The decision of the new president of Colombia, Gustavo Petro, after being sworn in, to order the transfer of Simón Bolívar's sword from inside the presidential palace to the outside, where the solemn act of his investiture was being held, has ended up splashing the presence of King Philip at the ceremony. 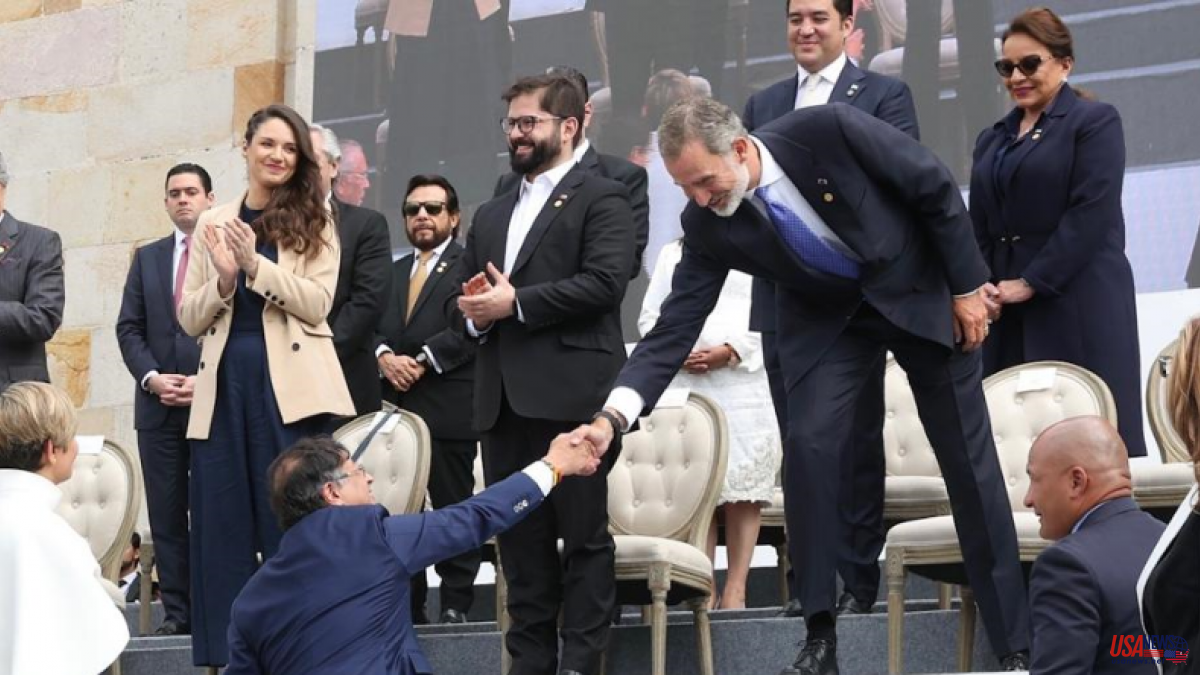 The decision of the new president of Colombia, Gustavo Petro, after being sworn in, to order the transfer of Simón Bolívar's sword from inside the presidential palace to the outside, where the solemn act of his investiture was being held, has ended up splashing the presence of King Philip at the ceremony.

Felipe VI, who yesterday returned to Palma after his lightning trip to Bogotá, remained seated, like other guests at the ceremony, while the sword, guarded by the Presidential Guard, accessed the platform where Petro had just been sworn in. The position of the King, which was limited to following the initial ceremony in which the entry into the scene of the sword did not appear, generated controversy in the accounts on Colombian social networks related to the sectors that compare the movement for independence of the 19th century with the current processes of the Latin American left against the oligarchy. These criticisms were replicated in Spain by leaders of Podemos such as the Minister of Social Rights, Ione Belarra, the spokesman in Congress, Pablo Echenique, and the former Vice President of the Government Pablo Iglesias, who took advantage of the occasion to disfigure the King's position and launch their darts against the Crown. Echenique has asked the Foreign Ministry, whose head José Manuel Albares accompanied the King, to clarify the monarch's gesture.

Felipe VI, first as Prince of Asturias and since 2014 as King, has traveled to Latin America on more than one hundred occasions, most with the aim of attending the different presidential relays, led, on some occasions, by left-wing or populist politicians. . The Head of State, who has not attended the latest relays in Venezuela and Nicaragua, always attends with the endorsement and mandate of the Government. Except for occasional protests from some radical sectors, the King has always been received by the outgoing and incoming leaders with respect and institutional cordiality. Just yesterday, the new Colombian president positively valued the presence of the King, with whom he held a meeting, in Bogotá

The sword of the liberator Simón Bolívar was not in the presidential palace because it was a symbol of the struggle for independence against colonial Spain, but because in 1974 it was stolen by the M19 guerrillas and later returned to the State, in 1991, after the signing of the first peace agreement under Colombian President César Gaviria. Petro has already placed next to the stage where he was sworn in the sculpture of the dove of peace created by the Colombian artist Fernando Botero for the signing of the peace agreements between the Colombian state, chaired by Juan Manuel Santos and the FARC, in 2016. In the solemn act of signing the agreements, which was held on September 27, 2016 in Cartagena de Indias, King Juan Carlos attended, on behalf of the Government and Felipe VI.

In recent days, the sword has been the subject of a great debate in Colombia since the outgoing president, the conservative Iván Duque, did not authorize it to leave the room of the presidential palace in Nariño where it is guarded to be in the decision-making possession of the leftist Gustavo Petro, but once the new president was inaugurated, he gave the order that the sword be moved to the stage where the transfer of powers took place.

Petro's decision to order the transfer of Bolívar's sword to have it with him at his inauguration, as reported by the Colombian media, has nothing to do with its historical character as the Liberator's weapon, which along with other great men of the 19th century starred in the processes of independence in Latin America from colonial Spain, nor was it a gesture against the presence of the King. Petro wanted, in his first decision as president, to mark distances with his predecessor and, at the same time, claim the relic as a symbol of the unity of Colombians and, incidentally, remember the brotherhood between the Ibero-American peoples. In his speech at his inauguration, Gustavo Petro reviewed those concepts but, unlike other Ibero-American leaders, he did not mention Spain or the colonial past. In fact, the different territories that until the beginning of the 19th century belonged to the Crown of Spain were not considered colonies but rather Spanish provinces, as evidenced by the fact that transatlantic deputies were present in the Cortes of Cádiz and it was precisely the 1812 Constitution that that inspired the first laws of the new countries once the civil wars that confronted liberators and royalists ended.

The M19, to which Petro belonged in his youth, stole the sword in a coup that gave visibility to the guerrilla struggles that were being waged in those years in Central America and other countries in the area and kept it in their possession until, in 1991, coinciding with the lead years of drug trafficking, the first peace agreement was signed, although the guerrillas were not dissolved until 2016. For the Colombian left, the relic is not a symbol of the 19th century struggle of the liberators against the royalists, but the symbol of the struggles of the Latin American left against the oligarchy.

On Sunday, by order of Petro, the first of his mandate, the ceremony was interrupted for almost an hour to give time for the sword to leave its place of custody inside the Nariño Palace and reach the adjacent square where the ceremony was taking place. act. "As president of Colombia, I request that the Military House bring Bolivar's sword, an order of the popular mandate of this president," Petro ordered in the middle of the ceremony. When the relic finally arrived, transported in its urn and carried by members of the Presidential Guard, the attendees chanted: "Alert, alert, alert, Bolívar's sword walks through Latin America", while the Colombians present and other Latin American guests Spontaneously, they got up as he passed under the stands where they were. The King, like other foreign guests, remained seated since the relic, despite its symbolic character, does not represent the State like the flag, the anthem or the coat of arms.