The second day of Joe Biden's visit to Israel was the most intense in his three days in the Holy Land. 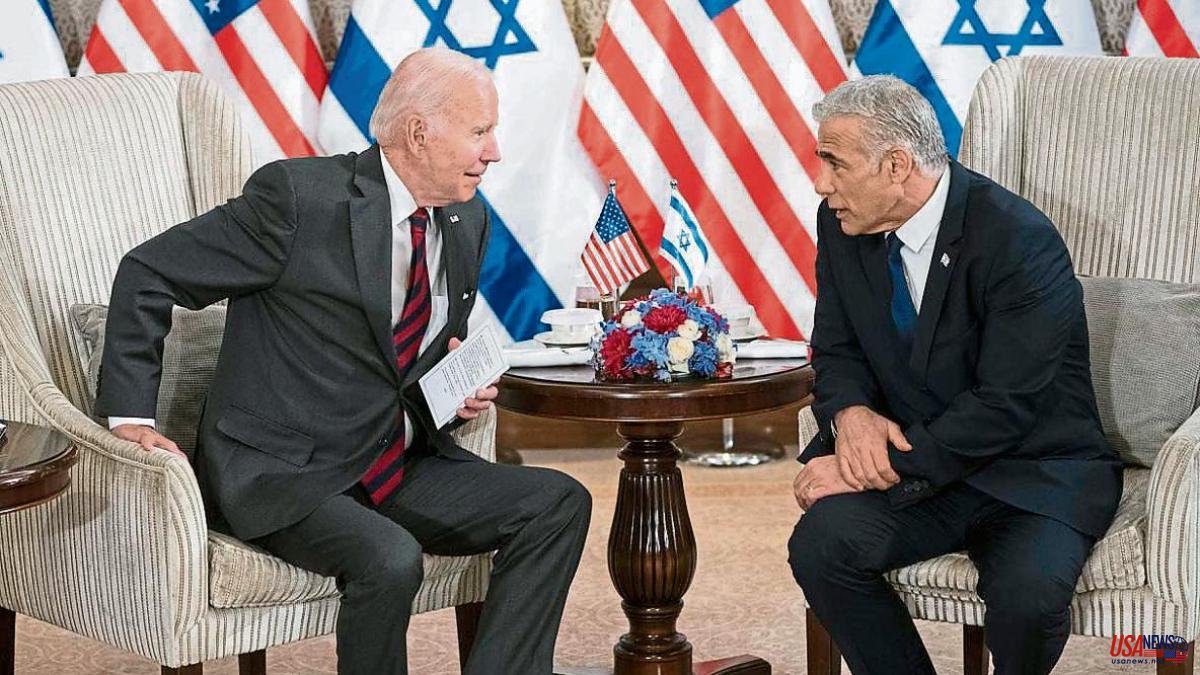 The second day of Joe Biden's visit to Israel was the most intense in his three days in the Holy Land. The US president kicked off the day with an extensive private meeting with the Israeli prime minister, Yair Lapid, where they discussed two central issues behind closed doors: Iran and Saudi Arabia. Later, they signed the Jerusalem Declaration, a joint memorandum to shield the strategic alliance between the two countries, which includes Washington's commitment to prevent Tehran from obtaining atomic weapons.

Late in the afternoon, the Reuters agency advanced that Saudi Arabia could announce during Biden's visit that it will allow Israeli aeronautical companies to fly over its territory. As well as saving enormous time and money for Israelis traveling to the Far East, it will be the first stone in the normalization of relations between Israel and Saudi Arabia.

The great aspiration of the Jewish State is to include the Sunni Arab giant in the process of normalization with Arab countries that began with the Abraham Accords, and the two parties are sending out signs that the formalization of relations could occur sooner than expected. There is also speculation that Riyadh could allow direct flights from Tel Aviv so Israeli Muslim Arabs can attend the annual pilgrimage to Mecca.

Biden, who also met opposition leader Benjamin Netanyahu, made it clear that it is in a bipartisan US interest to preserve historical ties with Israel. Despite the fact that the allies disagree on the mechanisms to stop Tehran's nuclear plans – whose uranium enrichment limits reached new records this week – the signing of the joint declaration establishes that “the United States. It will use all the elements in its power to prevent Iran from obtaining nuclear weapons.

The memorandum also includes a section that reinforces the historic annual donation made by the US to the Israeli army (38 billion dollars), to which an additional billion will be added to reinforce missile defense systems "for the consequences of the 2021 conflict”, referring to the latest war waged between the Tsahal and the Islamist group Hamas in Gaza.

The Jerusalem Declaration also affects the will to preserve the Jewish military superiority in the region; the urgency of fighting antisemitism; supporting Israel in the fight against the BDS (boycott, divestment and sanctions) movement; more initiatives to continue integrating its main ally in the region, or a clause that will exempt Israelis from applying for entry visas to the US.

Biden and Lapid participated at noon in a telematic forum together with Mohamed Bin Zayed, president of the United Arab Emirates, and Narendra Modi, prime minister of India, an initiative to build bridges in technological and scientific sectors.

The joint declaration signed by both leaders also dedicated space to the Russian invasion of Ukraine. A conflict in which Israel avoided interfering to preserve its strategic interests in Syria –with the presence of Russian troops–, where it frequently carries out bombings against pro-Iranian targets. "USA. The US and Israel reiterate their concern regarding the attacks in Ukraine, and their commitment to the sovereignty and territorial integrity of their territory, as well as the importance of continuing humanitarian aid to the Ukrainian people," the statement said.

Regarding the Palestinian question, an issue to which he has barely devoted time since his inauguration, the Biden team expressed its "commitment to continue discussing the challenges and opportunities of relations between Israelis and Palestinians", as well as a resounding condemnation of Hamas and the terrorist attacks that have occurred in recent times.

The US president will travel to Bethlehem tomorrow, where he will be received by the Palestinian president, Mahmud Abas. The Israeli human rights organization Betselem hung huge banners at the entrances to the city: "Mr. President, this is apartheid." In addition, local activists posted portraits of the late Palestinian journalist Shireen Abu Aqleh, who was killed during an Israeli army raid in Jenin.

Despite the fact that pro-Palestinian activists accuse him of helping to perpetuate the status quo of the conflict, Biden affirmed his "support for a two-state solution and a reality in which Israelis and Palestinians can equally enjoy security, prosperity and freedom." Ideologically, Lapid is also in favor of the stalled path of the two states, but the Jewish political crisis makes it difficult for now to resume negotiations.