Back home, the respite from everyday worries that a trip abroad offers is over. 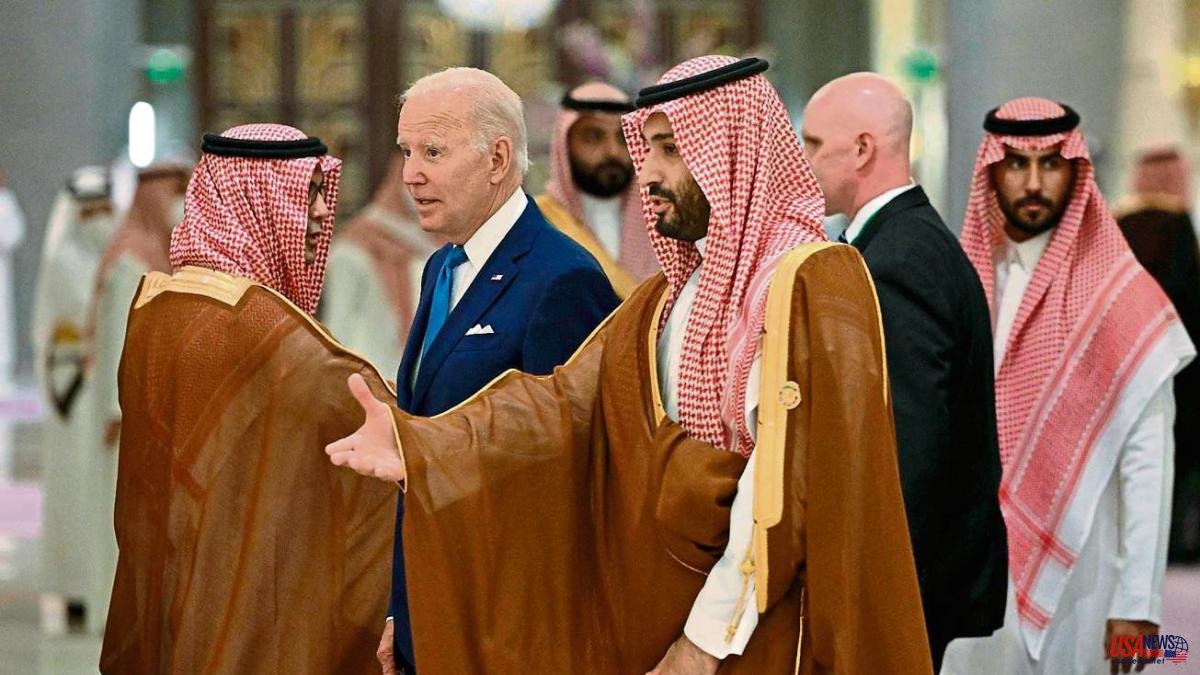 Back home, the respite from everyday worries that a trip abroad offers is over. The president of the United States, Joe Biden, has to plunge back into the usual domestic problems, which are piling up on him.

Even raised to a higher power, without the condescension that the parenthesis of a visit abroad normally offers.

His route through the Middle East is overshadowed by the striking photograph – “embarrassing” for many – of the greeting with Prince Mohamed Bin Salman, the de facto ruler of Saudi Arabia whom he once called a pariah for, according to the CIA, ordering the death by journalist Jamal Khashoggi. The columnist for The Washington Post and critic of the Saudi regime was dismembered.

In this week outside of Washington, "wild" inflation has shot up to 9.1%. Gasoline remains at very high prices. His colleague Joe Machin, the supposed Democratic senator (or the enemy at home), has once again ruined his alternative energy investment plan. He increases the pressure in favor of abortion. And, to dress this indigestible salad, the debate among his people about his age has exploded in all its dimensions, with a majority in his party that considers him too old for another term.

This is the welcome. The president returns to the US with agreements that benefit Israel's fit in the Arab world, with truce agreements in the war in Yemen (another Saudi cross on human rights), or alliances to curb Iran's nuclear development , as well as a verbal blow on the geopolitical chessboard.

Biden launched a warning to China and Russia this Saturday, in an attempt to rebalance the influence of the United States in the region and fill a void that his own administration strengthened. "We are not going to leave," Biden replied this Saturday in Yida, at the summit with the six Gulf countries (Saudi Arabia, Qatar, Bahrain, Kuwait, Oman and the Emirates), plus Jordan, Egypt and Iraq. “We are investing to build a positive future in the region, in collaboration with all of you. America is not going anywhere,” he promised before signing off.

To ordinary citizens, those who observe that with the same money they put less food on the table or only allow them to half fill the car's tank, that speech sounds hollow. What they would like to hear is that, as a result of this trip, the price of gasoline falls. That was one of the main objectives, to find a palliative to the pitfalls caused by the war in Ukraine.

For now, however, there is only the promise – and in those desert territories the wind blows hard and blows away good intentions – that these countries will increase production. The most Biden could say is that the results will be seen "in the coming weeks."

"With production capacity nearing full, Riyadh will not be able to make a significant dent in prices," analyst Dalia Dassa Kaye said.

Senior officials in the White House recognized that this trip, specifically the last stop in Yida, meant assuming a political cost. But they calculated that the alliance with Saudi Arabia is too important to leave in limbo. "It is better that we are present even if it hurts," they stressed. In the long term it will be profitable, they added.

In the closeness test, and do not forget that politicians live by immediacy, all that philosophy has collapsed with the image of Biden greeting Prince Bin Salman. The conclusion is soon drawn that this is a failed trip, cut short by the impact of that photograph.

“The fist bump between Joe Biden and Mohamed Bin Salman was worse than a handshake. It was embarrassing," Fred Ryan, editor of The Washington Post, said in a statement. "He projected a level of intimacy and comfort that offered MBS (an acronym for Prince) the unwanted redemption he has been desperately seeking," he added.

"It sends a clear message to the tyrants of the world: You can always count on the United States to betray its values ​​and reward bad behavior," said Saudi academic Abdullah Alaoudh.

As if this were not enough, the Saudis did not remain silent and left Biden's version of the meeting with the prince in a bad place, in which he told him that he was responsible for Khashoggi's death. Saudi Foreign Minister Adel al-Jubeir told reporters that he had never heard Biden make a direct accusation. Just a reflection on human rights to which Bin Salam replied by recalling the US abuses in the Iraqi prison of Abu Ghraib or the silence due to the recent death of the Palestinian-American journalist Shireen Abu Akleh, in the West Bank.

White House spokesman John Kirby came out this Saturday to reiterate that "the president was very clear in his conversation."

More than a political visit, Biden did an exercise in tightrope walking.