Nothing Joe Biden does and says about the immigration challenge convinces and will not convince everyone. 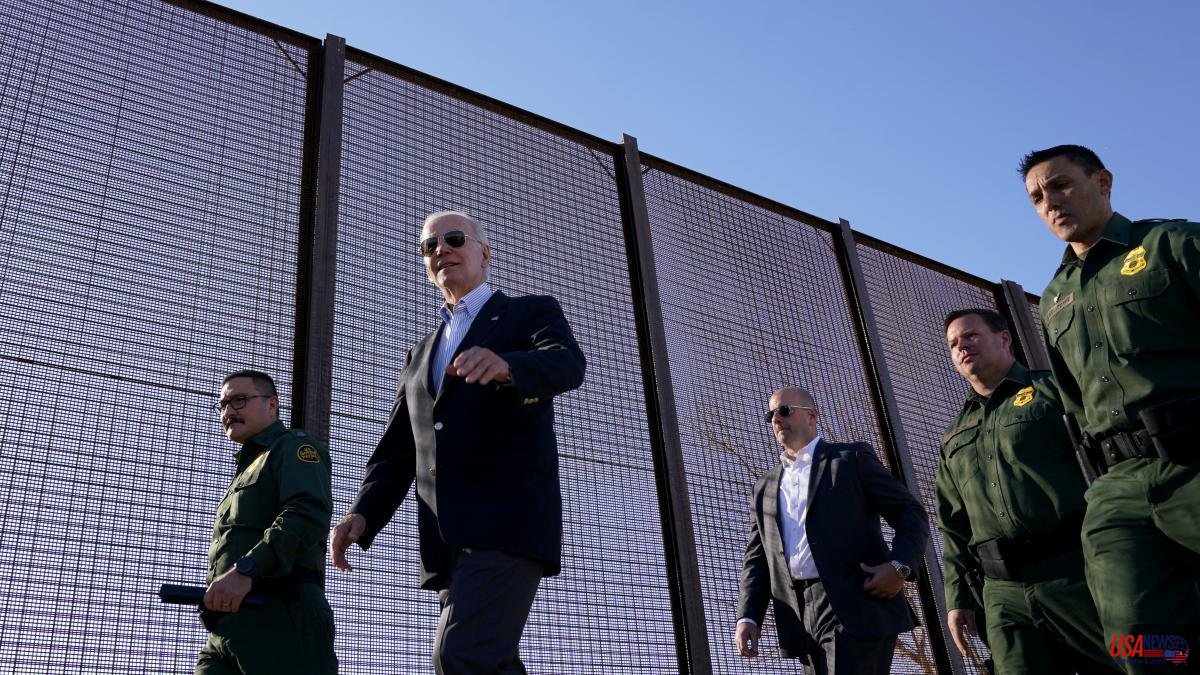 Nothing Joe Biden does and says about the immigration challenge convinces and will not convince everyone. On the contrary, all this costs him harsh criticism from Tyrians and Trojans; of Republicans and Democrats. That is why his visit yesterday to the US-Mexico border in El Paso, Texas, was the most difficult of all he had made to date in his tenure.

The American leader traveled to the border – for the first time since his arrival at the White House two years ago – partly to face the most difficult of the problems he faces and partly to defend the controversial carrot and stick plan that announced on Thursday with the dual purpose of toughening policies against illegal immigration and facilitating legal entries from countries in crisis and with authoritarian regimes.

Specifically, up to 30,000 migrants from Venezuela, Nicaragua, Cuba and Haiti will be able to enter the US each month, after processing applications online, if they have a "sponsor" who supports them. In addition, those who are in Mexico and want to opt for legal entry into the US will be able to register through a new application to obtain an entry appointment and request for asylum at any border center.

Those who cross illegally, on the other hand, will be returned hot under a new rule that reinforces the application of "accelerated repatriations", with a ban on re-entry to the US for a period of five years. For now, such returns will be ordered under Title 42, adopted by Donald Trump in March 2020 to prohibit the entry of migrants for public health reasons after the outbreak of the pandemic. The Supreme Court resolved on December 27 to accede to the demands of 19 republican states that asked to maintain this precept, despite overcoming the covid crisis.

Title 42 was to cease to apply on December 21, per an earlier court order. And that forecast led to tens of thousands of people from all over Latin America concentrating on the border between Ciudad Juárez, in Mexico, and El Paso. Not a few crossed the Rio Grande. And between December 1 and 19 alone, Customs agents detained more than 70,000 migrants.

When Title 42 lapses, as the government halfheartedly defends and after having used it to expel more than 1.2 million foreigners, the Administration will maintain "expedited repatriations" under Title 8, the standard rule for expelling those whom the right of asylum is not recognized.

The hardening of the policy against illegal immigration is accompanied by a plan agreed with the Mexican president, Andrés Manuel López Obrador, by which his country commits to accept 30,000 migrants who have been deported from the US.

Republicans see Biden's measures as "soft". The matter constitutes one of the main flags of the conservatives, if not the most important, in their opposition to the president. The ultra wing of the party wants the head of the Secretary of National Security, Alejandro Mayorkas, for his immigration management.

Now, with his view of El Paso, Biden replies to the Republicans that he has already been to the border and knows the problem firsthand; that he has already taken measures to alleviate it and that he is willing to agree on a legislative package that addresses the roots of the challenge with long-term solutions. "And you, what do you offer?" Is his message to the conservatives. Because, if what they want is to close the borders to the letter, they will have to tell the voters clearly, he argues. And in any case, it is necessary to agree on a realistic law in Congress, he insists.

Donald Trump's party anticipated these and other foreseeable criticisms yesterday with a preemptive attack on the president before his arrival at the border: "Since his first day in office, Joe Biden has put drug smugglers and human traffickers ahead of families. His visit to El Paso is nothing more than a photo op,” said the head of the Republican National Committee, Ronna McDaniel.

But many Democrats also reject, from the opposite point of view, Biden's proposals in this area; including the plan he announced Thursday. "Continuing to use the failed and inhumane immigration policy of the Trump era will not serve to restore the rule of law at the border," said four Democratic senators led by the chairman of the House Foreign Committee, Bob Menéndez.

Police continued to make arrests yesterday in El Paso. Upon his arrival there, Biden inspected a busy border crossing and watched as agents search vehicles. Earlier, the ultra Republican governor of Texas, Greg Abbott, gave him a letter blaming him for the overflow at the border.

"This chaos is a direct result of his failure to enforce the immigration laws" of the United States, the governor says in the text.

From El Paso, Biden was going to travel to Mexico on Sunday night to meet there this week with Obrador and Canadian Prime Minister Justin Trudeau.