Bertone: "I tried to convince Benedicto not to resign, but it was useless"

Cardinal Tarcisio Bertone (Romano Canavese, 1934) was for years the loyal Secretary of State of Benedict XVI –the most important position in the Vatican after the Pope–, as well as a camerlengo, for which he was in charge of the administration of the Holy Headquarters from his resignation until the election of Francisco. 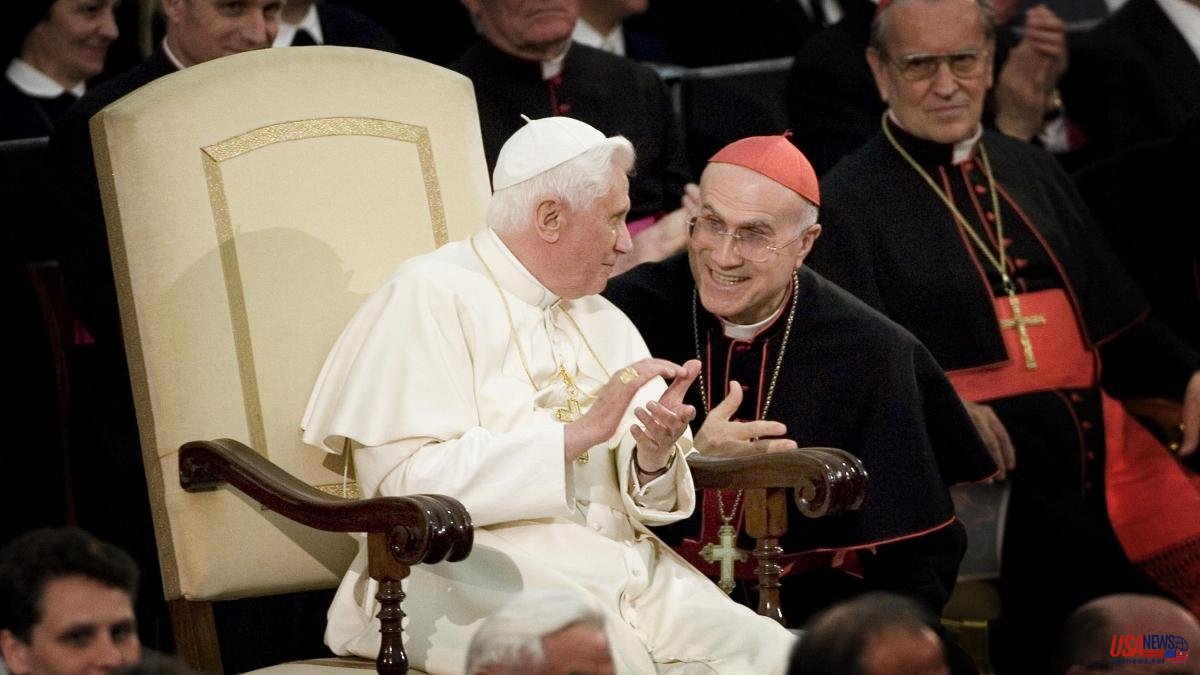 Cardinal Tarcisio Bertone (Romano Canavese, 1934) was for years the loyal Secretary of State of Benedict XVI –the most important position in the Vatican after the Pope–, as well as a camerlengo, for which he was in charge of the administration of the Holy Headquarters from his resignation until the election of Francisco. A close associate of Ratzinger for years, he was one of the first people he told of his intentions to back off. This Wednesday he received La Vanguardia in his apartment inside the Vatican, hours before the burial of the emeritus pope.

Cardinal, you were Secretary of State for Benedict XVI for years. How would you define his pontificate?

Brief but intense, lived from an intellectual purpose and by a servant who is passionate about the Church, in love with Christ and the creator of a fruitful dialogue between faith and reason, between heart and reason. Tenderly offered to people of all classes and origins, the heritage of his teaching will remain an enduring gift to the Church and to society.

Benedict will always be remembered as the first modern pope to resign. Do you remember how he found out about this decision, and what his reaction was?

His decision already appeared in a conversation at the end of April 2012. I thought it was a passing thought so, at first, we did not return to the subject. But later, in the month of August in Castel Gandolfo, he told me very seriously that he had consciously made this decision in prayer and meditation. I was anguished and immediately spoke of the consternation that would have struck the entire Church, and not only, and I conveyed to him the reasons that seemed to me contrary to an eventual resignation. I tried to convince him not to give up, but it was useless. He was firm in his project and was convinced to fulfill the will of God. So I tried to delay public communication as long as possible, also because I had promised to conclude the trilogy on Jesus of Nazareth with the third volume on the childhood of Jesus and then because I had to conclude the year of faith. When the project had to be finalized and the residence for the emeritus papacy had to be chosen and adapted for the small community that would accompany it, it was necessary to explain to some of the people involved the news of the true function of the monastery, that it would no longer be a residence for contemplative nuns. . As is known, the ad was launched on February 11, 2013, which commemorates the apparitions in Lourdes, almost pointing out her physical weakness and her real impossibility of supporting the government of the Church at that historical moment, and in the climate of the events.

How did Benedict XVI experience the scandals that ended in the Vatileaks process?

With much pain and astonishment, even though they came from afar, even before his election as pope. It touched him deeply, both to him and to his collaborators, but the temperate pontiff, distinguished professor of Theology, also became a courageous reformer. In fact, it was with Benedict XVI when the financial convention with the European Community was signed and when a harsh anti-blockade decree was published and to reinforce financial transparency in the Vatican economic administration.

And the fight against sexual abuse in the Church?

In this field he was very attentive and purposeful. Already as prefect of the Congregation for the Doctrine of the Faith, and later as pope, he confronted the sad phenomenon of pedophilia in the clergy both with the promulgation of the harsh legislation of the new criminal law and when the Doctrine of the Faith assumed the powers relative, to unify the measures and not leave them to the discretion of the local authorities, but applying them rigorously according to certain criteria and in dialogue with the evolution of civil society. It should be added that Pope Benedict XVI wanted to create a commission of experts to deepen the problem of pedophilia and study the possible recovery of people, including priests, affected by this deviation.

His contribution was essential for the consecration of the Sagrada Família. What memories do you have of that day in Barcelona?

I already came to Barcelona on April 25, 2010 for the beatification of the founder of the Capuchin Sisters of the Mother of the Divine Shepherd, Josep Tous, and I remember giving a nice interview to La Vanguardia. While we were preparing this celebration, the local authorities and especially the Cardinal Archbishop Lluís Martínez Sistach had benevolently insisted on inviting the Pope, an admirer of Gaudí, to come himself to inaugurate the Sagrada Família basilica. Intertwined with the Compostela holy year, the double trip to Santiago de Compostela was organized on November 6 and to Barcelona on November 7, to consecrate and dedicate the church of the Sagrada Família, which was contextually elevated to a minor basilica. The Pope, who had a deep artistic taste, presided over the celebration with a devotion and a solemnity that impressed everyone and immortalized with a famous homily. The memory of that day cannot be erased and there is no doubt that since November 2010 pilgrims and tourists visiting the Sagrada Família have multiplied due to the admiration aroused throughout the world.

What do you think of the coexistence between an effective pope and an emeritus? How has it developed in these almost ten years?

It is certainly an unprecedented situation that has been experienced wisely by both Pope Francis and Pope Benedict. The figure that has dominated their relationship and has modulated the government of the Church has been that of reciprocal respect and affection, with the seal of absolute freedom in the respective behavior. First of all, in the exercise of the Petrine ministry by Pope Francis and later in the accompaniment of prayer and support for the unity of the Church by the emeritus pope, Benedict.

What impression did you have when you saw thousands of faithful visit the body of Benedict?

It seems to me that the influx of the faithful to Saint Peter's Basilica to honor Pope Benedict is a concrete and heartfelt response to his tenderness as a good shepherd and to his paternal and fraternal love without borders. His kindness in his treatment, underlined by Pope Francis, was experienced by all those who approached him in all parts of the world, from men of science and heads of nations, to children on the occasion of their First Communion... He showed he listened and appreciated everyone.