The emeritus pontiff, Benedict XVI, will be buried in three coffins, as is traditional for popes, and the liturgical celebration of his funeral "broadly follows the model of the funeral of a Supreme Pontiff. 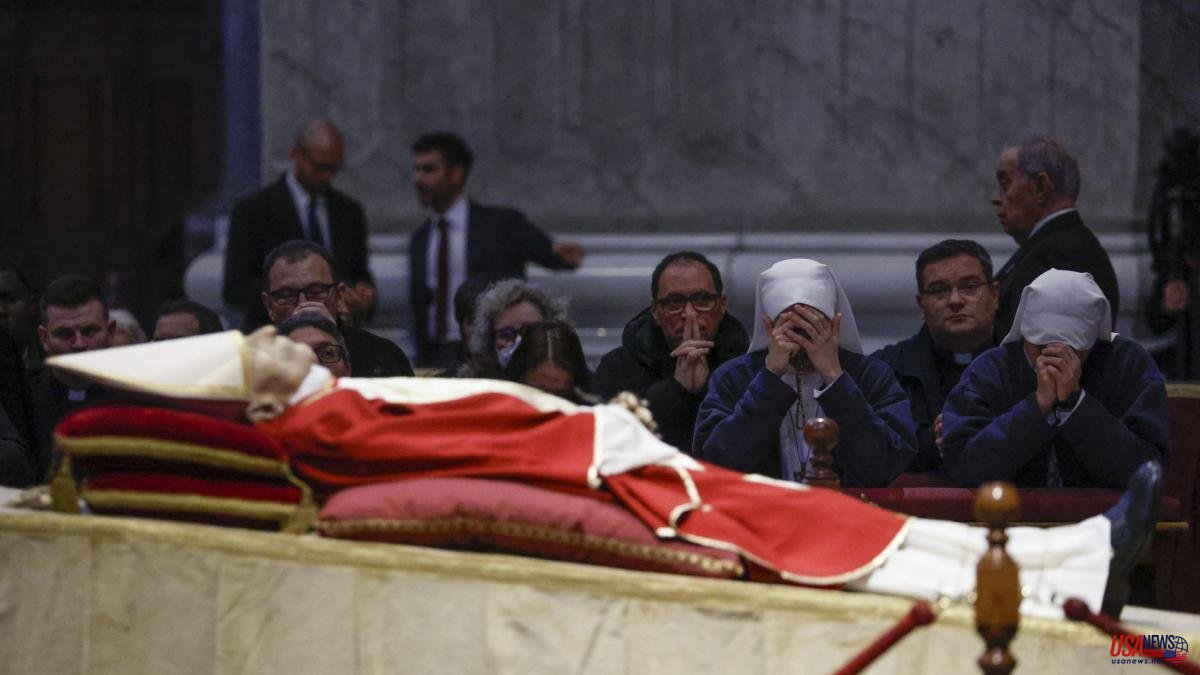 The emeritus pontiff, Benedict XVI, will be buried in three coffins, as is traditional for popes, and the liturgical celebration of his funeral "broadly follows the model of the funeral of a Supreme Pontiff." This was stated on Tuesday by the spokesman for the Holy See, Matteo Bruni, speaking of the funeral mass for Joseph Ratzinger, which will take place this Thursday in Saint Peter's Square, five days after he died at the age of 95 in his residence. , the Mater Ecclesiae Monastery in the Vatican Gardens.

"The basis is the liturgical celebration of a Supreme Pontiff, with some original elements and others that are missing, those that have to do with the reigning Pontiff," the spokesman explained to the accredited journalists. For example, there will not be the final sentences that are very specific about the Pope in office, those of the diocese of Rome and those of the Eastern Churches.

When the German, the first pontiff to resign in 600 years, died, the big question was how the Holy See was going to do it to offer funerals worthy of a pope but without generating confusion with the role of Francis. Little by little doubts have been cleared up. The feeling is that the Vatican wanted to organize a funeral with a lowered tone, much simpler than that of the imperial John Paul II, following the will of Benedict XVI who wanted a sober farewell.

The funeral, for example, will not be a state funeral and only the delegations from Germany – the theologian's native country – and Italy – the host country – are officially invited. The rest of the authorities who wish to come will do so in a private capacity. On behalf of Spain, Queen Sofía and the Minister of the Presidency, Félix Bolaños, in charge of relations with the Church, will attend. The interest is huge: more than 600 journalists from all over the world are accredited for the event.

The text of the liturgical celebration of the funeral is not improvised but has been prepared ahead of time, reports Bruni, who, however, has not specified if it was something that had been organized throughout these almost ten years of Benedict XVI's retirement. The mass will be officiated by the current dean of the College of Cardinals, Cardinal Giovanni Battista Re, something usual since the Pope suffers mobility problems due to knee pain, and presided over by Francisco, who will deliver the homily.

Like all popes, Ratzinger will have a triple coffin: cypress, zinc, and wood. His body will be closed tomorrow, after the end of the public wake in St. Peter's Basilica, in the cypress one, which will be used at the funeral the next day. Inside it will be placed the medals and coins minted during his pontificate, in addition to the canopies he wore during his ecclesiastical career and a text describing his papacy, in Latin, inserted in a metal cylinder.

On Thursday, shortly before nine in the morning, the coffin will leave the basilica to allow the faithful to pray the rosary. Then, at the end of the mass, he will be transferred to the Vatican crypt for burial. Another ritual will then take place, where a ribbon will be placed around it with the official seals. Then it will be placed in the second zinc coffin, which will be welded and sealed, and finally inside a wooden box that will be buried inside the empty tomb that was used by his admired predecessor, John Paul II, before he it was transferred to the basilica after his beatification, in 2011. According to Ratzinger's authorized biographer, Peter Seewald, this was the place the German preferred.

This Tuesday tens of thousands of faithful continue to parade to pay their respects to the pope emeritus, exposed since yesterday in the central nave of St. Peter's Basilica, in a catafalque located under the Altar of Confession and next to the famous canopy by Gian Lorenzo Bernini. The Hungarian prime minister, the far-right Viktor Orbán – who is not exactly a fan of Jorge Mario Bergoglio – attended in the morning, being one of the first international leaders to do so. During the entire day, the Vatican gendarmerie counted some 70,000 visitors, a slightly higher number than yesterday, when 65,000 people went to pay homage.