Benedict XVI: the secret of an authentic look

An SMS message, a system I barely used anymore, made my cell phone ring on the desk in my office at the Instituto Cervantes in Rome. 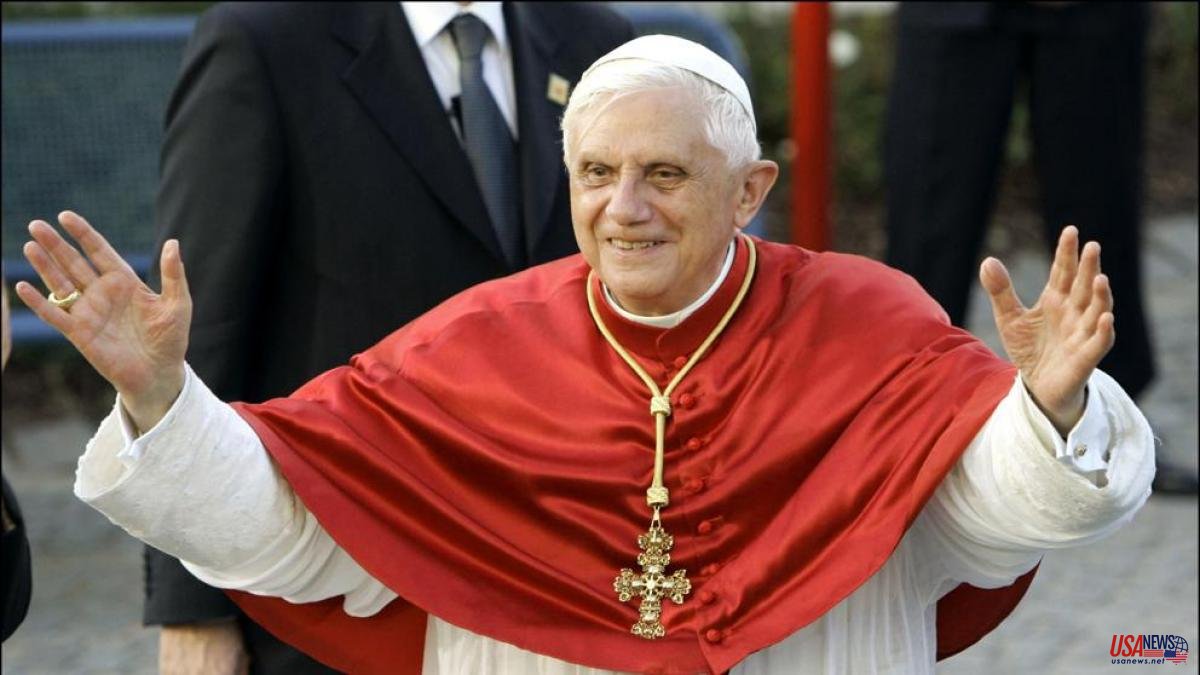 An SMS message, a system I barely used anymore, made my cell phone ring on the desk in my office at the Instituto Cervantes in Rome. It was 11:04 in the morning, on February 10, 2013, and it came from a cardinal friend who was in the Clementine Room: "Pope Benedict XVI has resigned." The source was reliable, so I conveyed the news to the Spanish ambassador to the Holy See, Eduardo Gutiérrez, and to the Archbishop of Barcelona, ​​Cardinal Martínez Sistach, who was meeting with the bishops of Tarragona. They were both stunned. And at that very moment in the Roman sky, almost clear, a strong storm broke out that had its peak at 7:30 p.m. with a lightning strike that struck the dome of Saint Peter's Basilica, symbol par excellence of the papacy.

My thoughts flew at that moment at the same time on November 7, 2010, when I was able to receive Communion from the hands of Benedict XVI at the inauguration of the Basilica of the Sagrada Familia, in Barcelona. I remember his look, serene and transparent, in small eyes. During the subsequent acts of that same day I was able to meet my gaze again with that of the German Pope. Indeed, they were small but lively, behind which a shy but intellectually restless personality hid. “Luminous”, added a year later a great gypsy friend who was able to meet the Roman pontiff, when on June 11, 2011 we attended a meeting in Rome with gypsy communities from all over Europe. “This man tells the truth,” he added. And it is that the gypsies maintain, since long before criminology scientifically demonstrated it, that people who lie cannot avoid dilating their pupils. Quite the opposite of that industrious theologian.

Accompanying various Spanish personalities in private audiences, before and after their resignation, I have just confirmed my intuitions. In one of them, in addition to a strudel bought in the Nomentano neighborhood, he was given a Virgin of Montserrat that he had bought in secret, days before, in the cloister of the Barcelona cathedral. He was delighted to know that it was a replica of the one that he accompanied another German, Carlos V, throughout his life, whom he admired. Benedict XVI was not by vocation a pastor or a ruler, but a theology professor who exercised the magisterium through the various services that the Church asked of him. He spoke with ease, in equal parts, about the fathers of the Church (especially Saint Augustine) and its current context. Despite the idealistic philosophical context in which he was formed, that theologian raised interior conversion, transmission by testimony, living in communities and exemplarity in the faith-culture dialogue or, in Augustinian terms, to transform civitas terrena into civitas dei.

Joseph Ratzinger always wanted to be a priest and bishop, but never of Rome. He overcame his shyness with an effort, because he didn't like the lights, until those forces failed him. He was humble, introspective and hardworking, not without a subtle sense of humor. He could or could not like it, but he was not fooling anyone: it was always him. The light never changes: only the intensity.

If there is one word that can define Benedict XVI, it is authenticity. He did not deceive anyone when he assumed his ministry, when he defined himself as "a humble worker in the Lord's vineyard", nor when he resigned, acknowledging that he lacked the strength to govern the Church, among other things to initiate the reform of the Curia. . Vigor was the most repeated word in his declaration of resignation from the papacy. A gesture, by the way, praised by all but imitated by no one. From that moment he lived "separated from the eyes of the world", supporting the work of Pope Francis through prayer. Even so, he still drew strength for some personal encounters, such as the one he had on March 13, 2016 with Ana Amado, the Spanish girl who was saved in 2004 from terminal cancer through the intercession of her prayers at the beginning of his pontificate. . That day her gaze shone like never before: the Augustinian interior light had been the Balthasarian light of the world thanks to her humility, her perseverance, her generosity. The same humility and generosity with which Christianity has celebrated Christmas for two thousand years, in which the theologian Joseph Ratzinger, Pope Benedict XVI, will see "the definitive judge of my life, who is not only the just judge, but also my lawyer”, as he wrote on February 8.