The circular winds of history flew over St. 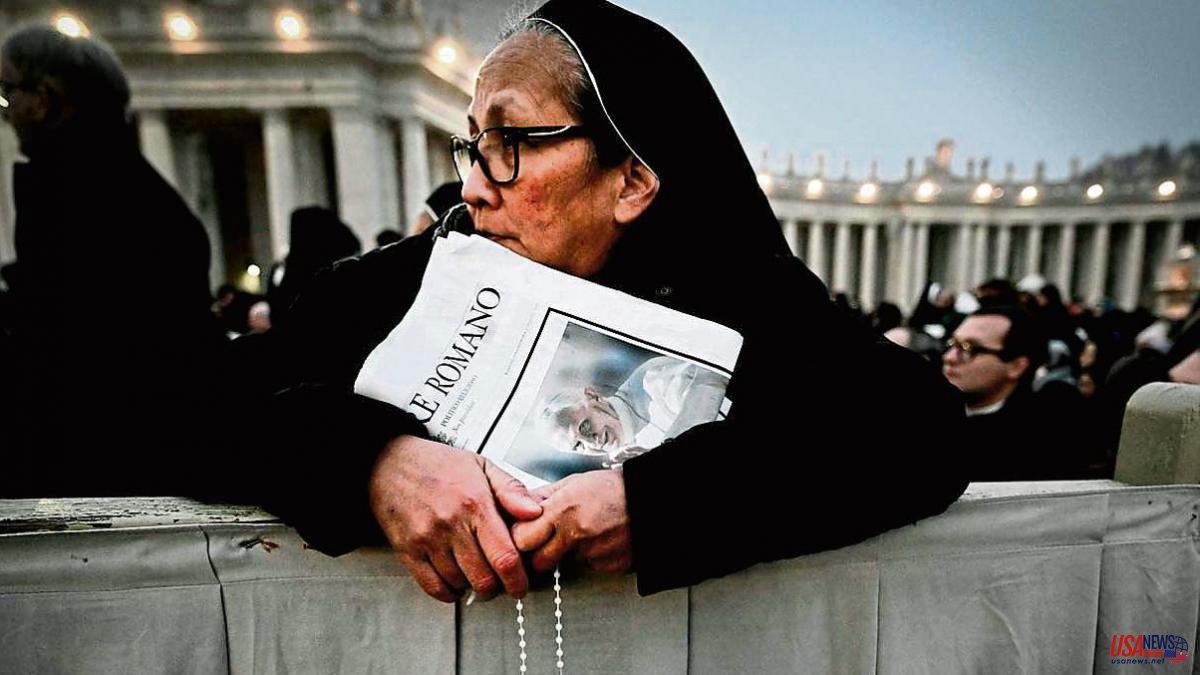 The circular winds of history flew over St. Peter's Square in the Vatican yesterday, where the funeral of Pope Emeritus Benedict XVI, presided over by Francis, awakened the memory of the farewell to John Paul II in that same square in a funeral ceremony he officiated the then Cardinal Joseph Ratzinger.

In that April of 2005, there was intense expectation. The death of the Pole Karol Wojtyla had left the see vacant, and the Catholic Church was preparing for the conclave –soon, the German cardinal would be elected the new pontiff–, in an atmosphere very different from that of now, in which the disappearance of Benedict XVI basically implies the end of an era of complex balance between a practicing pope and a retired pope.

Although during these almost ten years of coexistence Francis said of Benedict XVI that "it's like having your grandfather at home, your wise grandfather", the homily he delivered yesterday at the requiem mass was sparing in homage and emotion towards the deceased. He will probably have disappointed the admirers of the intellectual and pastoral figure of Joseph Ratzinger.

Francis spoke for seven minutes, which he dedicated to reflections on Jesus crucified and, implicitly alluding to the deceased, on "the pastor's awareness that he cannot bear alone what, in reality, he could never bear alone and, for this reason, he is capable of abandoning himself." to the prayer and care of the people entrusted to him”. As a climax, Francisco said at the end: "Benedict, faithful friend of the Bridegroom, may your joy be perfect when you hear his voice definitively and forever."

More intense and personal was the homily that Joseph Ratzinger dedicated to John Paul II at his funeral on April 8, 2005, which was attended by this chronicler, then correspondent in Rome. After almost 27 years of pontificate, the Polish Pope was a global leader of multitudes, and Ratzinger had been his prefect of Doctrine of the Faith for 23 years. The bond between the two was deep.

"We can be sure that our beloved Pope is now at the window of the Father's house, he sees us and blesses us," Cardinal Ratzinger said, pointing to the window of the Apostolic Palace from which John Paul II used to look out. His homily lasted twenty minutes. Among the 164 cardinals who concelebrated was Jorge Mario Bergoglio, then Archbishop of Buenos Aires.

Despite the fact that yesterday's ceremony cannot be considered a state funeral due to the emeritus status of the deceased, which also led to the suppression of certain prayers from the ritual that mention the vacant see or the death of a practicing pontiff, there have been great similarities with the funeral farewell given to Karol Wojtyla 17 years and 9 months ago. The open Gospel remains on the retina placed on the cypress coffin, or the burial itself chosen by Joseph Ratzinger.

The pope emeritus was buried in a triple coffin (cypress, zinc, oak) in the same tomb in the Vatican grottoes where John Paul II and before him John XXIII rested, until their respective transfers to the basilica (in 2011 and 2001). after being beatified. Francis canonized both popes in 2014, and it remains to be seen if that tomb reserves a similar fate for Joseph Ratzinger. Yesterday, among the 50,000 people present in Saint Peter's Square, some voices were heard asking to make him a holy subito (holy already), in a copy of the words dedicated in 2005 to Wojtyla. At this time, it seems more plausible that due to his enormous stature as a theologian he will one day be proclaimed a Doctor of the Church.

With the solemn obsequies and burial of Benedict XVI, an unprecedented situation in the 600-year history of the Catholic Church comes to an end, and a new stage opens for Pope Francis after almost a decade of pontificate. At 86 years old, Jorge Mario Bergoglio is now definitely the only one. In the eyes of Catholics and the secular world, he is already the only man wearing a white skullcap in the Holy See's palaces of power. It can be inferred that he will feel freer now that the most conservative wing of the Church will not be able to use Ratzinger's words and gestures against him.

At the same time, the absence of an emeritus augurs new debates about a possible resignation of Francisco, a resignation that he himself signed and delivered at the time to the then Secretary of State, Cardinal Tarcisio Bertone, in case of permanent impediment for medical reasons. A new era begins, in principle of more normality.