Battle for the yellow jersey in Brazil

Verónica, who sells books and souvenirs at the airport in Belém, the capital of eastern Amazonia, has placed the navy blue shirt of the Brazilian soccer team, which she sells in her stall, over the famous green and yellow shirt. 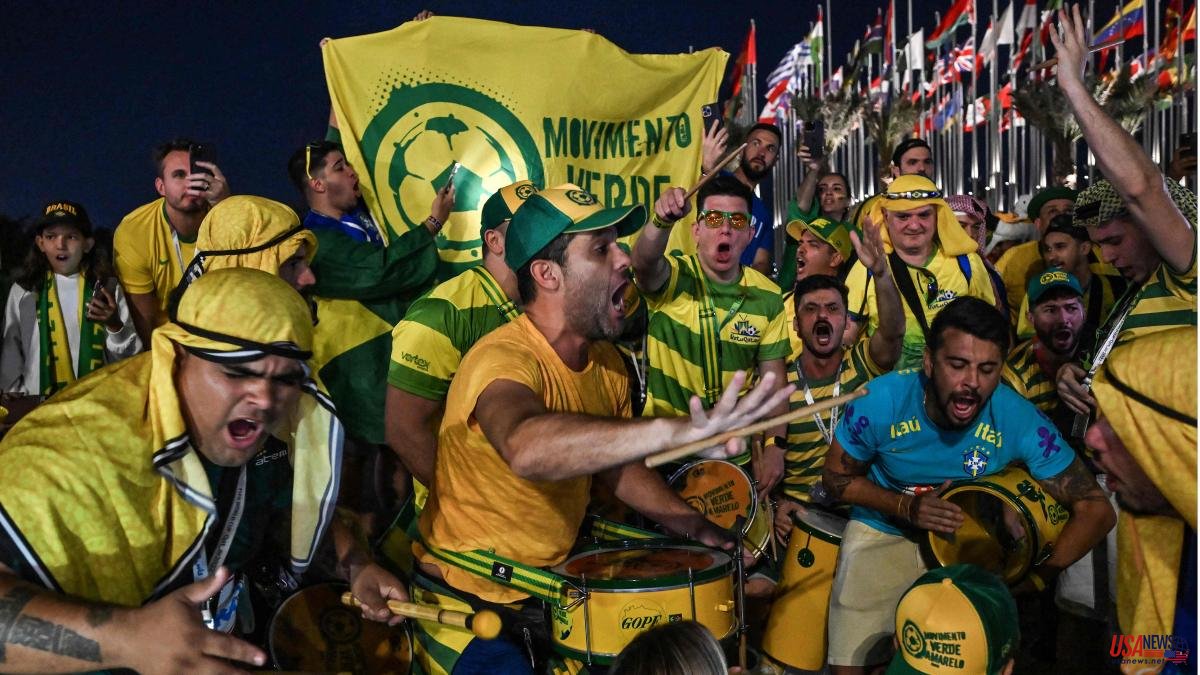 Verónica, who sells books and souvenirs at the airport in Belém, the capital of eastern Amazonia, has placed the navy blue shirt of the Brazilian soccer team, which she sells in her stall, over the famous green and yellow shirt. It would be an inconceivable showcase design in other soccer World Cups. After all, the yellow jersey – canarinho – is an object of sacred desire in Brazil. It evokes the triumphs of Garrincha and Pelé, in the 60s and 70s; Socrates and Zico, in the 80s; Romario and Rivaldo, in the 90s; and Ronaldo and Ronaldinho in the 2000s.

But now, on the day of Brazil's first match in the World Cup in Qatar, the yellow shirt, as well as the national flag itself, continues to be hijacked by the supporters of the defeated president Jair Bolsonaro. Determined to deny the legitimacy of Luiz Inácio Lula da Silva's victory in the October 30 elections, they take to the streets every two or three days to demand military intervention. "Lula thief", shouted a thousand Bolsonaristas in front of the barracks on the entrance road to Belém, as in hundreds of other cities. "Fraud!" Others spat. Many wore yellow shirts with the number 22 of Bolsonaro's expired candidacy.

The Bolsonaristas, then, are already dressed for the World Cup. For the rest, however, putting on the canarinho shirt, as is customary at millions of churrasco parties held during national team matches, poses a strong political and ethical dilemma. "There are people who look at the shirts and say: 'For God's sake! Not yellow! says Veronica. They prefer blue."

The soccer team shirt is a kind of indicator of the Brazilian psychological state. It was adopted to overcome the trauma of the so-called maracanazo in 1950, when the national team lost the final against all expectations before more than 170,000 fans at the Maracana stadium in Rio de Janeiro. At that time, the national team played dressed in white, a color "devoid of moral and psychological symbolism," according to a Rio newspaper cited in the book Futebol, by Alex Bello. That is where the green and yellow shirt with light blue shorts was born, the three colors of the national flag. Two decades later, at the 1970 World Cup in Mexico, the first broadcast in color, the shirt would forever be identified with the beauty of Brazilian soccer. It also became the symbol of an emerging power and a seemingly united society, with black geniuses like Jairzinho and Pelé playing in perfect harmony with whites like Tostão and Rivelino. The canarinho even covered, to some extent, the reality of a cruel military dictatorship installed after the 1964 coup.

More than half a century after that historic final, Brazil is going through a phase of unprecedented polarization, with strong identity, class and ideological tensions. Lula's victory, far from uniting the country, seems to have divided it further. The only hope left is the unifying power of the World Cup to heal the wounds. "There is the possibility of a truce (...) The World Cup tends to create an atmosphere of fraternization," speculates the Folha de São Paulo newspaper. “Don't worry,” says a seller of T-shirts and flags in Salinópolis, some 200 kilometers from Belém. This is no longer Bolsonaro's flag, it is the flag of the cup”.

But the Bolsonaristas are not throwing in the towel or the flag. They continue on the streets wearing yellow T-shirts emblazoned with the slogan “Brazil first and God first” and the name of the most valuable signing of the coup movement: Neymar. It is not the first time that a right-wing politician has tried to seize the symbology of the national team. It was done after the 1970 victory by the then president, General Emílio Garrastazu Médici, who, like the other soldiers of the dictatorship, is often praised in demonstrations in favor of a new military coup. “I have interviewed political prisoners who tried to reject the Brazilian team because they knew Médici would benefit, but when they saw the games they couldn't,” says Ronaldo Helal, a sociologist specializing in soccer at the Federal University of Rio de Janeiro.

Once democracy was restored after the signing of the Constitution in 1988, Fernando Collor, president between 1990 and 1992, encouraged wearing the yellow shirt. It didn't work. Collor became the least popular president in history and was ousted for corruption. Bolsonaro's trick was to make the symbology of the great anti-corruption protests of 2014-2015 his own. Thousands of protesters, many dressed as canarinhos, paraded down São Paulo's Paulista avenue demanding the removal of then-president Dilma Rousseff, despite the fact that she had not committed any crime, and the imprisonment of Lula, the victim of a politicized judicial investigation.

Lula is aware of the danger. She has named former national team player Raí, the brother of Sócrates, the iconic Corinthians midfielder, who fought for democracy in the 1980s both in football and in society in general, in her transition team. The president-elect tweeted last week: "People should not be ashamed to wear the green and yellow shirt (...) You are going to see me with the shirt with only the number 13 (of the candidacy on the left) ”. Everything indicates that the match against Serbia will be the moment. “Lula is a leadership phenomenon,” says Ronaldo Helal. When he puts the shirt on, it can be a cathartic moment."