The MotoGP World Championship turns red hot after the crazy race at Motorland: Fabio Quartararo's leadership hangs in the balance with his fall after a contact with Marc Márquez, Enea Bastianini challenges his countryman Pecco Bagnaia frustrating his fifth victory in a row, and both the Beast and Aleix Espargaró, third, join the fight for the title. 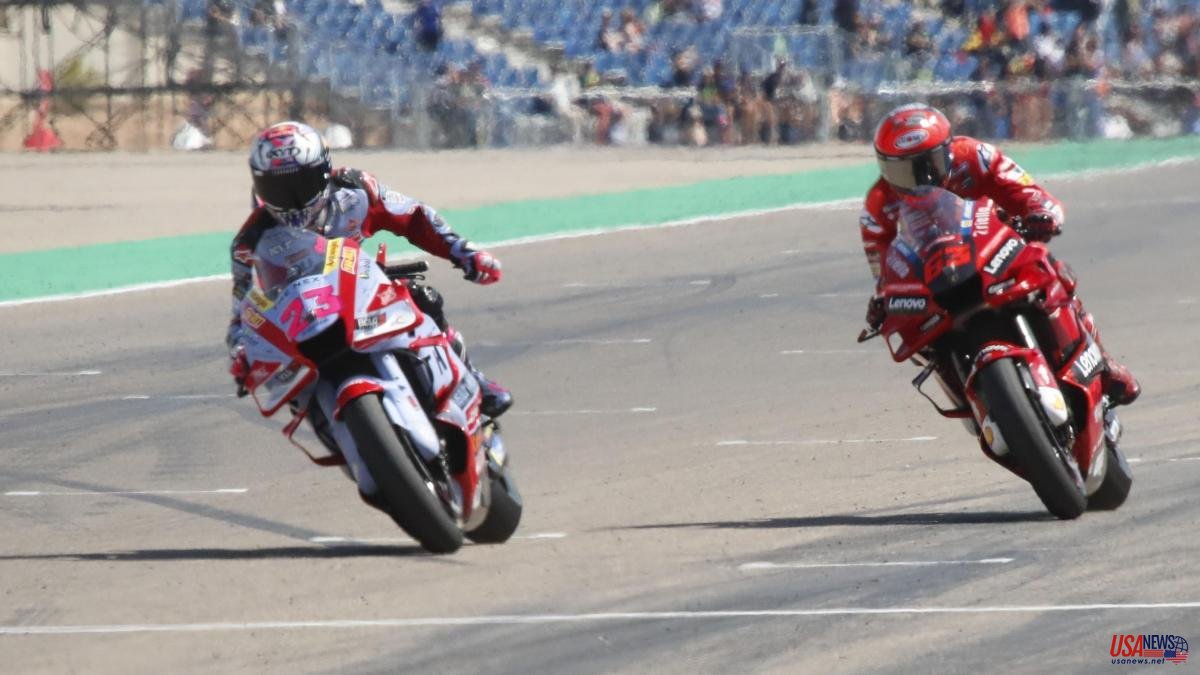 The MotoGP World Championship turns red hot after the crazy race at Motorland: Fabio Quartararo's leadership hangs in the balance with his fall after a contact with Marc Márquez, Enea Bastianini challenges his countryman Pecco Bagnaia frustrating his fifth victory in a row, and both the Beast and Aleix Espargaró, third, join the fight for the title. The top four are now separated by 48 points. And 93 was left without a happy return.

The start of the Aragon GP could not have been more eventful and damaging for two of the championship's own names in a catastrophic first lap: Fabio Quartararo, the MotoGP leader, went down in the third corner, and Marc Márquez, in his return to competition after more than three months off, he retired due to a breakdown after a contact with Takaaki Nakagami, the other victim of the mishap.

The race started with Bagnaia dominating from pole, escorted by Binder and the other two Ducati, Miller's and Bastianini's. Márquez made a brutal start, from 13th to 6th, but when he reached turn 3 he was hit from behind by Fabio Quartararo, who was going down.

As can be seen on the Frenchman's on-board camera, the Honda gave Marc a whiplash when braking. "I didn't want to make the move, but he skidded me, he was very close because he was preparing to overtake in the next corner," explained the man from Cervera, who received the impact of the Devil. The Frenchman lost control of the Yamaha, which went over him and scraped his chest.

Shortly after, Márquez's Honda was losing parts along the way. The Catalan came out on the outside in the corkscrew and when he joined the track he paired up with Nakagami. As explained by the 93, due to the contact with Fabio, the height adjustment system (holeshot) was blocked and also the brake rebound and he touched the Japanese, who went to the ground. The one from Cervera loaded the rear tire and had to retire.

“The start was good, I played the first corner on the outside. Everything started in turn 3, with the tire still cold, Bastianini and Aleix had a scare, me too, everyone braked a lot and there was an accordion effect. I had to cut gas and I had contact with Fabio, who was very close and did not have time to react, ”Márquez explained to the Dazn microphone.

Next, the man from Cervera noticed “something strange at turn 5”, he believes because “he had a piece of Fabio's fairing on the rear of the bike”. He kept going and at turn 7, going parallel with Nakagami, his holeshot and rear wheel got blocked. “The bike has thrown me to the left, due to an unlucky mechanical problem. I hope you are both well”, he lamented the damage.

So in the first lap, the leader dropped out, so Bagnaia had a great chance of getting closer to 5 points, and the reappeared Marc Márquez was left with no comeback, no option to ride kilometers and evolve in his recovery.

Without leader Quartararo in the race, Bagnaia felt strong at the head of the race, closely followed by Bastianini and Binder in third position.

However, on lap 9/23 Bastianini took the lead by overtaking Bagnaia with an inside, but the Beast went wide at turn 12 and the rider on the red Ducati retook the lead.

He kept it until the last lap, in which Bastianini made it clear that there were no orders from the Ducati team and went all out for victory. In turn 5, Enea ate Pecco, who could not react and settled for the 20 points of second place. The bite from him was equally huge: he trails Quartararo to just 10 points. He has shaved 81 off him in five races.

"I gave my best. On the last lap Enea had more traction, the whole weekend has been very competitive and I knew that he and Fabio were the fastest. On the last lap I didn't feel able to overtake Enea because I was assuming too many risks. 20 points is fine."

Aleix Espargaró achieved the podium, his sixth of the year, in a fantastic overtaking of Brad Binder with three laps to go. The one from Granollers is close to 17 points behind Quartararo's leadership.