Barcelona airport has an alternative proposal for its expansion

The debate on the expansion of the Barcelona airport is gaining strength again after being falsely closed just a year ago. 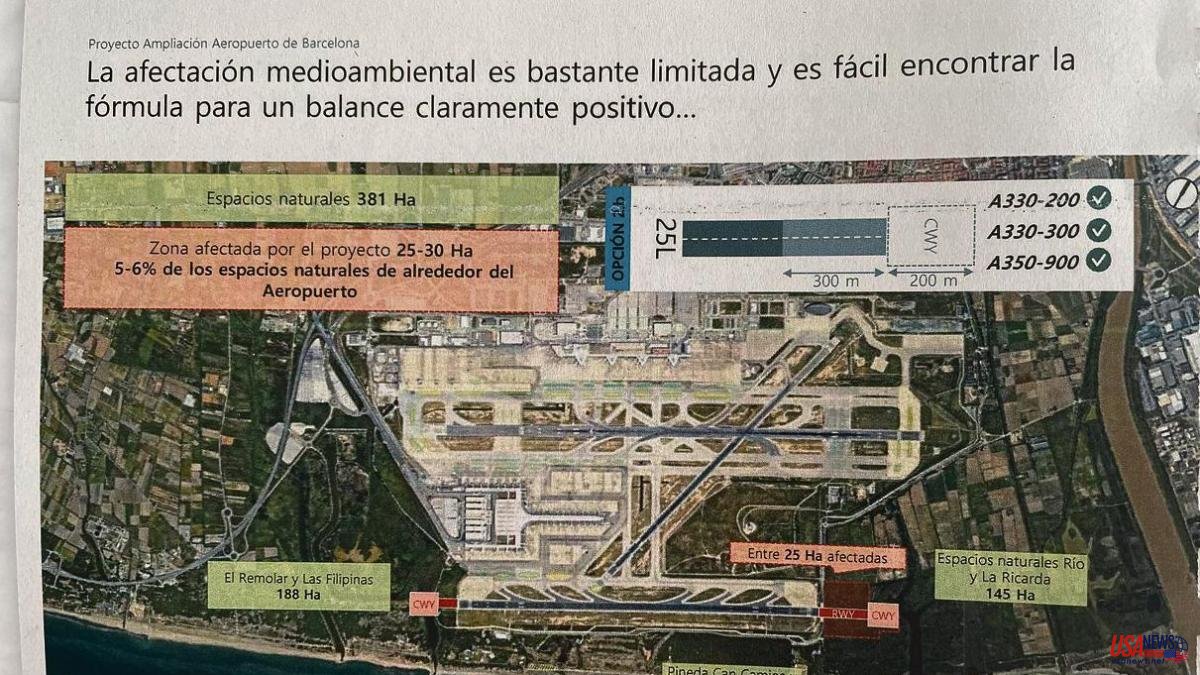 The debate on the expansion of the Barcelona airport is gaining strength again after being falsely closed just a year ago. Catalan civil society has activated a roadmap to facilitate an agreement and supporters of the extension –both members of entities, as well as businessmen and politicians– are studying alternatives to the initial project. This proposed lengthening the third runway 500 meters to the east, which would affect the Laguna de la Ricarda, a natural area of ​​private property protected in the Natura 2000 network. But the disagreement between the partners of the Govern and the opposition of the municipalities governed by common and Podemos, with Barcelona at the head, stopped the project.

Now new proposals are emerging that are being analyzed by economic and political circles. Among them, one has aroused special interest and is the focus of much of the talk about plans for the airport. This is a technical report from the consulting firm ALG that puts on the table another way to increase the length of the discordant runway, thus increasing the operational capacity of El Prat without disturbing the residents of the area with more noise, at the same time that minimizes the environmental impact, according to the document. The analysis, to which La Vanguardia has had access, proposes the following: instead of extending the third runway 500 meters to the east as Aena initially proposed, it suggests extending it 200 meters towards Ricarda and 100 meters towards Remolar, without affecting the lagoons . Here a signaling would be added on water surfaces to lengthen the take-off distance, but without paving, which in aviation is known as a clearway, says the report. "An option of 250/300 meters plus clearway could be an optimal compromise to minimize the impact on reserves and not compromise operations," the document underlines. In this way, the study continues, it would be possible to increase the capacity of the airport at rush hour, decongest the infrastructure and facilitate long-haul flights, with large aircraft that need a longer runway to take off and that now have more limitations. In addition, the use of the landing and take-off runways would be kept segregated to generate less noise in the adjoining municipalities. The report also considers that the impact on protected natural areas would be less than with the Aena plan.

As for the satellite terminal, the document stresses that it makes sense "if it goes hand in hand with more operations at peak times", that is, with a greater number of flights. "In Barcelona the bottleneck is the runways, not the terminals," he insists. With an extension of the third runway and more intercontinental flights, the ALG report proposes dedicating the T1 building to domestic and European flights, while the satellite terminal would accommodate passengers on long-haul flights. The possibility of doing nothing and leaving the airport as it is, concludes the analysis, "is the worst option" because, according to the consultant, Barcelona will continue to have "connectivity deficit with the most distant markets, which generate dynamism economic". "A lot of operations with large-fuselage aircraft will continue to take off from the dirt runway, which generates noise impact on the towns of Gavà, Viladecans and Castelldefels", while Ricarda and Remolar "will continue to be private and the degradation of some spaces will continue" .

However, any proposal to extend the airport should come from a committee formed by the Generalitat, the town councils involved, experts and external advisers that take into account both technical and environmental aspects, the report maintains. Not surprisingly, any extension that affects protected areas, whether 500 meters or 300, should have the approval of the European Commission. The environmental impact of the project, in the midst of a climatic emergency, will be analyzed exhaustively.

The ALG alternative for El Prat is the one that has generated the most interest among some of the supporters of the airport expansion, but it is far from the only one being studied these days. The Foment employers' association has launched its own commission in this regard, with a panel of members and experts that meets for the first time tomorrow and that will seek its own option for El Prat.

However, an eventual pact will not be quick. Those involved in the decision to extend the airport – from the central administration to local authorities – are aware that any political agreement, if it is reached, will have to wait for the municipal elections of 2023. The electoral contest could distort the negotiations , superimposing partisan interests on technical, environmental and economic criteria. Hence, JxCat and ERC remain silent for now about the airport and that the Comunes and Podemos have raised the flag of opposition to the expansion while they have barely raised their voices against the large extension of Barajas.