The day the city kicked off Christmas with the switching on of the lights, Barça joined the party with a hard-fought win over Bayern Munich (3-0) at a Camp Nou that once again became a talisman for those of Giráldez. 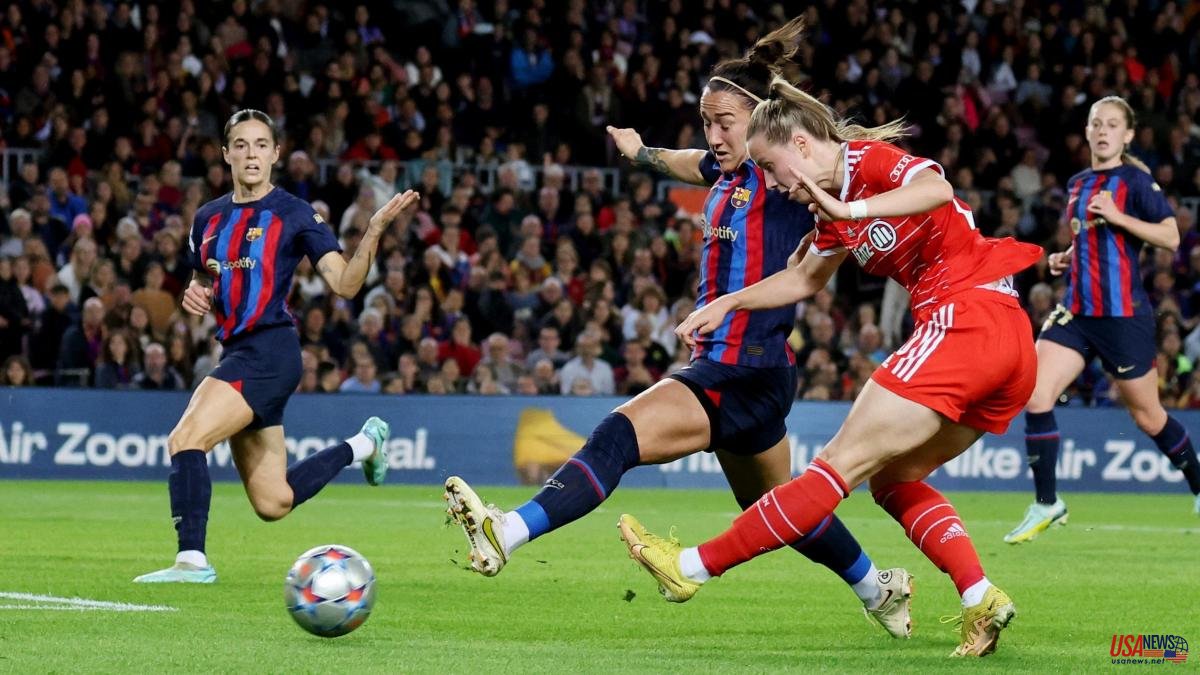 The day the city kicked off Christmas with the switching on of the lights, Barça joined the party with a hard-fought win over Bayern Munich (3-0) at a Camp Nou that once again became a talisman for those of Giráldez. The azulgranas turned around a gray first half with a win in the second half to consolidate their lead in the group.

The rain that threatened Barcelona in the previous hours did not dampen the spirits of a hobby that once again turned to the Catalans. The club had organized a real party with games, musical entertainment and a giant slide that delighted the fans.

The Camp Nou once again broke a record, this time for attendance at a group stage match. The 46,967 spectators who attended the match did not stop cheering at any time, creating a truly magical atmosphere even before the initial whistle, when Alexia Putellas appeared on the pitch to receive the trophy that accredited her as the best soccer player last year in the Champions.

Despite the great atmosphere, Barça started a bit cold. Slower than usual in his combinations, his football did not quite flow, although that did not prevent him from being the one who accumulated the most chances in the rival goal. Geyse warned after two minutes with a header that Grohs saved and also Aitana, the most active of the team, tested the reflexes of the goalkeeper of the German team on several occasions. The clearest, just before the break, with a cross shot that Gohs deflected with his fingertips.

Those of Alexander Straus, for their part, came out in overalls, aware of the effort that a field and a rival like this would require of them. A serious team was seen, who dared to challenge Barça for possession in the first minutes and who warned of how lethal it could be on the counter in any steal of the ball in the center of the field. The minutes passed and the tone of the match did not change, with the ghosts of the pre-season – when the Germans prevailed in a friendly in the only defeat of the course for the Catalans – hovering over the Camp Nou. Barça was not there, who starred in one of the first grayest parts of the season, more due to their own demerit than the rival's merit.

It seems that Giráldez's talk at the break had an effect and Barça came out plugged in. Geyse only needed a minute to unblock the team and score the 1 to 0. A header that bounced off the post and entered the Bayern goal like a carom. Three goals in three games for the Brazilian, who can already boast of having celebrated a goal at the Camp Nou.

When game time was up, Aitana Bonmatí rounded off her great game with the 2-0 draw, taking advantage of an excellent assist from Rolfö and adjusting the shot to the post, impossible for Grohs. The crowd went crazy and Barça was once again that recognizable lethal steamroller, monopolizing possession and having fun with the ball. Claudia Pina joined the party with a real great goal that sealed the Barca victory, ensuring solo leadership of the group, with two days to go. Victory worked, but achieved. Next stop, the Metropolitan, where Atlético awaits in the League (Sunday 4:30 p.m.).