A player who is no longer in the League, Isak –sold by Real Sociedad to Newcastle–, and three Madrid footballers: Benzema, Valverde and Rodrygo, the latter from a penalty. 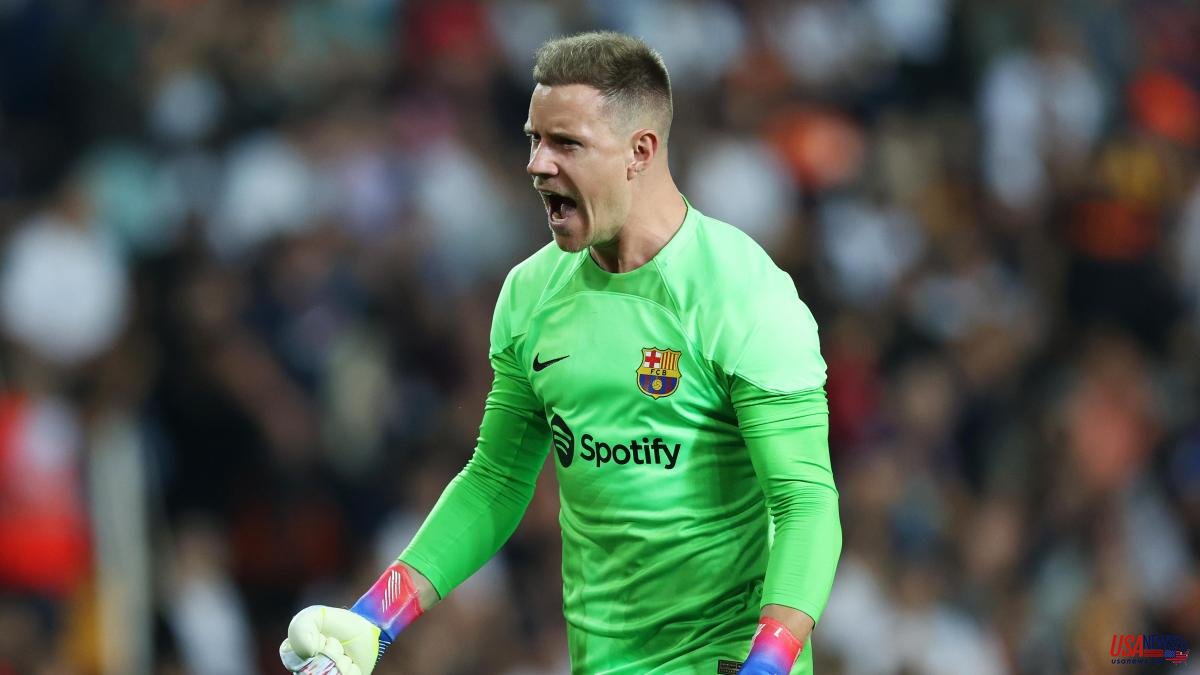 A player who is no longer in the League, Isak –sold by Real Sociedad to Newcastle–, and three Madrid footballers: Benzema, Valverde and Rodrygo, the latter from a penalty. They are the only ones who have been able to pierce Barça's defense, reach Ter Stegen and beat the German in the first 12 days of the championship.

The goalkeeper went 636 minutes without conceding a goal between Anoeta and the Bernabeu and now has another 270 clean sheets, since Rodrygo scored the final 3-1 in the classic with a penalty. At 30 years old and in his ninth campaign at the Camp Nou, Ter Stegen aspires to his first Zamora, a classification that he leads with 0.33 goals conceded per game.

The defensive security that Barcelona shows is making Lewandowski's goals shine even more. Saturday's was the third match that the Blaugrana won by the minimum with a 1-0. He did it in Mallorca, against Celta and repeated it against Valencia, a victory that leaves Barça just one point behind the lead.

Xavi has achieved something as complicated as the team not suffering from absences (many forced) and that the rearguard block does not crack, no matter who plays.

Surely, due to performance, characteristics and states of form, if Xavi had all the players available, his starting defense would be made up of Koundé, Araújo, Christensen and Balde. Two of them, the Uruguayan and the Danish, are now injured. But it is that the four have not yet coincided on the pitch.

Koundé and Christensen are new this season and they came to give calm, hierarchy and a good start from behind. For his part, Alejandro Balde has settled this year in the first team after barely playing 206 minutes last year. He is now close to a thousand, even playing with a leg changed to the right. Araújo, called to be one of the bosses, was indispensable until he was injured with his selection.

In the League, the Egarense coach has already used nine different defenses. He has only repeated two, in part because the injuries have hit the defenders. Sergi Roberto, Araújo and Christensen are in the infirmary while Bellerín and Koundé were unemployed. The scares follow one another without that making a dent in the framework that protects Ter Stegen.

Without going any further, Barcelona ended up playing at Mestalla with their fifth and sixth central defenders. With Eric Garcia injured in the first half and Koundé injured in the second half, Xavi had to resort first to Marcos Alonso and then to Piqué, who did not have his shin guards on, to end up playing (he had already passed against Celta at the start) with three full-backs lefties on the line of four.

The tests that the French and Martorell underwent yesterday indicate that neither broke. They are only overloads so the World Cup does not concern them. The idea is that they rest and do not travel to Pilsen today for the inconsequential Champions League match – Barça is already third and will go to the Europa League – and be ready and recovered to receive Almería and travel to Sadar, before going to Qatar.