Barça, Rosell, Bartomeu and Neymar, acquitted in the DIS Case

The court of the 6th section of the Provincial Court of Barcelona has acquitted this Tuesday all the defendants, including Neymar, Barça and the former Barcelona presidents Sandro Rosell and Josep Maria Bartomeu, of corruption between individuals and fraud, a crime of which they were being judged as a result of the lawsuit filed by the company DIS. 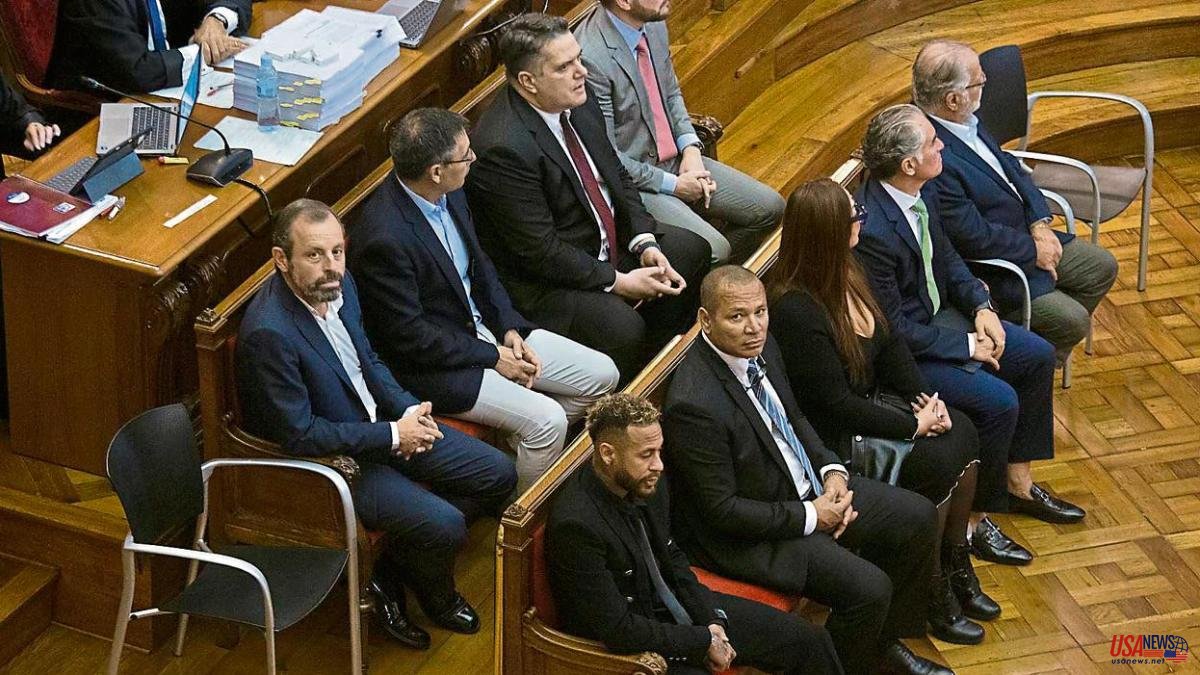 The court of the 6th section of the Provincial Court of Barcelona has acquitted this Tuesday all the defendants, including Neymar, Barça and the former Barcelona presidents Sandro Rosell and Josep Maria Bartomeu, of corruption between individuals and fraud, a crime of which they were being judged as a result of the lawsuit filed by the company DIS.

In addition to the former Barça leaders and the footballer, the courts have also released Neymar's parents, Santos, the consultancy N

The Brazilian company, which acquired 40% of the federative rights of the now PSG player on March 6, 2009 after the payment of five million reais to Santos, initially denounced that it should receive its corresponding percentage of the 40 million that Barça paid the striker as a transfer bonus in the summer of 2013, when he took over his services.

Barça signed the Brazilian after paying Santos 17 million, according to the ruling in the case, and gave the corresponding part to DIS, which received 6,840,000 euros. The São Paulo club ended up collecting another 7.9 million, a total of 21,171,000 euros, for a collaboration agreement on grassroots football with Barça, in addition to agreeing two free friendlies with the Barcelona fans, one of them the Joan Gamper Trophy from 2013.

"DIS is not the owner of the protected legal right. It is not a football club that enters into competition with other clubs for the hiring of professional players. Neither the rules nor the uses of FIFA are enough for it," says the private accusation. resolution of the court, which bases its judgment on article 286 bis of the Penal Code to assess the alleged corruption between individuals.

DIS defended that the negotiation between Barça and the consultancy N

The agreement reached by the player's parents with Rosell and Bartomeu, the club's president and vice-president at the time, was signed on November 15, 2011 in São Paulo and stipulated that Barça would advance 10 million of the 40 to ensure in the future the Neymar's rights, at that time a player especially valued by the great teams in Europe, including Real Madrid. Both parties, both the player and the Catalan club, also agreed to pay said amount as a penalty in case of breaching the pre-contract.

Despite the fact that the players cannot negotiate with other clubs if they are not in the last six months of their contract, Luis Álvaro de Oliveira, president of Santos at that time, authorized Neymar, by means of a private letter, to negotiate with Barça, which At first it also guaranteed the Brazilian a salary of 36 million in five years. In 2013, just before his arrival in Barcelona, ​​it was agreed to increase his salary to 45.9 million during the five years that he dressed as a Barça player. Neymar also received another transfer bonus of 8.5 million and 1.5 million for accepting the transfer of his rights.

Neymar, who abruptly ended his time at Barça in sporting terms in 2017, has been linked to the Barça club for almost a decade due to legal matters. First was the trial for a possible tax offense in his signing, settled with an agreement. Then the case that pitted the player against the club for the renewal bonus signed in 2016 was closed in favor of Barça. And finally the sentence for the DIS complaint has arrived, in principle the last chapter of the almost always stormy relationship between Neymar and Barca.