Barça overwhelms Viktoria with a handful of goals

The Camp Nou is already a party. 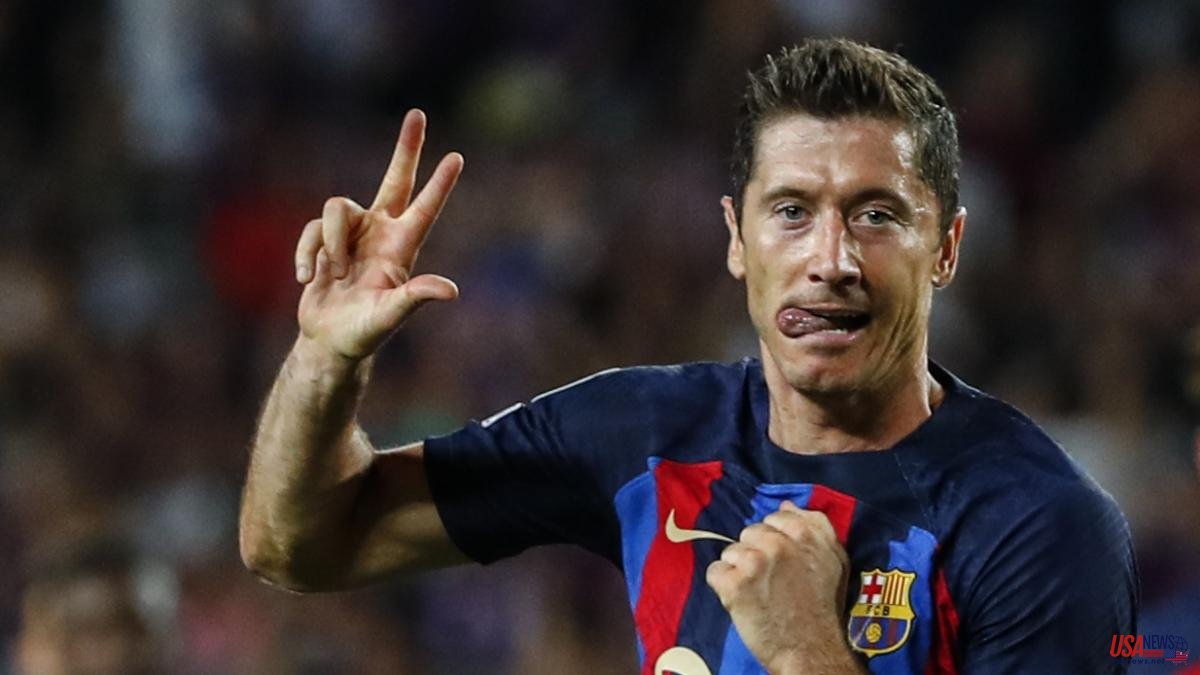 The Camp Nou is already a party. His Barça wins, convinces, scores, has fun and has fun. Xavi Hernández's team opened the Champions League with a victory full of ingredients, beauty and nuances. The fourth consecutive win of the season to feed faith in the project and to tell Europe that well, Viktoria was an ideal rival, but that this Barcelona is quite another from the timid last season. He will have to endorse it now in Munich and Milan but what is clear is that the Barcelona fans are pure dynamite because their arsenal is abundant and because they have a sidereal Lewandowski. The Pole's first triplet as a Barcelona player. That Haland and Mbappé put in two, because the Barcelona player signed three. His has been love at first sight and the fans cheer him on without ceasing. Honey on flakes for Barça and for his coach, who had other protagonists and it came out of fireworks.

The coach anticipated that he was going to practice rotations and he did not lie. On the contrary, he was surprised by the flow of changes. Up to six introduced. The coach gave rest to pillars such as Araújo, Busquets or Gavi and opted for Sergi Roberto, Jordi Alba, Frenkie de Jong, as a pivot, or Kessié, who was making his debut from the start. Although the great news of the line-up was the presence of Ansu Fati, ten months later in a start.

Stone had to be broken because the Czechs did not hide and they were equipped around their goalkeeper in concrete block format, but Barça entered willing to be persistent. The Blaugrana team constantly recovered and quickly looked for the right flank where Sergi Roberto interpreted the spaces very well and where Dembélé was at the origin of all the fantasies, the good ones with his feints and dribbles and the bad ones with some absurd lost ball. Things of the Frenchman who is now experiencing his best moment as a Barcelona player. His display was phenomenal.

On the left side Ansu Fati also tried to appear but he is more of a finisher than a distributor. He does not yet have the spark of his angelic appearances but he did have options to score. He left it for another day.

Because the person in charge of opening the result was a most unexpected protagonist. In the first corner thrown directly into the Barça area, Koundé, what a wonder, rose to prolong the ball to the other side, where Kessié headed it into the net. The first goal as a Blaugrana by a footballer with instinct and who does not complicate life with the ball.

The early goal only fueled the illusion of a dazzled Camp Nou. But that did not prevent a morrocotudo scare. The referee decreed a penalty from Christensen to Mosquera. If it was a maximum penalty, the play could also lead to the Dane's expulsion and the referee had already drawn the red one. But from the VAR they warned him that Mosquera had elbowed the center-back's face at the origin of the set. He went to see the monitor and had no doubts. Missing in attack.

Barça returned to the fray with the art and leadership of Pedri and with his association with Lewandowski. Both participated in the second of the night, after half an hour. The canary recovered, rogue, a ball, found Kessié and he found Sergi Roberto. The one from Reus connected with Lewandowski and it was daylight. The Pole maneuvered, feinted, aimed and nailed it with a tight shot. So easy and so hard.

Like when he assisted Pedri with his heel so that the kid could skirt the third. That had overtones of a festival but Viktoria closed the gap in an oversight by Christensen, who hesitated before a divided ball. Jemelka crossed to Sykora's head.

Fortunately for Xavi's men there was no time to complain and in the added time of the first act Dembélé put on the guerrilla outfit, fought for a ball, recovered it and assisted the second post with a perfect service to Lewandowski. The striker made it profitable with a shot from a chair plate.

The resumption brought with it the premiere of Piqué's season, taking over from Sergi Roberto. The central defender was received with applause in the midst of a flattering panorama. Because the party had only one owner. Viktoria picked up again and Barça controlled until the ball fell at the feet of Dembélé, in MotoGP format. But chances were no longer chained and Chory pardoned the second of the Czechs.

That action woke up Barcelona, ​​who pressed the accelerator again to turn the stadium into a party. The head of the exhibition, of course, Lewandowski with the third of his private account. Another millimeter shot. Everyone wanted to join the “momentum”. Even Ferran Torres, assistant in the Barça room and executor in the fifth, with a beautiful dance on his axis.

There was even time for the debut of the Cantabrian Pablo Torre, who was already eager to participate. A round night.