Barça opens 2023 with a victory against Sevilla

Barça started 2023 with a solid win (4-0) against Sevilla in a Johan Cruyff that once again put on a very good start in the first match of the year. 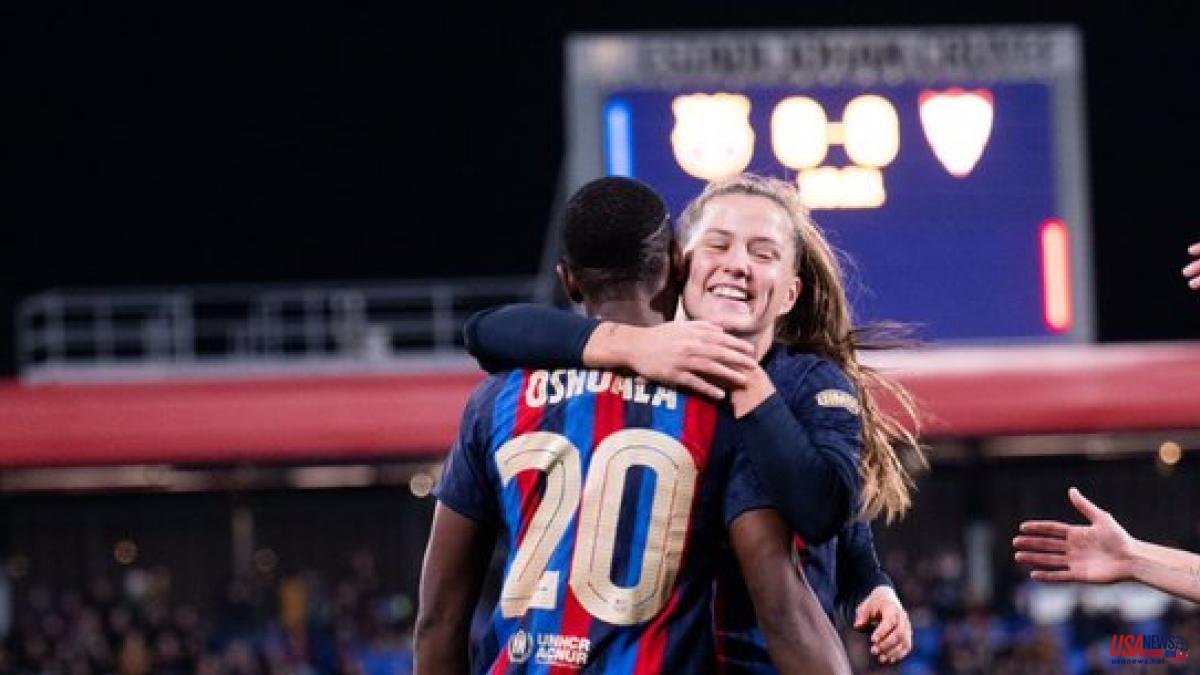 Barça started 2023 with a solid win (4-0) against Sevilla in a Johan Cruyff that once again put on a very good start in the first match of the year. Giráldez's team gave the Andalusians no options and monopolized possession and chances, recovering the best version of the Catalans, who ended the year with some doubts in their game and conceding the first defeat of the season against Bayern.

Despite not offering a great image in the last clashes, Barça finished the 2022 undefeated leader in the League, classified as first in the Champions League group and ready to debut in the Cup this Tuesday (8:45 p.m.) in El Sadar against Osasuna. Thinking about the KO competition, Giráldez reserved some of the starting footballers such as Aitana Bonmatí, but the team did not suffer and performed at a high level in a Johan Cruyff in which they have never lost since they released it back in 2019.

The first half had everything, goals, two balls crashed into the woodwork, a penalty not taken and another missed in a true recital for the blaugranas. The first to send a powerful shot to the post was Fridolina Rolfö. The Swede received a magnificent pass between the lines from Mariona Caldentey and she didn't think twice before shooting. Without time for Sevilla's reaction, the goal would arrive, from the boots of Asisat Oshoala. The Nigerian scored Barça's first goal in 2023, number 300 in the Jonatan Giráldez era at the head of the Barça bench.

The chances continued to rain in the goal of an Esther Sullastres who avoided greater evils with a serious performance. Especially active were Oshoala, who had a one-on-one match against the goalkeeper and sent a shot to the post; and Claudi Pina. The young Barça striker had a dangerous double opportunity in her boots that she wasted. The first shot was deflected by the defense and on rebound, the Montcada player tried her luck again with a shot that went over the crossbar.

The forward was the protagonist again shortly after with a penalty that was not awarded to her, but she made up for it by responding with what she is best at: scoring goals. His was 2-0 in minute 34 after a beautiful combination with the other protagonist of the match, Oshoala. Already in the last bars of the first half, some hands from Eva Llamas in a jumbled play inside the small area cost them a penalty against Sevilla. Claudia Pina was in charge of launching and wanted to adjust it so much that he ran into the wood and shot out of the field.

Barça lost a bit of spark in the early stages of the second half, but Giráldez moved the bench and the fresh players revitalized the Barça attack. This is how the third would arrive, the work of a newcomer to the field of play Salma Paralluelo, who hit the squad with everything tight, impossible for Sullastres.

Also Torrejón, who had entered the second half, was about to widen the gap in a shot that managed to save the goalkeeper of the Andalusian team.

The only negative note in the match was Ingrid Engen's muscle injury. The Norwegian footballer had to leave the game a few minutes after coming on, leaving the team outnumbered for the last ten minutes of the game because Giráldez had already exhausted all the changes. Despite this, Paralluelo would still have time to score the fourth and final.

A great triumph to start a promising year in which they aspire to recover the European throne that they lost last year in Turin against Lyon. Before that, an intense January awaits him that will start with the round of 16 tie for the Cup on Tuesday at El Sadar (8:45 p.m., Teledeporte). Then the Super Cup will come in Mérida with a classic in the semifinals (Thursday 19, 7pm) and the possible final on Sunday 22 (12pm). They will close the month with the weekly game (January 25, 9pm) against Levante Las Planas and the visit to Granadilla de Tenerife (January 29, 6pm).