Win on the fast track based on competitiveness, cold blood, lucidity and legs. 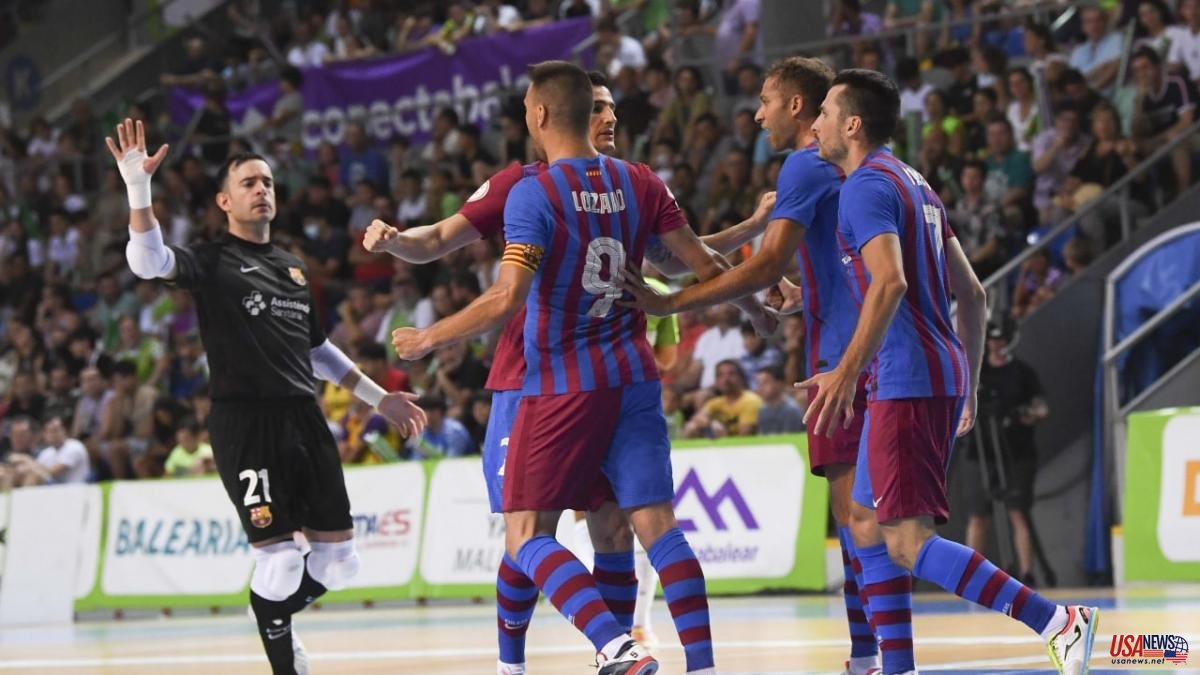 Win on the fast track based on competitiveness, cold blood, lucidity and legs. With this recipe, Barça futsal managed to lift the sixth League in its history yesterday in Son Moix with a brace from Sergio Lozano and goals from Pito and Dyego. With the domestic championship, the Blaugrana complete the series of titles this season after having already won the Super Cup, the Spanish Cup and the coveted Champions League. Only the Copa del Rey has resisted Jesús Velasco's pupils.

After having won the first game at the Palau, the Blaugrana ran into more than palpable tension on the Palma Futsal court, which hung up the sold out sign with 4,000 spectators cheering on the locals. And already in the first part, Barça had to come back twice through a brace by the incombustible captain Sergio Lozano. There is nothing and no one who can with his momentum. Not even a blow to his left knee, his big Achilles heel, which forced him to leave the track during the first 15 minutes. It was the time it took for the rival to get ahead with a goal from Higor.

It happens that Palma Futsal feeds on the losses of its rivals. The Balearic team's coach, Antonio Vadillo, took advantage of the first time out to remind his team of his strengths. "We have to recover more," he told him after seeing how Dídac saved a shot from Higor under the sticks after a loss by Esquerdinha in the defensive zone.

His advice worked. Chaguinha recovered a ball to assist Higor, who this time did not spare and beat Dídac. Son Moix went crazy with the 1-0. But then Barça captain Sergio Lozano left the bench to come to the rescue by scoring on a rebound.

The party rose in revolutions. That's what the script required. A great individual play by Nunes, who left Lozano's mark behind, surprised Dídac, beaten with a low shot that slipped between his legs. It was 2-1. Furious at his mistake, Lozano returned to the fray, chasing a cross from Dyego to tie the game again.

In the second half everything happened. From a powerful shot by Nunes that went slightly wide of the Barça goal to a spectacular stretch by Dídac, who stopped a shot by Eloy Rojas. The tie did not serve Barça. Yes to Palma, eager to return the tie to Barcelona. They defeated the desire of the Blaugrana through a goal from Pito that fell like a bucket of cold water on the Balearic Islands. With 12 seconds remaining, Adolfo recovered a ball and connected with Dyego who finished off the sixth Blaugrana League. Lozano celebrated it visibly excited. "You don't know how happy I am. Everything has happened to us but here we are", said the captain who handed over the bracelet to Leandro Esquerdinha, so that he would lift the league cup and who bids farewell in the best possible way to his time as a player from Barca. "I take a lot of people from this club," he said excitedly. The image of a goodbye that will always accompany you.