Barça continues to pick up cruising speed in the Champions League and already leads Group B alone. 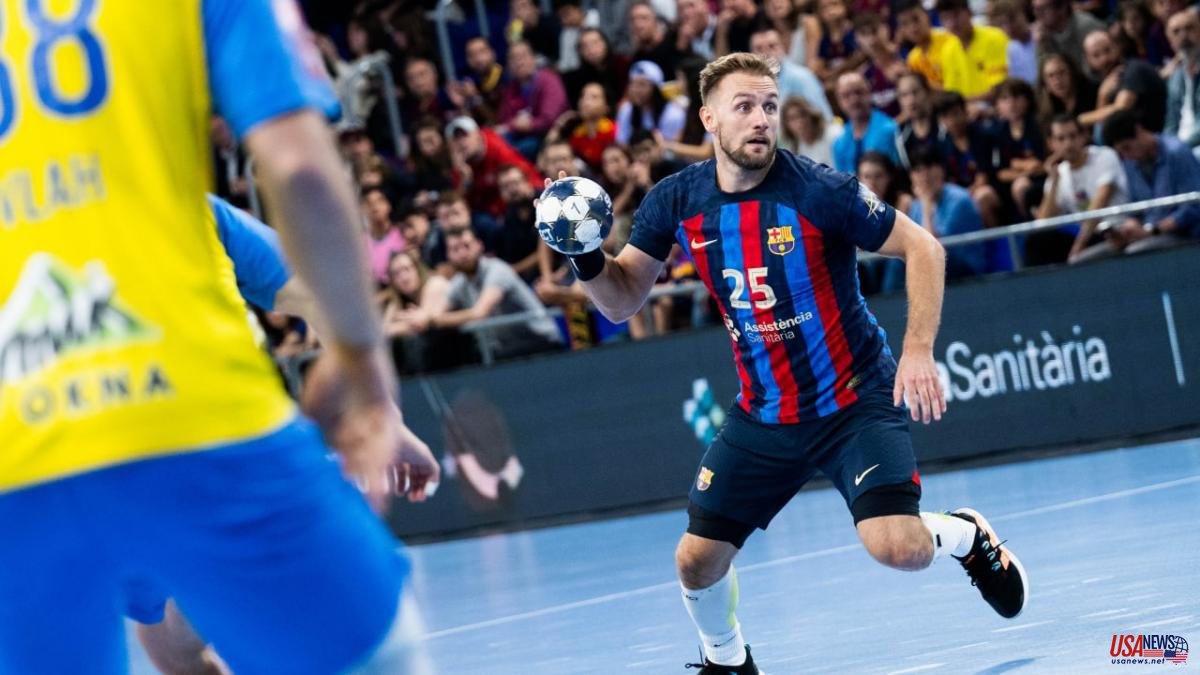 Barça continues to pick up cruising speed in the Champions League and already leads Group B alone. Their victory over the Slovenian RK Celje by 38-30, combined with the defeat of Aalborg at home against Kielce (28-30), leave them alone those of Carlos Ortega at the head of the classification, consumed only three days. The champion begins to mark territory, although he had to suffer more than the marker indicates.

Celje, the very young Slovenian champion, arrived at the Palau in sheep's clothing, but with the clearly visible jaws of the incipient wolf that the previous day ate nothing less than Kiel (38-36) with a festival of its star, Alex Vlah (10 goals). Barça was warned, which came out in a rush and made a 9-4 start crowned with a goal from Fàbregas on the counterattack. Five income goals that gave confidence to the team, and that warmed up the Blaugrana temple.

The ancient Palau has improved in scenery, with a set of lights in the presentations, and especially with the return of the Dracs supporters club to handball after more than a decade of absence. The animation of the group and the acoustics of the venue do the rest for the Palau to become a party as soon as the team starts to plug them in.

However, far from transforming the duel into a festival as that 5 at 9 minutes foreshadowed, Barça fell into a patch of irregularity. The defense did not close well and conceded a 1-3 draw that approached a Celje that was growing thanks to the player Vlah; a prodigy of speed and impudence in the one on one that with six goals in the first half came to adjust the score by 15-13, at 24:10, the minimum Blaugrana advantage.

Ortega had to pull fresh troops, with the entry of Aleix Gómez and the return of Mem after his exclusion and replacement by Richardson. Barça saw the ears of the Slovenian wolf and resorted to its emblematic speed to recover the rent of tranquility with Wanne's 19-14 that closed a 4-1 run. Although Vlah, plugged into a unique showcase, closed the gap before the break (19-15), and Pérez de Vargas still stopped him one on one at the buzzer.

Going through the changing rooms could not have made Barça feel worse. Without any defensive consistency, they conceded a resounding 4-7 in 9 minutes that forced Ortega to request time-out: the 23-22 score did not bode well. And less with 23-23 in Mlakar, Celje's first tie at 39m37s. The Blaugrana team needed a reaction, so Ortega brought in Nielsen in the goal looking for a shock and Langaro on the left side. The Palau understood that the match was getting complicated and turned on the boiler again.

Ivankovic's 24-25 at 41m57s, culminating a 3-9 run, put fear in the body of the Blaugrana parish. Barça needed heroes. Then Mem and Saint Emil Nielsen appeared – saving a penalty to avoid 25-26 – to start the resurgence. In addition, the defense 6:0 advanced at 9 meters with Carlsbogard, Frade and Petrus drowned the Slovenians' shot.

With a furious 5-0 run, thanks to the prodigious wardrobe (with Carlsbogard, Wanne or Langaro taking over), Barça regained control of the game in a rush of rage. The more he ran, the better he did. As he has always done, when he has done better.

It was with Langaro's 34-28 with 5 minutes remaining when the Palau Blaugrana and Ortega breathed easy. The Brazilian winger was very inspired in the final stretch to provide calm and Nielsen closed the blind with his 5 saves. Barça showed why they are the champion.