Assen Cathedral lived up to its name and gave a majestic race that compresses a World Cup that seemed almost decided in Germany. 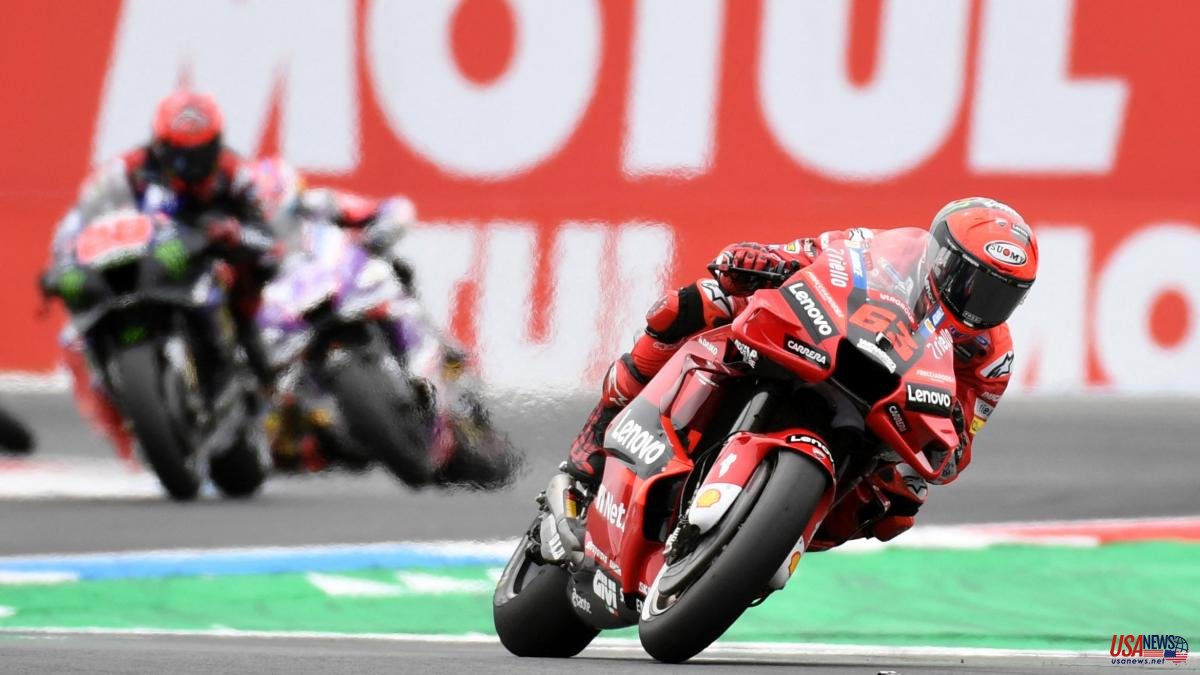 Assen Cathedral lived up to its name and gave a majestic race that compresses a World Cup that seemed almost decided in Germany. Pecco Bagnaia won with authority from pole, the leader Fabio Quartararo crashed, Maverick Viñales returned to the podium, and Aleix Espargaró provided the heroism of the day with a comeback from 15th to 4th, with brutal overtaking, after having been rammed by the French. The championship goes on vacation until August 7 (Great Britain) even hotter.

Assen's departure was electric. Bagnaia held on to pole to get off to a rocket start, Quartararo tried to attack at Turn 1 but ran too wide and was passed by Martín and Aleix Espargaró. The Frenchman regained their position in five corners, but Aleix, very strong, took him out of the way to return to second place, chasing down Bagnaia, who closed the first lap 7 tenths ahead of the Aprilia.

Aleix was going really strong, looking for his big day. He repelled Bagnaia a few tenths, had him within range on the third lap, and distanced himself from Quartararo, who, in turn, moved away from fourth, Bezzecchi almost a second behind. This is how the trio rolled with their heads stretched out, but close enough to hit each other.

However, very soon, on the fifth lap, the script was blown up with an unexpected crash by Quartararo and Aleix Espargaró. The Frenchman, when he was tracing turn 5, lost the grip of the Yamaha and took the Catalan ahead when trying to take the inside very past laps.

The two fell to the ground. The Aprilia rider was able to resume the race, well behind, in 15th position, and Quartararo did so in last place. The action would be reviewed by the stewards at the end of the race, so the possible sanction would be applied at the next British GP.

The biggest beneficiary of the incident was a Bagnaia who was escaping 1.1 seconds behind Bezzechi and Martín, third. Fourth was Brad Binder and fifth was Maverick Viñales, who overtook the South African to go after his first podium with Aprilia (lap 11/26).

Aleix Espargaró began the comeback attempt. He overtook Àlex Márquez, Rins and Di Giannantonio to reach 12th position. Each position that he won were points that he cut from Quartararo, who got into the box due to technical problems on the bike due to the crash. Although from Yamaha they told him to return to the track due to the possibility of rain and he resumed the race in last position, but with no chance of scoring if there was not a radical change if the water came.

It didn't even last two laps on the track. The Frenchman crashed again on lap 13, again at turn 5. The Yamaha spat at his ears and Fabio hit the asphalt hard, getting up in pain. This time he did withdraw.

Meanwhile, Aleix Espargaró continued to progress. He gained another position with the penalty of 'Long lap' to Nakagami, already placing 10th. In one fell swoop he rose two more places, to 8th, after eating Zarco and Mir. But just at that moment, lap 17, the track marshals warned with the flags of the presence of water. The race was animated with only 10 laps to go.

Before the announced storm, Viñales reached the third box of the podium that Martín had. Aleix Espargaró was 7th, overtaking Oliveira, and had cut Bagnaia by two seconds, who was 6 seconds behind, although the Italian was leading strongly over Bezzecchi. The Catalan climbed very plugged in, with ambitions for a podium. But he was far from her.

The rain did not make an appearance in the final 5 laps and the race was spared chaos. But Aleix unleashed his storm: he took advantage of the last laps to overtake Martín and win 6th place, on the last lap he pressed to reach Binder's 5th, caught up with him and ended up even overtaking Miller to win two places of a stroke at the chicane. His feat had taken him from 15th to fourth. He cut Quartararo by 13 points and approaches the Frenchman at 21 overall. Majestic Granollers, in one of his best races.

At the end of the race, Quartararo went to visit Aleix Espargaró to apologize. "If he had seen you, he would have lifted the bike", the Frenchman excused himself, very sporty, and hurt for having knocked down his rival for the title, and for adding his first zero of the year. "I rushed, I made a rookie mistake, I attacked as if it were the last corner. A race to forget," admitted the leader.

For Aleix Espargaró, "it was a very tough race. At first I was very angry. But I saw that he had the best bike. I didn't see the boards or anything. Today was a good match point, I didn't win, but I cut him 13 points, I'm very happy", said the Catalan.