Pecco Bagnaia is determined to become the cheerleader of the MotoGP World Championship, as he did last year squeezing Fabio Quartararo. 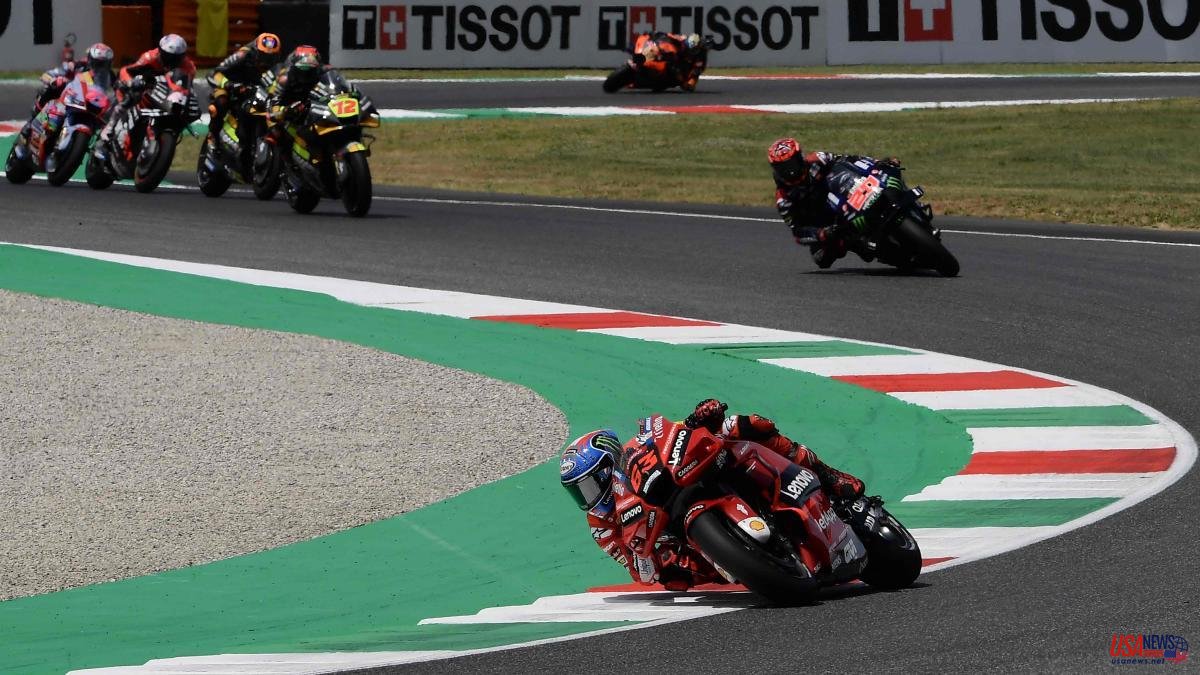 Pecco Bagnaia is determined to become the cheerleader of the MotoGP World Championship, as he did last year squeezing Fabio Quartararo. The Italian prevailed in Mugello, his second victory of the course, making evident the superiority of the Ducati on the Tuscan track, and is already knocking on the door of the fight for the title. Pecco is already 4th in the championship, 41 points behind the French Yamaha leader.

With the Ducatis dominating the front row, with two rookies in the first two positions –Di Giannantonio and Bezzecchi-, the start was crazy, nervous. Miller went through the grass, Bezzecchi slipped in and lost two positions, Aleix Espargaró moved up to 5th and Quartararo to 4th, and poleman Di Giannantonio gave up the privileged position. Marc Márquez, in his last race before surgery on his right humerus next week, moved up to 10th.

The first stages of the race were controlled by the two drivers of Valentino Rossi's VR46 team, Bezzecchi and Marini. Although they soon had a visit from Quartararo, who on the fourth lap was second. A very good performance from the Frenchman, as the Yamaha lacks a good top speed.

The next to appear ahead was Pecco Bagnaia, the official Ducati, who went from 5th to second after a best race lap and a new track record. The Italian struck down in San Donato, on lap 6, Marini and Quartararo, who remained on the podium.

Pol Espargaró suffered a hard crash at turn 9, the very fast Arrabbiata-2, and destroyed the Honda. It happened on the fifth lap, when he was fighting to get into the points with Jorge Martín. Álex Rins also crashed, his second consecutive fall when he was 14th.

Jorge Martín, who was running behind, 14th, set a historic milestone: he set his Ducati at 363.6 km/h, a new absolute top speed record in MotoGP.

Bagnaia was on fire and took the lead on lap nine, knocking Bezzecchi out of the way at the first corner. He did not want Quartararo to let the Italian escape him and he pressed to get second ahead of Marini. Although the Ducati rider turned the screw at his pace and opened a substantial gap of 1.1 seconds over the Frenchman with 12 laps to go, half a race.

Behind the two Ducatis of Marini and Bezzecchi, Aleix Espargaró, 5th, and a rising Bastianini, 6th, who were chasing glory in their home Grand Prix, were looking to climb positions. The one from Rimini, third in the World Championship after winning three races, however, crashed on lap 14 when he pressed. A favor to the leader Quartararo and Aleix, who would continue second in the championship.

A position that finished off the man from Granollers with third place in Mugello, conquered by overtaking Bezzecchi on lap 17. It is the fifth podium for the Catalan, the fourth in a row; an unusual performance for Aleix and for Aprilia.

In the last six laps, Quartararo tightened the screws on Bagnaia, approaching 7 tenths. But the Frenchman did not take risks to seek victory, he slowed down in the last four laps and was content with second place, which strengthens him in the lead with 4 more points over Aleix, now 8 behind the Frenchman. Both the Aprilia and Yamaha riders are the only riders to have scored points in every race.

In his last race before undergoing surgery, Marc Márquez signed a good 10th place, 10 seconds behind the winner, and gained two positions on the starting grid. The one from Cervera says goodbye to the World Cup being 9th in the championship.