The Madrid president has opened the political week in Barcelona, ​​where this morning she has starred in the Tribuna Catalunya cycle of the New Economy Forum, and has charged against the recent economic measures of the central government. 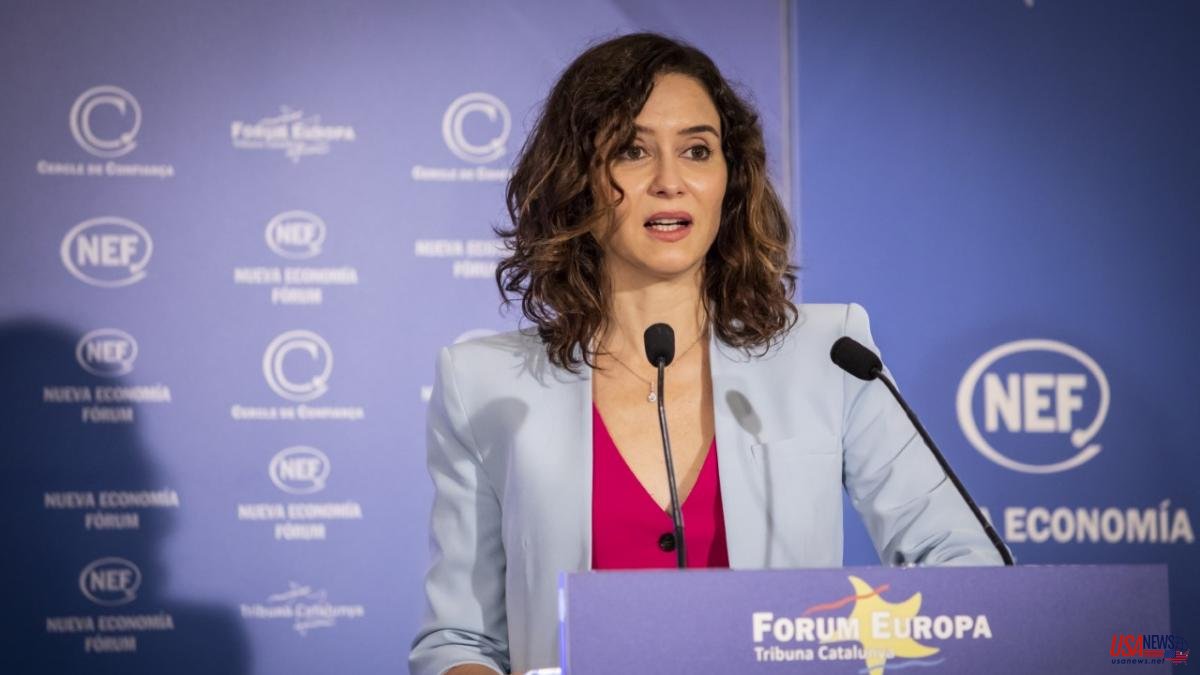 The Madrid president has opened the political week in Barcelona, ​​where this morning she has starred in the Tribuna Catalunya cycle of the New Economy Forum, and has charged against the recent economic measures of the central government. Isabel Díaz Ayuso has questioned the "euphemisms" with which, in her opinion, the Executive of Pedro Sánchez intends to impose his "authoritarian project".

For the Madrid president, Moncloa has started a "marketing campaign", and has exemplified it with the documentary on the daily life of the Prime Minister, so that Sánchez can remain in power, "regardless of coexistence or the future of the citizen". In contrast, Ayuso believes that there is not a "tax war" between communities, but rather against "the massive tax that Sánchez imposes." Although she considers herself a "firm advocate of paying taxes," Ayuso has warned that when they "are confiscatory, they kill the desire” and “turn everything into a hell of problems”.

In his conference at the Palace hotel and before an outstanding representation of the Catalan political and business world, Ayuso expressed his wish that Madrid and Barcelona collaborate from their shared "Hispanic" while referring to the fifth anniversary of 1-O and to the King's speech on October 3, 2017, of whom he has praised his defense of democracy and the Constitution. "That's not the case," exclaimed the president of the Community in relation to the "harassment" to which, in her opinion, the independence movement has subjected Catalan society as a whole.

For the president of the Community of Madrid, independence has caused an "economic fracture" and "irreparable damage" to the Catalan economy. "The independence movement business fails over and over again", said Ayuso, who considers that, "seen in perspective", Mariano Rajoy should have applied a "firmer and more durable" 155 when he had to manage, with "great difficulty" for the "unusual" of the situation, the high point of the procés as president of the Spanish Government. "It has been shown that it was done for a short time and that an illusion was created in many Catalan citizens who were tired of being underestimated and set aside and then quickly leading to elections," she argued.

The entire staff of the Catalan PP, with its president, Alejandro Fernández, at the head, has accompanied the Madrid leader in the Barcelona meeting in which Ayuso has also asked to "stop the process of carcoma" of the institutions that Spain suffers and of which he accuses the central government, which he holds alone responsible for the paralysis of the judiciary. "Nervousness leads the Government of Sánchez to insult, especially the leader of the opposition, because he knows that he is cornered", he has sentenced to, immediately afterwards, congratulate himself that Andalusia follows the path opened by Madrid in fiscal matters.

In his presentation, Miguel Garrido, the president of the confederation of Madrid businessmen, has defined Ayuso with one word, "freedom", and has praised his management of the Madrid economy during the hardest stage of the pandemic, in which the President of the Community tried at all times, as the businessman recalled, to keep the pulse of commercial activity despite the confinements and restrictions.

Ayuso has criticized the solidarity tax "invented" by the Government and, after acknowledging that Spain is a "plural, diverse nation made of contrasts", has reiterated that the autonomous communities must have room to establish their own fiscal criteria. "There are different governments that demonstrate with facts that things can be done in another way," said the Madrid president. "Never have so few taxes been paid and we have never had so many toilets and so many teachers in the Community," she has defended herself.

"Raising taxes is expelling", underlined the Madrid leader, who has defended that if there are no taxes of their own in Madrid, it is normal for businessmen to prefer to settle there and not in Catalonia, which has created 16 regional taxes, for which she has called get out of this "decadent and impoverishing spiral". "The economy is a state of mind", he recalled, and for this reason, in his opinion, what the administration should do is "provide facilities and not feed a Manichaean class struggle that seeks external enemies", in reference to the new economic measures of the left-wing government, focused, according to Moncloa, on mitigating the crisis in working families.

In this sense, Ayuso has announced that "Sánchez has fulfilled his days" and has censored his "attacks on the opposition leader to end up copying his proposals". "We are leaders in unemployment and in fiscal cannibalism," denounced the Madrid president, who recalled, after the last elections in Italy, in which the extreme right-wing candidate prevailed, that "the left is failing throughout the continent".