Ayuso accuses Sánchez of "buying votes for 17 euros a month"

Isabel Díaz Ayuso has been rigorous in her press conference to take stock of the year 2022 and, once she has taken the floor, the president of the Community of Madrid barely took 25 seconds to confront Pedro Sánchez, which perfectly sums up the confrontation constant that from the regional headquarters of Sol has maintained with the leader of the Executive. 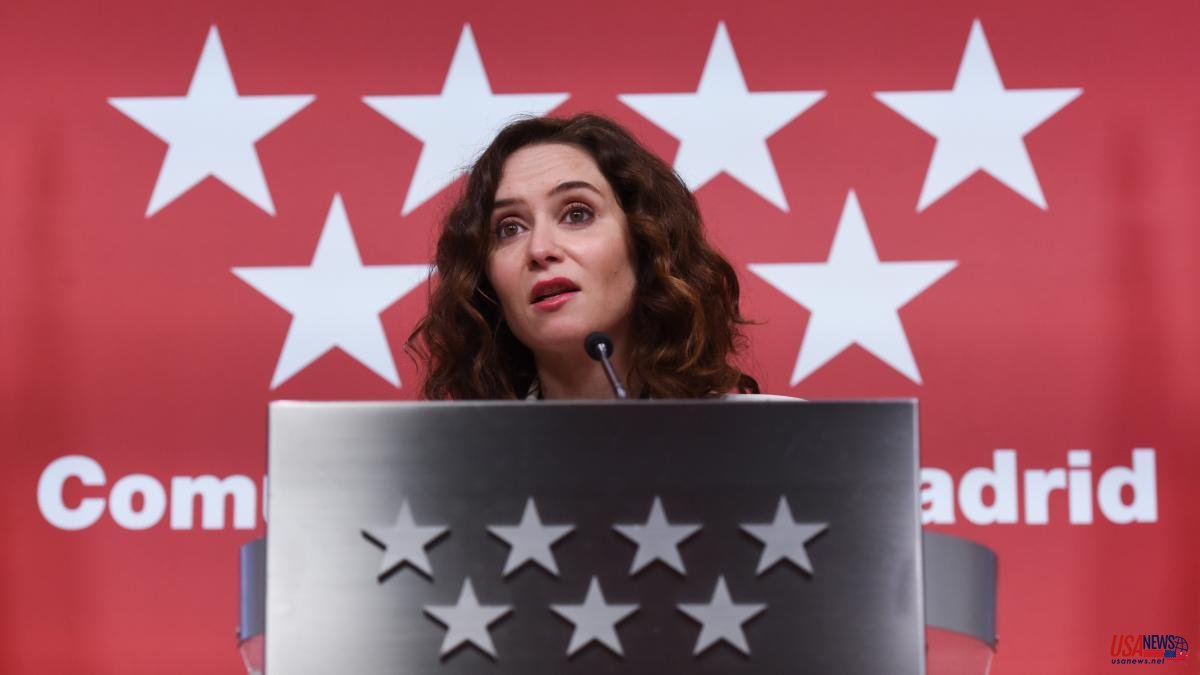 Isabel Díaz Ayuso has been rigorous in her press conference to take stock of the year 2022 and, once she has taken the floor, the president of the Community of Madrid barely took 25 seconds to confront Pedro Sánchez, which perfectly sums up the confrontation constant that from the regional headquarters of Sol has maintained with the leader of the Executive.

The Madrid leader has defended that her government "complies" with the people of Madrid and that it has managed the region "well" in the face of the "authoritarianism of the government that has not hesitated to punish the region" and that it launches "foolish deception" measures. In this sense, Ayuso assures that its good management is verified "in the vitality of the streets of Madrid, in its cultural, business and tourist life" and has remarked that they have not stopped fighting "for the life model of freedom". against the position of the central Executive and a Madrid left that "has not come out in defense of the interests" of the citizens.

During his speech at the press conference after the Governing Council, Ayuso made ugly the latest anti-crisis plan deployed yesterday by the central executive, scolding that "it is not about giving checks to people because they are women or young people, but that they have incentives and can earn it by themselves", because "giving money without any incentive numbs the system" and in the future "we will have more dependent people.

To finish off his dart, Ayuso has boasted that in the Community of Madrid "that each one directs his life" is encouraged.

In this sense, and denying to enter into a contradiction for criticizing the aid from the central government, Ayuso has been proud of "the defense of life" that is carried out in the Community of Madrid by positively assessing the aid of 500 euros per baby to the mothers under 30 years of age, from which 5,500 women have already benefited.

The Governing Council chaired today by Ayuso has also served to initiate the extension of the regional budgets that will have to be carried out as of January 1 after the divorce of PP and Vox in the Madrid Assembly.

The Madrid leader has criticized the "insane" attitude that Vox adopted when knocking down the regional Budgets for 2023 and has blamed them for the fact that "even the worst partners" of the Prime Minister, Pedro Sánchez, have lived up to their commitments.

In his opinion, "as soon as there is normality, Vox disappears" and he does not understand that if things "are going well in Madrid" why they have acted in this way. The president has branded her rejection of the Budgets as "insane", even more so with the "direct attacks" that Madrid is receiving from the central government.

"I think that even Sánchez's worst partners have lived up to their own commitments (...) The people with whom he had to agree on the Budgets have not been as up-to-date as those who agreed with Mr. Sánchez", he has influenced.

Thus, he regretted that millions of euros are going to be lost in "reducing waiting lists, aid for large families, Primary Care, dining room grants, early care or for day centers and nursing homes." All this, he has remarked, due to the "abandonment of Vox" that has left all these measures "in the dark".