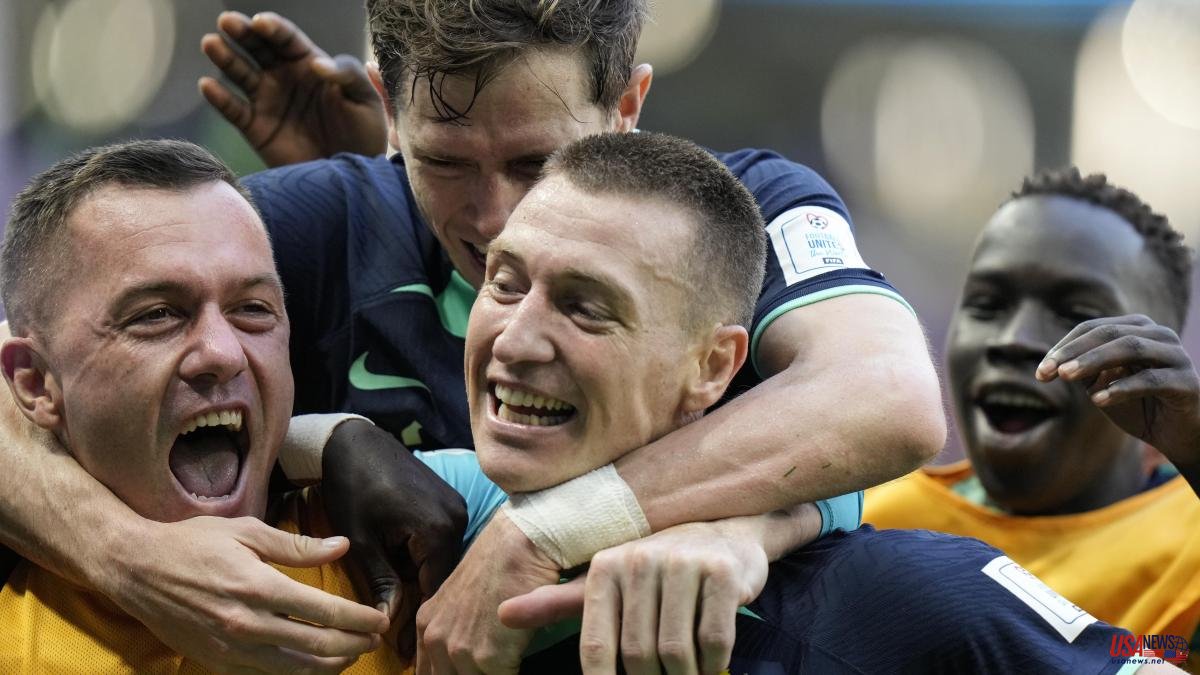 The World Cup always holds unpredictable stories starring on many occasions by unexpected or simply unknown heroes. These not only appear on big stages, like the Saudis against Argentina or the Japanese against Germany. Also in games with little appeal such as a Tunisia-Australia played on a Saturday morning, only suitable for fans who want football in the vein.

In a country without much of a tradition for the king of sports, the most devoted Australians who sacrificed their Saturday night on the island can take their decision for granted. Mitchell Duke, a striker who plays in Japan's second division, gave them their first World Cup win twelve years later thanks to a beautiful header with his back to the Tunisian goal (0-1). Something that helps the socceroo team to re-engage in the World Cup and leaves open a group in which a priori France and Denmark should not give rise to surprises. Like the Tunisians, they will at least keep hope alive until the third matchday.

The match between Tunisia and Australia was one of the least attractive in the group stage. Without any footballing relationship beyond the precedent in the 2005 Confederations Cup, the important thing for both at the Al Janoub stadium in Doha was to score the three points against today's opponent, the weakest in the group for both. They were taken by the team that deserved it the most. Australia played a round match in all facets, generating danger in the first half and knowing how to suffer when the Tunisians attacked.

If anyone still had any doubt that Tunisia has the support of the stands as one of the four Arab countries in Qatar, it was cleared at the kick-off; whistles to the Australians with the ball, chants of 'olé' after 20 seconds when the 'Águilas de Cartago' chained the first passes… With the tie achieved against Denmark leaving a good image, the setting was ideal for those from Jalel Kadri will try to reach the last day against France with four points and thus aspire to a historic first place in the next round.

The intensity was evident from the start, with Aïssa Laïdouni once again as the standard bearer. The first defensive action of the team's soul in the fifth minute was already celebrated as almost a goal, encouraging the public as he already did against Eriksen and the rest of the Danes. That passion and struggle can sometimes be confused with an excess of revolutions that clouds the mind when creating. This is what happened to Tunisia.

A thoughtful Australia took it much more calmly. Graham Arnold knew that, unlike the day against the world champion -they fell 4-1 but played well at the start-, they had to propose more than defend and they played a leisurely match, without rushing despite the imperative need to win. With Aaron Mooy as a fundamental piece in the preparation, he gave prominence to the ball with simple plays taken to the wings where the wingers Goodwin and Leckie took profitable crosses for Mitchell Duke.

The plan was executed perfectly in the middle of the first part. A play started from the defense ended in the opposite goal with a sophisticated shot from the Australian striker with the crown of the head. The poisoned headbutt directed him towards the base of the stick. Unreachable for Dahmen.

A game suitable for geeks could only provide alternative data on the protagonist of the goal. Duke plays for Fagiano Okayama, the second Japanese team. A footballer who will surely keep his great game in Doha in a memory stick. He prevailed in most aerial duels against the North African defense, he helped the team by unloading balls in all his actions... a jewel.

Tunisia had a hard time destabilizing Australia. All the offensive danger fell on the talented Youssef Msakni, but playing everything on one card has its risks, especially when the chosen one does not have his day. Before the break he had two equalizing chances. In the first wasted, the credit went to the oceanic defense, providential to the cut to avoid a sung goal. In the second, the Tunisians did pay for their mistake by shooting a deflected shot in an accurate position practically in the small area.

The weight of the game fell on the Africans after the restart, but it was difficult for them to find the key. Only Msakni continued to emerge as a threat, with chances sometimes thwarted by goalkeeper Ryan, sometimes by a defense led by an immeasurable Souttar. On the contrary, the lack of specificity by centimeters condemned the socceroos to suffer until the end.

Australia is still alive, with a license to once again dream of reaching the round of 16 of a World Cup, as in 2006. On that occasion Francesco Totti, with a debatable penalty in addition, got Italy out of trouble, in the end champion. The last duel of their group will be against Denmark.