Atlético loses in Porto and is out of Europe

Atlético deepened its crisis with a defeat this Tuesday afternoon at Do Dragao, where it was beaten in the game by Porto, which added to the tie between Bayer Leverkusen and Bruges in Germany made the mattresses fall to fourth place in the group, even out of the Europa League, the competition with which they intended to relieve this season that they have started on such a bad foot. 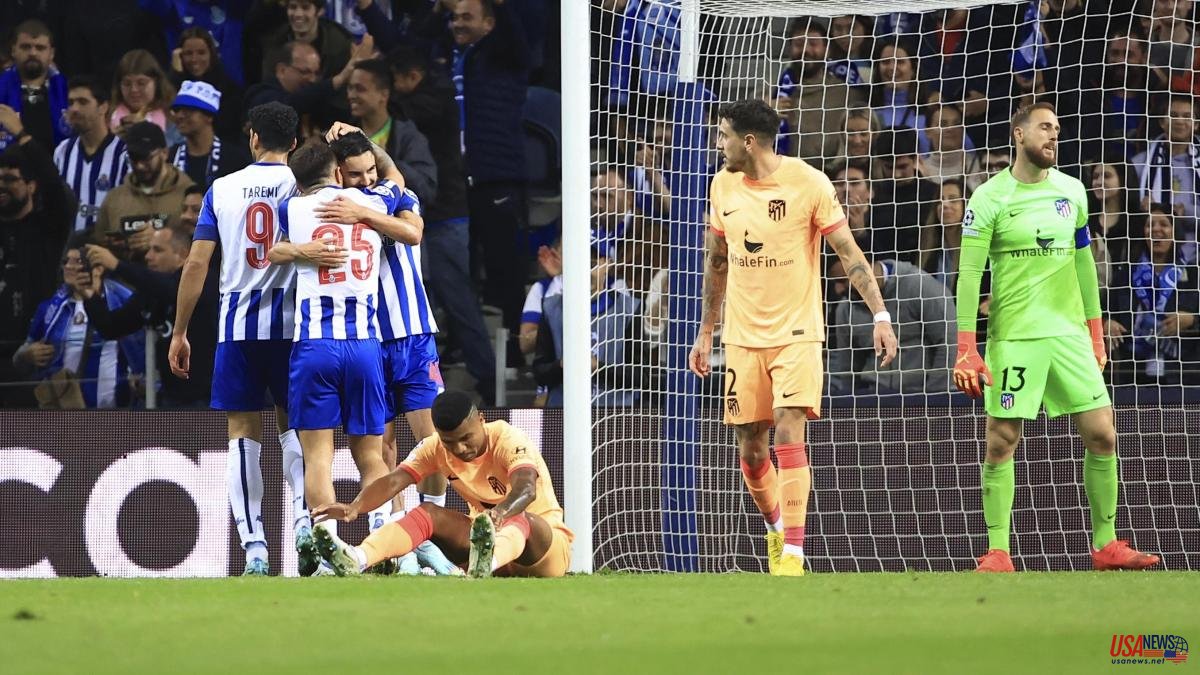 Atlético deepened its crisis with a defeat this Tuesday afternoon at Do Dragao, where it was beaten in the game by Porto, which added to the tie between Bayer Leverkusen and Bruges in Germany made the mattresses fall to fourth place in the group, even out of the Europa League, the competition with which they intended to relieve this season that they have started on such a bad foot.

At the moment, nothing works out for Simeone. The Argentine approached the game with unusual courage and deployed his team with three strikers: Griezmann, Correa and João Félix, who was awarded the starting role for his good minutes at the Nuevo Mirandilla in Cádiz.

However, what Cholo least suspected was that his team would collapse due to the lack of forcefulness in defense, usually the strongest line of the team. Atlético was already out of the game after 25 minutes due to rude errors from the defense, something that is paid dearly against footballers with a good ball kick like Porto.

The first half was one chapter of mistakes after another by Atlético, who missed out on midfielders of the quality of Koke, Lemar and Kondogbia. With De Paul and Witsel in the engine room, Porto found a highway to get to the vicinity of Oblak and the three mattress strikers were totally deactivated from the game.

The first Portuguese goal came very soon, after five minutes on an Evanilson pass from the left flank and an unappealable shot by Iranian striker Taremi. Without settling their game, Atlético was able to receive a second goal from Galeno, which Oblak avoided, but the second fell to him at 24 in another defensive error. Galeno was easily away from Savic and his delayed pass was sent into the net with a shot placed by the Canadian Eustaquio. And the punishment could have been even worse because before the break, Oblak again proved providential because he saved a crossed shot from Otavio, owner and lord of the midfield, with his right leg.

Atlético went to the locker room without having shot on goal and with the feeling of absolute impotence.

The second half was started by Simeone with the same players and Atlético with a slightly more prominent dynamic, but without really worrying Diogo Costa.

Porto lived very calmly, in favor of their comfortable marker. At game time Simeone removed Saúl and João Félix and put Carrasco and Cunha into action. João Félix was fired by Do Dragao with a tremendous boo for his past as a benfiquista star. El Menino had had a completely inconsequential game.

The changes did not activate Atlético at all. In fact, Evanilson missed a very clear chance by throwing high alone against Oblak. He scored at 67 Griezmann but the referee, Orsato, did not validate it because he understood that there was a previous foul by De Paul in a divided ball. The play ended in a hint of tangana.

Finally, a good opportunity for Atlético arrived, a very focused shot by Correa that Costa saved. From there the party was turned into a correcalles. Two stops by Oblak from long shots prevented even greater punishment for the mattresses, who are out of the competitions while the stands of Do Dragao cheered each pass of his team with olés. In addition, already in the last minute, the goal finally came after a corner and a header from Marcano towards his goal. sad consolation. Porto is first in the group and Atlético, fourth.

Incidents: match corresponding to the sixth and final day of group B of the Champions League, played at the Do Dragao stadium before some 45,000 spectators.