Atlético gives the lace to Lopetegui

Julen Lopetegui's credit at Sevilla has run out. 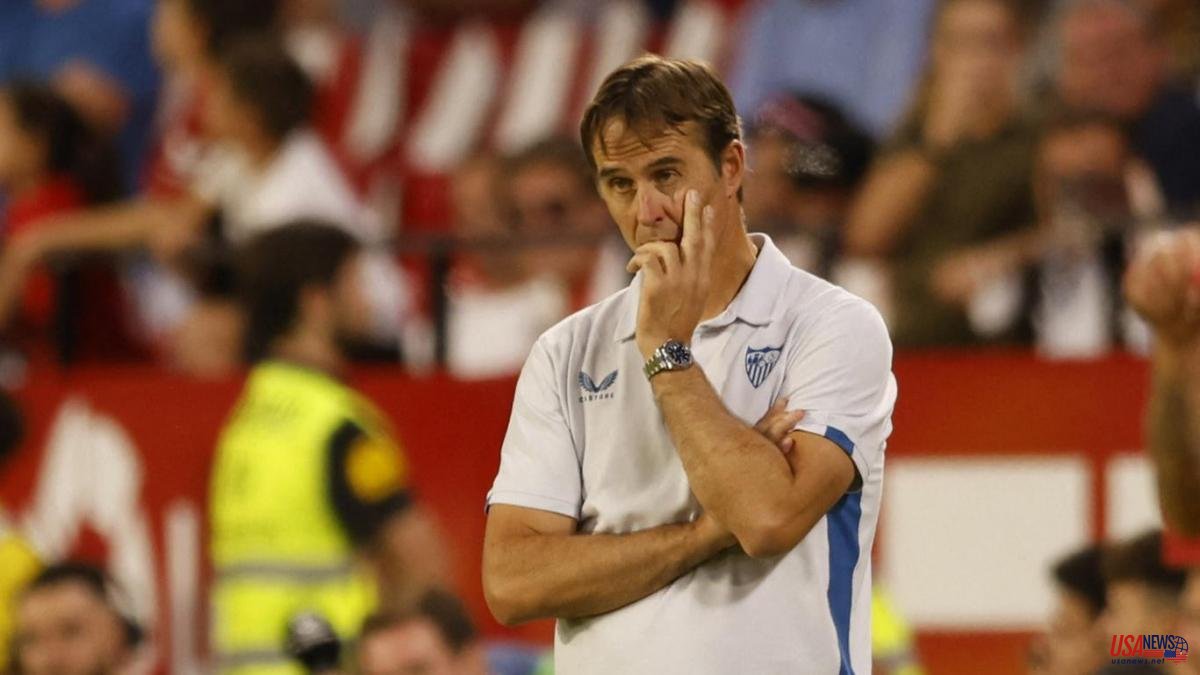 Julen Lopetegui's credit at Sevilla has run out. After several weeks on the wire saving the position with acceptable results (one victory and two draws away from home), Atlético de Madrid left the Basque coach on the verge of dismissal this Saturday. Goals from Marcos Llorente and Álvaro Morata served the rojiblancos to take the three points (0-2) from a Sánchez Pizjuán who dismissed his team with a resounding whistle. The faces of the players after the final whistle was a poem.

Monchi's umbrella –his great supporter- is not good enough to cover the downpour that falls in Seville after the bad start to the season. Not even the national team break has served to appease the spirits in the Nervión. Current football is characterized by poor memory regarding past successes and having little patience. The reality is that a team accustomed to occupying European places has added five points in seven games and is only one away from the relegation zone.

Atlético also came into the game thirsty for wins. The last two defeats against Bayer Leverkusen in the Champions League and Real Madrid in the League left Simeone's team in a bad shape. The Argentine coach changed the scheme and opted for a defensive line of four, placing Witsel for the first time since he signed this summer for the rojiblancos as a midfielder.

Sevilla started the match with good intentions, but still lacks mordant. The sterile domain gradually faded away as Atlético began to set foot in Bono's area. Morata sent the first warning with a high shot after a good mattress play. Shortly after, Saúl would force the Moroccan goalkeeper to stretch to avoid the goal. The third time there was no forgiveness.

Bad luck struck Lopetegui with Llorente's goal. He had just replaced the injured Rekik giving entry to Alex Telles, who in his first play, still cold, was portrayed. An error on a throw-in close to the local area led to Atlético's attacking action. Koke, on the day he became the player with the most appearances in the club's history, put a perfect ball to Llorente and the latter, after pinning the Portuguese winger with a dodge, took an unstoppable low cross shot.

That goal paralyzed a Sevilla already depleted of confidence. Without news of Isco and Óliver Torres, the misunderstood verticality got on the nerves of the stands. Already half an hour later the first whistles were heard.

After the restart Lopetegui made a move. The entry of Rakitic and especially Jesús Navas activated the team, but that spirit to go for the tie was short-lived. It was Álvaro Morata's fault. The forward that Lopetegui left out of the 2018 World Cup - where the coach would not end up going either when he was dismissed after signing for Madrid - took advantage of the weaknesses behind the rival to stand up to Bono and score with a spoon. Round week for the man from Madrid after putting Spain in the final four of the Nations League.

The match entered perfect terrain for Atlético. He was facing a team that attacked without knowing how to deal damage that left a lot of space behind. The match did not end in a landslide because Antoine Griezmann, who re-entered at match time, lacked the killer instinct. Up to three clear goal options wasted by the French.

Sevilla still do not know the victory at home. And it seems almost impossible for Lopetegui to get it, with the hours counted. We will have to wait to find out who sits on the bench next Tuesday against Borussia Dortmund at the Sánchez Pizjuán.

Incidents: Match of the seventh day of LaLiga Santander, played at the Ramón Sánchez-Pizjuán before 37,754 spectators.