Atlético does their homework at the Tartiere

Atlético de Madrid certified their place in the round of 16 after beating a combative Real Oviedo at Carlos Tartiere, with goals from Marcos Llorente and Pablo Barrios, and will be this Saturday (1:00 p. 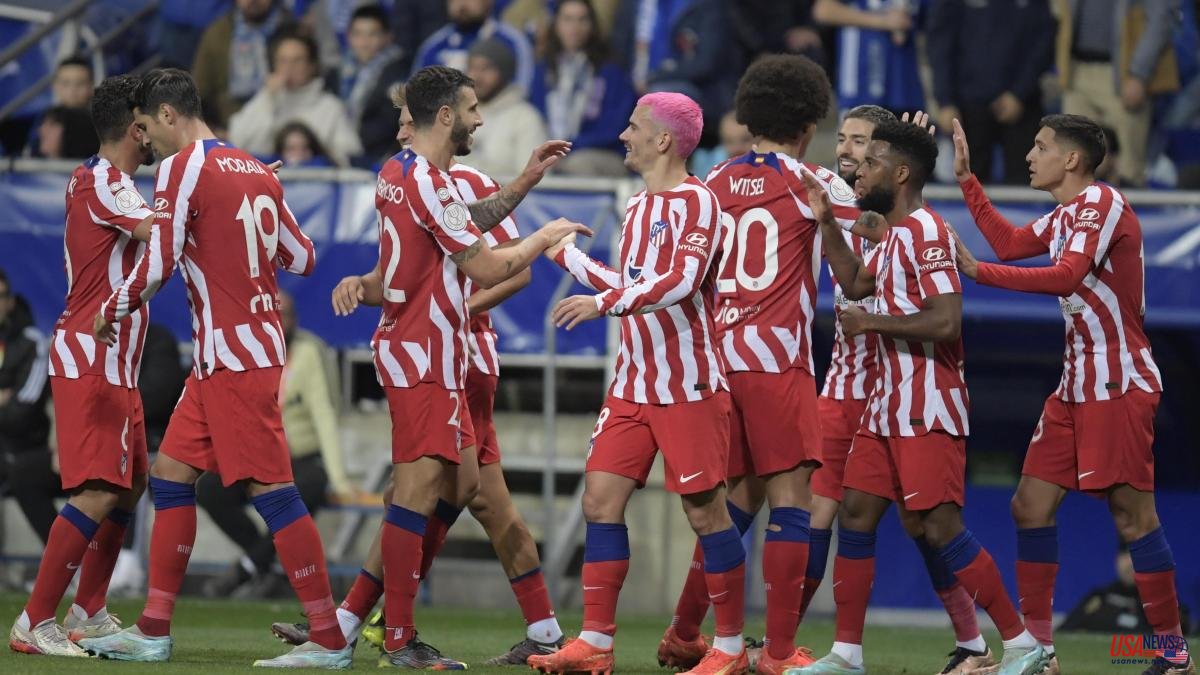 Atlético de Madrid certified their place in the round of 16 after beating a combative Real Oviedo at Carlos Tartiere, with goals from Marcos Llorente and Pablo Barrios, and will be this Saturday (1:00 p.m.) in the draw for the next round.

The Carbayón team surprised with an electric start in which they disputed possession against Cholo Simeone's team. Bold and giving the game a very high intensity, the first minutes were quite a physical display on both sides. Until Marcos Llorente appeared to change the game. The mattress footballer received a good pass from Griezmann between the lines and chipped the ball over the goalkeeper to put Atlético ahead 24 minutes into the game.

The goal would completely change the script and the Madrid team would assert its status as a First Division team to impose its rhythm. Although Real Oviedo would not give up so soon and took advantage of the push of a Carlos Tartiere overturned with his team to return to the charge in the last minutes before the break. Viti Rozada displayed all his quality with an individual action with which he left behind two mattress defenders and put together the shot looking to beat Oblak, but the Slovenian goalkeeper, very attentive, blocked the shot. And in a foul committed by Giménez in the closing stages of the first half, Rodri Tarín was about to confuse the Atlético goalkeeper, but he had no luck and Simeone's men went to the locker room with the advantage that the goal from Marcos Llorente.

In the second half, Oviedo once again showed that they would sell their skin dearly and worked hard to get the tie, but Atlético would not make it easy for them. Carbayones and colchoneros were exchanging blows until in the 83rd minute the rojiblancos dealt the final blow. The young Pablo Barrios, who has made his debut this season with the first team, signed Real Oviedo's sentence in an action initiated by Griezmann and which, after a wall between Reguilón and Correa, ended up at the feet of the youth player, who did not forgive, sealing the pass to the round of 16.

Sevilla also qualified after beating (0-5) Linares Deportivo, from the First Federation, with a hat-trick from En-Nesyri. Mateu Lahoz was once again the protagonist when he sent off the coach of the Andalusian team, Jorge Sampaoli, after 17 minutes of the game. Without the coach in charge, Sevilla knew how to get the game back on track soon thanks to a magnificent En-Nesyri, who scored two goals in the first half. In the second, an own goal by Squadrone in minute 57 further complicated the game for Linares. Lamela increased the gap with the fourth before the Moroccan striker from Sevilla completed his hand with his personal hat-trick to seal their place in the round of 16.

Real Sociedad dominated their match against UD Logronés, but they were unable to reflect this superiority on the scoreboard. Robert Navarro, assisted by Illarramendi, put the game on the face of the txuri-urdin team at 33 minutes into the game, but it would be the only time the electronic would move. The result was short and Sorloth saw a goal disallowed in the second half due to a dubious offside – there is no VAR in this round of the Cup. Without having been able to close the game before, Logroñés pressed on in Las Gaunas in the final minutes trying to put Real in trouble, just as they did forcing penalties against Albacete. The La Rioja team would not be lucky and it will be Real who is in the round of 16.

Mallorca suffered more, which needed extra time to overcome Pontevedra, of the First Federation. Abdón Prats, assisted by Muriqi, scored the first goal and in the second the Balearic Islands and the Kosovar exchanged roles to certify the pass to the round of 16 of the vermilion team.

The surprise came from Alavés, from the Second Division, who eliminated Valladolid in a game that was difficult for the Pucelano team from the start. Feddal saw two consecutive yellow cards for protesting and was sent off in minute 5, leaving Valladolid with ten for practically the entire match. And things would not improve because in the 11th minute Mamadou Sylla would put Alavés ahead with a goal that earned the team from Vitoria the classification.

The round of 16 matches of the Copa del Rey will be played on January 18. The draw for the pairings will take place this Saturday (1:00 p.m.) with the sixteen classified teams: Real Madrid, Atlético, Real Sociedad, Sevilla, Valencia, Levante, Villarreal, Espanyol, Mallorca, Alavés, AD Ceuta and Sporting de Gijón. (In game the Intercity-Barça). This Thursday the last three round of 16 matches will be played: Ibiza Pitiusas-Betis, Nàstic-Osasuna and Eldense-Athletic.