Atlético boasts of punch against Celta

A solid winner at the end against Celta, Atlético de Madrid settled their valuable victory with four goals on five occasions; a demonstration of punch driven by Ángel Correa who contrasted the defensive errors to add a much more expressive victory on the scoreboard than on the field, in which the sky-blue team forgave at the beginning and ended up bowed without discussion for each red-and-white offensive blow, two of them with the decisive intervention of Unai Núñez in two rebounds (4-1). 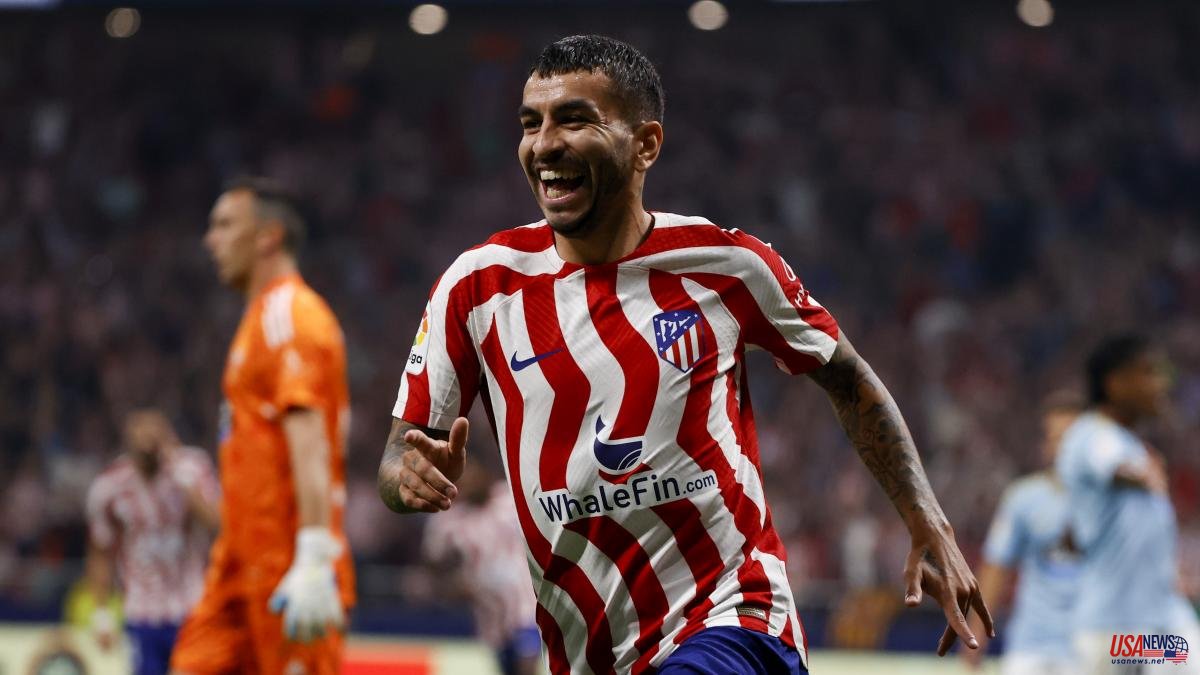 A solid winner at the end against Celta, Atlético de Madrid settled their valuable victory with four goals on five occasions; a demonstration of punch driven by Ángel Correa who contrasted the defensive errors to add a much more expressive victory on the scoreboard than on the field, in which the sky-blue team forgave at the beginning and ended up bowed without discussion for each red-and-white offensive blow, two of them with the decisive intervention of Unai Núñez in two rebounds (4-1).

Without a touch on his spur, in the 49th minute, Rodrigo de Paul's shot would not have been a goal, nor would an overflowing move by Matheus Cunha have ended in 4-1 without the unfortunate rebound in the 82nd minute, but history would also have It would have been very different if the team from Vigo had taken advantage of the defensive shipwreck from which the rojiblanco team started.

Three days after the change (Correa for Joao Félix) that caused the loudest anger towards Simeone of the entire match against Porto, then still with 0-0 on the scoreboard; between the generalized rotation in the eleven (more than revolution), because nothing had more impact on the transformation of the lineup than the unloading of minutes for indisputable men for the coach like Koke (entered for the second part), Marcos Llorente or, currently, Joao Félix) or among the incessant doubts that everything goes through at Atlético, the Argentine striker resurfaced to be definitive.

The '10' Atletico has something special, a footballer who never gives up, who tries to dribble, overflow, shoot and attack however, whenever and in any way, at times with a twist, a determination and a talent that unbalances the match in an instant, without the rival not even intuiting everything that is coming at him suddenly, without his own team being at a desirable level, without even dominating Celta on the field.

Because the staging of Atlético was inappropriate for a team of its height, of such great heights that it has reached throughout this decade directed by Diego Simeone, desperate on the band, shouting at his players to correct each imbalance , each inaccuracy, each pass to the contrary of his footballers, with which he entered the duel, with which he gave Celta the opportunity to have brought the Metropolitano to a boil.

The 52,247 spectators of the rojiblanco stadium discovered at the beginning that there is a goalkeeper at Atlético beyond Jan Oblak, out of the game due to the severe concussion he suffered a week ago against Real Sociedad, for which he forced himself on Wednesday against Porto and for the which was low this Saturday against Celta. In his presentation to the fans (two years after his arrival at the club, this was his first match at the Metropolitano), Grbic showed chiaroscuro. The savior at the beginning, without work in development, and with the final 3-1 blur.

Before, the initial nonsense of Mario Hermoso, this Saturday captain of Atlético (neither Koke nor Oblak nor Savic nor Giménez were on the field, these last three out due to injury, but players older than him in the squad, Correa and Lemar), the Croatian goalkeeper fixed it, enlarged to contain Larsen's shot in the one-on-one they faced in minute 2. The chaos was simply caused by a long ball.

This is how the rojiblanco team appeared in the match, in an expressive anxiety that Celta forgave: apart from the aforementioned option of the Norwegian attacker, released as a starter, with good movements, activity and football -and much less conclusive in the auction-, there was a Hugo Mallo's header moments after it went to the center, to Grbic's body, and the feeling that ran through the entire field that the game was away, without any discussion.

But Atlético, even on that precipice, has a relevant number of footballers, even in this Saturday's rotations (six novelties compared to the 2-1 against Porto), who are capable of finding a goal out of nowhere, when Lemar changed the game, when on the other side, suddenly, Nahuel Molina received it and touched it first, just like De Paul did a few meters ahead and just like Correa did inside the area to land an undetectable right hand for Marchesin. In four passes he overwhelmed Celta, the last three first, the three of three Argentine internationals and the three on the right wing.

Atlético still had to survive another error by Hermoso, this time when the ball went to Kondogbia, recovered by Celta. Then it was no longer Grbic, but the stick that denied the goal to the sky-blue team and Iago Aspas, whose right foot was great, except for a few millimeters. The Galician attacker left the Metropolitano without a goal, for the first time in this League season, in which he had scored in each of the four previous days.

Because Celta, moment by moment, was disappearing from the statistics of the occasions, without clarity in the last meters, diluted with the passing of the minutes, also devoid of the essential raw material that each defensive failure of Atlético had provided, which already He did not commit as many or as visible as before, again with Axel Witsel as an unquestionable guarantee, and who suddenly found himself 2-0 in the second half.

The shot with the inside of the right foot proposed by De Paul did not seem like anything out of the ordinary, but the collaboration of Unai Núñez, who took out the spur to repel the shot, transformed it into the goal that Atlético needed to feel safer in a sport in which certainties are so volatile. Simeone celebrated it with rage, who exploded with the goal, aware of the importance of winning, winning and winning, above anything else, in times like the present, in which pressure and demand are a daily routine.

Undone a long time before Celta, who also left a streak of two consecutive wins at the Metropolitano, Atlético still scored the third. In minute 66. Already a few seconds before, at the beginning of the route towards the opposite goal, still on their own ground, Simeone celebrated the opening to the left of Kondogbia on the counterattack as if it had been a goal, which later was after Yannick Carrasco's dribble and shot.

But Atlético, whose game had not shown more virtue than the punch in attack, the most differential factor of all in football, believed that the match was over in every sense of the statement, with all that that implies when facing there is any First Division rival: Celta scored 3-1, indicated by Grbic, but also by the defense, which opened a huge space on its way out for Gabri Veiga to uncheck, who controlled and released a cross shot that slipped through the goalkeeper's post. It was the 72nd minute.

Antoine Griezmann had already entered, in that invariable stretch between 62 and 63 in which he emerges from the bench for each match while Atlético and Barcelona agree, and the rojiblanco team had felt like a winner, who played at times with the fire that would have been a threatening 3-2, but that tied the 3-1, first, and achieved 4-1 later, in a great play by Cunha that ended with an own goal by Núñez. An indispensable victory in the current times and the expectations of Atlético.

Incidents: match corresponding to the fifth day of LaLiga Santander played at the Cívitas Metropolitano stadium before 52,247 spectators.