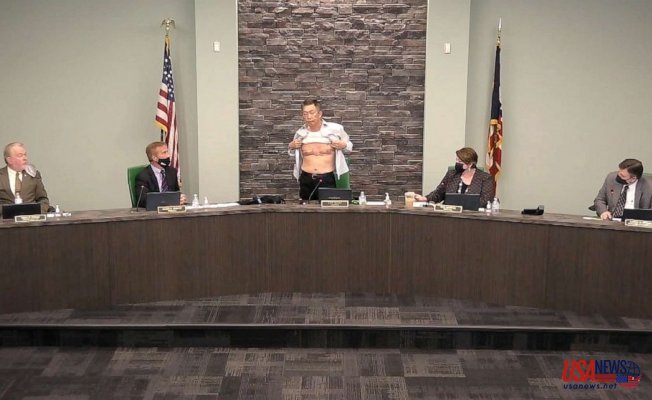 "It is just wild the ugliness which came out in the last few decades," Wong explained.

A Asian American veteran raised his shirt and bared his military scars, announcing,"Is this patriot enough?" In a strong speech to denounce hatred against the Asian community.

Lee Wong, a board member of West Chester Township, a suburb of Cincinnati, spoke out on the rise of hate crimes against Asian Americans in a public meeting on March 23.

He said he had been quiet for too long being victimized due to his race.

"People question my patriotism, that I don't seem American enough. They can't get over this face. I want to show you something as I'm not afraid. ... I'm going to share with you exactly what patriotism resembles," he said, taking off his suit coat, untying his tie and unbuttoning his shirt.

Wong, 69, showed significant scarring together his chest, continued throughout his time at the U.S. military, and stated:"Here is my proof."

"Today," he added,"is this patriot enough?"

Video of his speech went viral and led to an outpouring of support.

Wong explained he arrived at the U.S. at age 18 from the island of Borneo, and just two decades later he had been beat up in Chicago. That perpetrator never faced charges, he said.

"I was not prepared or [had] anything written down," Wong told ABC News. "I thought it was only necessary with the things happening -- using a combination of the Atlanta shooting along with the attacks on local restaurants against Asian Americans."

He said he's observed racial animus toward Asian Americans burst over the previous four decades. The coronavirus pandemic and its supposed origins in Wuhan, China, was cited as one motive for the spike in anti-Asian discrimination in america over the previous year.

From March 19, 2020, to Feb. 28, 2021, there have been over 3,795 hate incidents, including verbal harassment and physical assault, against Asian Americans and Pacific Islanders in the USA reported to Cease AAPI Hate, a nonprofit company that monitors such incidents.

Wong clarified he continued his scars during basic combat training while in Fort Jackson, South Carolina. He moved on to serve for 20 years, such as deployments in Germany and Korea.

Despite his support, he said he has faced repeated discrimination, even in his own community.

"What hit me the most is the men and women who came to me so vocal and bold to inform me that I'm not American -- I do not'look American' or I'm'not patriotic enough once I was holding the [American] flag, a big Army jacket and retired Army hat walking about in the Board of Elections," he explained. "It was so ugly for people do anything, to make fun of Asian Americans and state that we're less exceptional."

1 afternoon in October,'' Wong stated, a man appeared out his home dressed like a ninja.

"I knew that was the way to intimidate me," he said. "I kept quiet."

And then he didn't.

"I learned that if you don't talk," Wong added,"that is when trouble starts."

Wong warned that the spate of bias incidents against Asian Americans is nothing new but was exacerbated by the pandemic.

"Racial prejudice against Asian Americans has been going on for a long time, since the 1800s with the Exclusion Act and that," he explained. "It is just wild the ugliness that came out in the last few decades, with words like'China virus,' and how the country handles the coronavirus and then they blame it on Asian Americans? It is just crazy."