Artists take their private collections out of the closet

In an enigmatic sculpture made of chicken bones covered with wood paste, the surrealist Jean Benoît represents the bust of a man, apparently devastated and aged, from whose head a mysterious figure emerges. 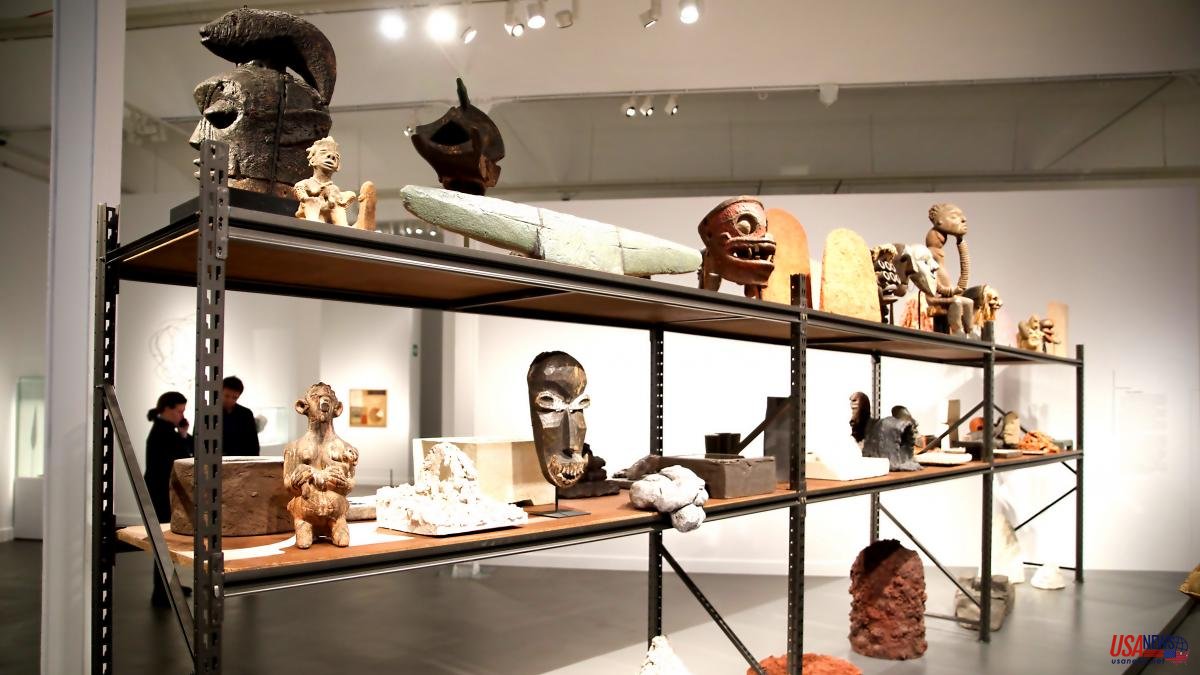 In an enigmatic sculpture made of chicken bones covered with wood paste, the surrealist Jean Benoît represents the bust of a man, apparently devastated and aged, from whose head a mysterious figure emerges. The piece, entitled A single thing in mind, is part of the private collection of the painter Miquel Barceló and could well serve to illustrate Gods, magicians and wise men, a beautiful and suggestive exhibition with which the curators Maite Borràs and Àngels de la Mota they invite us to delve into the imaginary, interests and obsessions of different artists based on the objects they looked at and wanted to have close by in their intimate rooms or in their workshop. Or in both places at the same time, like Barceló himself, the walls of whose studio are lined with small drawings, skulls and stuffed animals, while the space in which organic or exotic objects inhabit are grouped into small cabinets of wonders next to a Basquiat vanitas or a copy of a Diego de Ribera.

Gods, magicians and wise men, at CaixaForum (until April 2) Pathosformeln is born, an installation by Rosa Amorós presented at the Estrany-de la Mota gallery, in which she rescued some of the objects from Africa, Asia and the center and North America that she had collected with four hands together with her husband, Gustau Gili. Amorós lost sight of them in 2008, when after the death of the publisher she moved to a smaller house and kept all the pieces in a series of boxes stacked on a shelf in her study. “I wanted to look for possible coincidences and references with his own work”, says Àngels de la Mota, who after verifying the power of that game of affinities -African masks, anthropomorphic figures or prehistoric tools arranged on the old studio shelf next to his sculptures of stone or ceramic-, wanted to extend the proposal to other artists, in this case taking as a starting point works from the La Caixa Foundation Contemporary Art collection.

"I'm not a collector but a hoarder because I don't look for the pieces, I buy what I find", confessed Luis Feito, while for the Japanese photographer Hiroshi Sugimoto "my collection is my mind". “Everyone has their own way of collecting and approaching the choice of objects”, points out Maite Borràs. The exhibition focuses on art collections from a non-European tradition, emphasizing what there is "in search of oneself in the other, as well as the look of the other in oneself". Tàpies, who came to put together one of the most singular and exquisite collections in Barcelona, ​​which he contemplated on a daily basis, looked at oriental art, like those Japanese scrolls in which there are no limits between calligraphy and painting and which here dialogue with a gray canvas with black strokes. Miró also surrounded himself with objets trouvés, kachinas from the Indians of the American West whose eyes he would later replicate in the series of lithographs Homage to Joan Prats, or small rod puppets (a gift from Antonio Saura) that would later inspire the gigantic puppets created for Morí el Less with the company La Claca.

Like Miró, Feito, who, except for the kitchen, had a house full of objects, also acquired numerous kachinas on his trips to the Western United States, but unhappy at having to settle for reproductions for tourists, he decided to make them himself. They have traveled to CaixaForum together with gigantic Japanese brushes, Chinese stamps or a seated Buddha loaded with coral necklaces that accompanied him in his bedroom.

And if Fieito becomes the other, Joan Hernández Pijuan “shows us the search for himself in the other”, adds Borràs, who quotes Baudrillard: “One always collects himself”. Indeed, Hernández Pijuan assembled his collection together with his wife Elvira Maluquer from the eighties, when his work was fully consolidated, not looking for inspiration but trying to recognize himself in pieces from oceanic or Australian aboriginal cultures and african. The exhibition also makes stops at the African art collections of Georg Baselitz and specifically at the Yombe-Kongos pieces from the Democratic Republic of the Congo, so close to his Mother with a black child; in the collection of archaeological objects of Manolo Millares or in the bobo-fing masks bought by Susana Solano in Burkina Faso that she will later transform into iron sculptures like Contra la piel.

"The objects in an artist's collection have a special aura because they have been testimonials or protagonists of the creative act and can reveal many things to us," concludes Borràs, who dedicates his own room to Hiroshi Sugimoto, whose beautiful black and white photographs (he has more than thirty years portraying seascapes, only sea and air, the origin of life) not only hang on the walls but also in a replica of a Gorinto, a small Japanese commemorative shrine where Buddha's ashes were deposited, at the that he incorporates an optical glass.