Argentina: it's not the tactic, it's the soul

The expression in crescendo seems invented for Argentina in this World Cup. 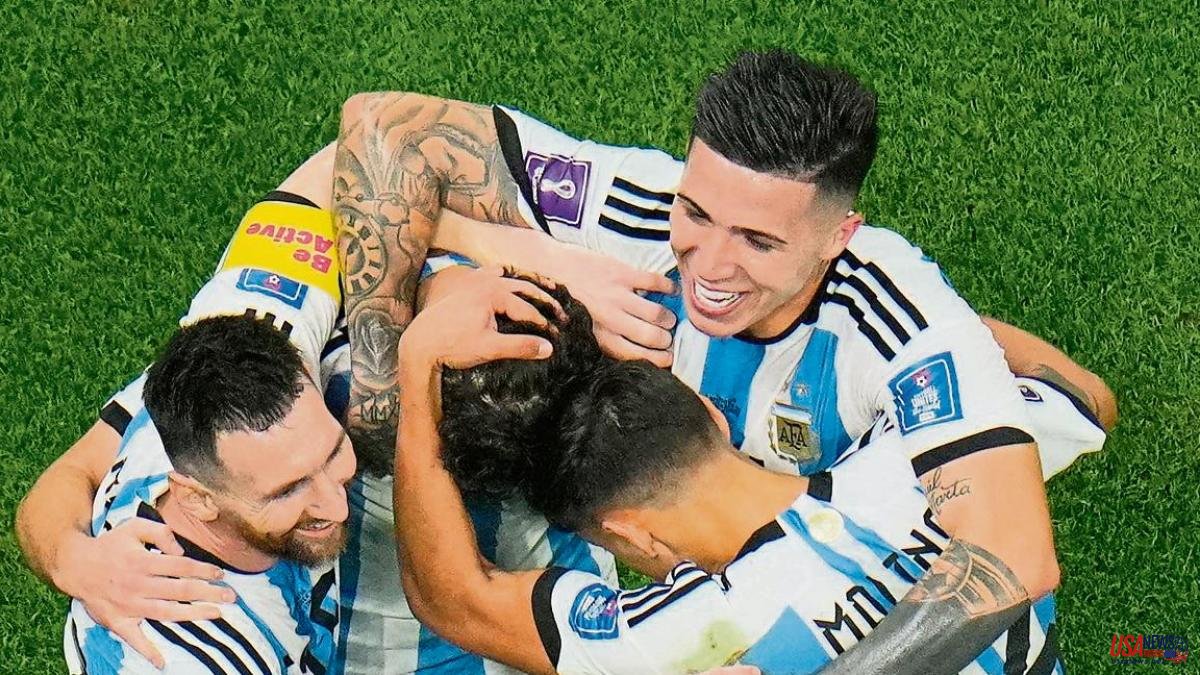 The expression in crescendo seems invented for Argentina in this World Cup. After being defeated by Saudi Arabia in the opening game, the albiceleste team overcame an agonizing phase of survival that, far from depressing it, unified it, so that its last game, the semifinal against Croatia, was the most placid it played . Today Scaloni's group is tactically recognizable and has the intangible soul, so big that the footballers do not fit on the shirt. Doubts buried, every Argentine player now believes he is better than he is, except Messi, who has been since he was born.

El Dibu and his henchmen

The Argentine defensive line started badly, conceding two goals against Saudi Arabia and then, already in the phase of the decisive crosses, letting Australia and the Netherlands make the last minutes their own with extreme ease. Against Croatia that no longer happened. The spiritual leadership of the rear guard is held by two thirty-somethings. Emiliano Dibu Martínez has conceded seven goals but a key save against Australia in the last minute and his extraordinary penalty shoot-out against the Netherlands exaggerated him. Ahead, Otamendi acts as a high-ranking military man. An old-fashioned central, if you have to be scared, it is. And on the sides, the sides are compliant and do not clash. They attack just enough but if they do it is to do damage. Nahuel Molina scored against the Oranje.

CENTER OF THE FIELD

Except for De Paul, who is still there, the midfield and its renewal during the tournament have coincided with the improvement of the team. Enzo Fernández did not start until the third game against Poland; Mac Allister entered in the second against Mexico. Today no one can move them from the starting eleven. They bring youth, technical quality, mileage and an extraordinary attitude in pressure. They have changed the face of Argentina.

The dependence on Messi is usually counterproductive when those who accompany him do not scare. In this way the defenders deal exclusively with the ten and its danger is reduced. The emergence of Julián Álvarez, a substitute for the first two games, has had an impact. The City striker has already scored four goals and his understanding with Messi is going from strength to strength. Di María's physical condition concentrates Argentina's gunpowder in both of them.

What to say about Leo Messi

Whether he wins the final or loses it, Leo Messi's World Cup will be remembered as one of the biggest declarations of love from a soccer player. At 35, every game with him on the pitch has been worth it on its own. Soccer and spiritual leader of the albiceleste team, Messi leads the list of scorers along with Mbappé, both with five, and also the list of assists with three, equaled with Griezmann, Harry Kane and Bruno Fernandes. Messi is before his last great game with Argentina. Except for the French, half the world wants it to go well.

They gave him the reins after the bad role in the World Cup in Russia because there was no other closer (at that time he was the U-20 coach) and four years later that interim position has given way to absolute credibility. Champion of the Copa América, a title that freed old tensions that had been dragging on, and guided an extraordinary streak of matches without losing (36, until Saudi Arabia arrived), Scaloni passed the stress test with which he began the Copa del World. With the country in a state of shock, Scaloni conveyed calm and downplayed the importance of football in a nation where saying that is practically countercultural. The sanity attack felt good and Scaloni has known how to grow as a coach. His interventions in the team have only improved it.