The production of the Parliament Channel was skilful in puncturing the image of Laura Borràs and Jordi Turull sitting in the guest gallery at the precise moment that Pere Aragonès announced his idea of ​​undertaking a “clarity agreement”, taking the Canadian route as an example. 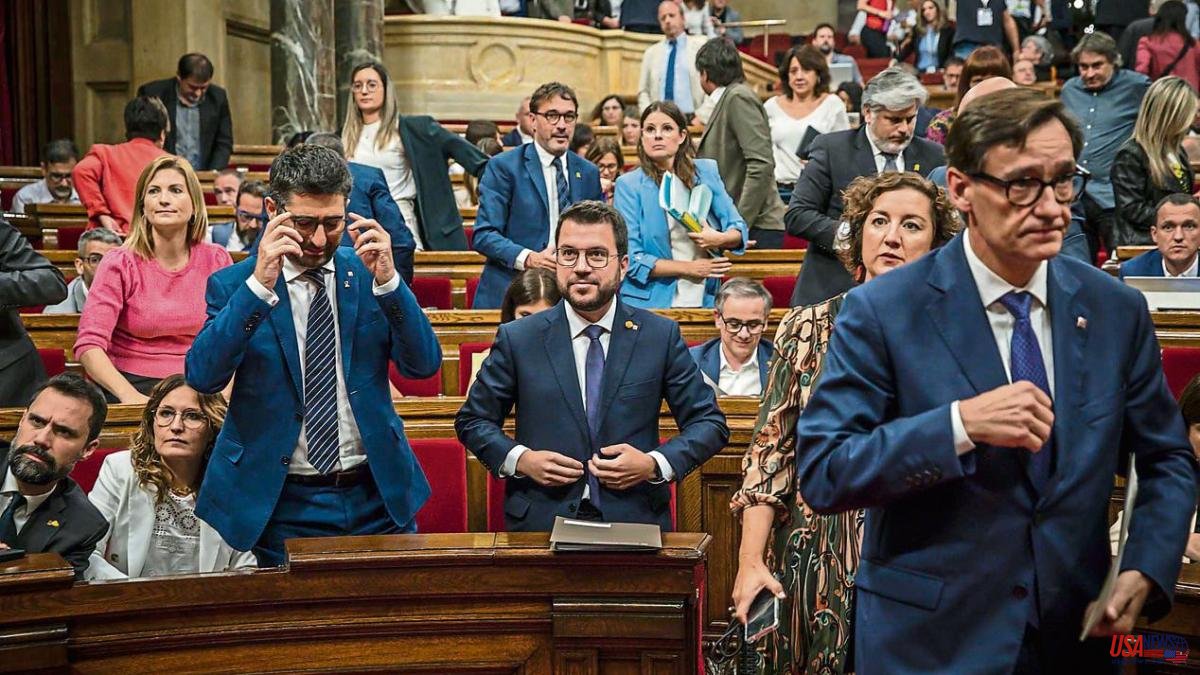 The production of the Parliament Channel was skilful in puncturing the image of Laura Borràs and Jordi Turull sitting in the guest gallery at the precise moment that Pere Aragonès announced his idea of ​​undertaking a “clarity agreement”, taking the Canadian route as an example. The general secretary of Junts looked at the ground, bored, holding his head with the palm of his left hand on his cheek; the president of the Parlament, suspended from functions, consulted the mobile, but raised her head to dissent annoyed and swaying it slightly from one side to the other while biting her lower lip when the head of the Government assured: “Although some do not like it, although many of us do not like it, reality is stubborn and we have to build the ways so that the instruments we put in place to vote can implement the result”.

If the intention was to convince Junts not even to consider leaving the Government and indeed the postconvergents put aside the idea of ​​leaving it, it will be to their displeasure and because they have no other choice. serious faces. With the "clarity agreement" none of the pretensions that served to formulate an ultimatum - which was diluted as the days went by - found an answer, in the opinion of JxCat. Neither the formation of a new General Staff of the procés, nor the coordination in Madrid.

“How can we trust a new proposal now if the agreement that facilitated his investiture is not fulfilled?” said Albert Batet, president of the parliamentary group, without concluding whether they give scope to the initiative. However, another ultimatum did come out: the threat to ask the president for a matter of trust if he does not comply with the investiture agreement. A matter of trust that the CUP has also registered for before the end of 2022 in the form of a motion in the next ordinary plenary session. It will then be seen how many supports he harvests. The president is the only one who has the power to call it. He rejected the possibility immediately.

The Junts bench was apathetic during the president's speech. Not a single clap, he tore from her. Not even when he praised the work of the post-convergence ministers. Esquerra was even left alone applauding when Aragonès thanked the work of Josep Maria Argimon–in the ranks of JxCat– for his work with the fourth dose of covid vaccination. Only the ministers of Junts showed their gratitude when Aragonès finished with the hour and a half of speech.

What is clear is that Aragonès tried with this initiative to extend the ERC dialogue strategy and give room to the table where the governments sit to resolve the political conflict.

The president proposed in Parliament, during the general policy debate, a "clarity agreement" inspired by the Quebec case that lays the foundations for an agreed and "effective" referendum. And that in Canada the law has served rather to deactivate referendums and not to encourage them, and that the Quebecois separatists rejected it. In any case, it would be a starting signal to study if they are marked, for example, from when it is possible to ask for a consultation, the percentages of participation necessary for the hypothetical referendum to be validated, or who would be called to the polls.

The idea did not excite either JxCat or the CUP, but neither did the PSC and the commons, whom it intended to drag to make a referendum viable. The latter paradoxically did not endorse it despite the fact that they brought a proposal for a "clarity pact" to Parliament in 2018. It fell on deaf ears with the vote against Junts and the CUP. Only ERC seconded it. "Welcome, but you told us it was a past screen," said Jéssica Albiach, leader of En Comú Podem, yesterday.

Be that as it may, the idea of ​​the "clarity agreement" is for the moment marking the rules of the game with the involvement of experts, jurists, political parties and civil society. But its materialization is yet to be defined. Aragonès is studying all the options, although it could lead to a new national pact for self-determination, and not so much to the crystallization of a law, such as the one created in Canada after the 1995 Quebec referendum, which set the conditions for future consultations.

This proposal would have a first phase that would remain outside the dialogue table and in which the independence movement would undertake a double process of accumulation of forces: gathering the maximum possible support and consensus in Catalan society, and obtaining international support.

With these two pieces completed, the president would present, then yes, this "clarity agreement" face to face before the State at the dialogue table. Aragonès has not set deadlines for all this.

Before arriving at Parliament, the PSC, Together, the CUP and the commons briefly reported. He knew that the socialists would refuse. In fact, the Government of Pedro Sánchez from Madrid slammed the proposal right away, a few minutes later. The Catalan socialists, too. "I don't agree, it doesn't solve anything and it's déjà vu," said Salvador Illa.

The president's response came from the newspaper library. In 2016 Miquel Iceta, then leader of the PSC, formulated the same initiative to try to unravel the procés. "It's not so bad if the PSC defended it (...). How is it that agreeing on conditions with the State was possible according to the PSC when there was an absolute majority of the PP and now it is not?” Aragonès replied to Illa.