Aragonés presents an ultimatum to the councilors of Junts, who defend the question of confidence

The president of the Generalitat, Pere Aragonès, wants to take the pulse of his cabinet and has proposed an ultimatum to the ministers of Junts per Catalunya at the meeting of the Consell Executiu that was held this Wednesday afternoon in Palau. 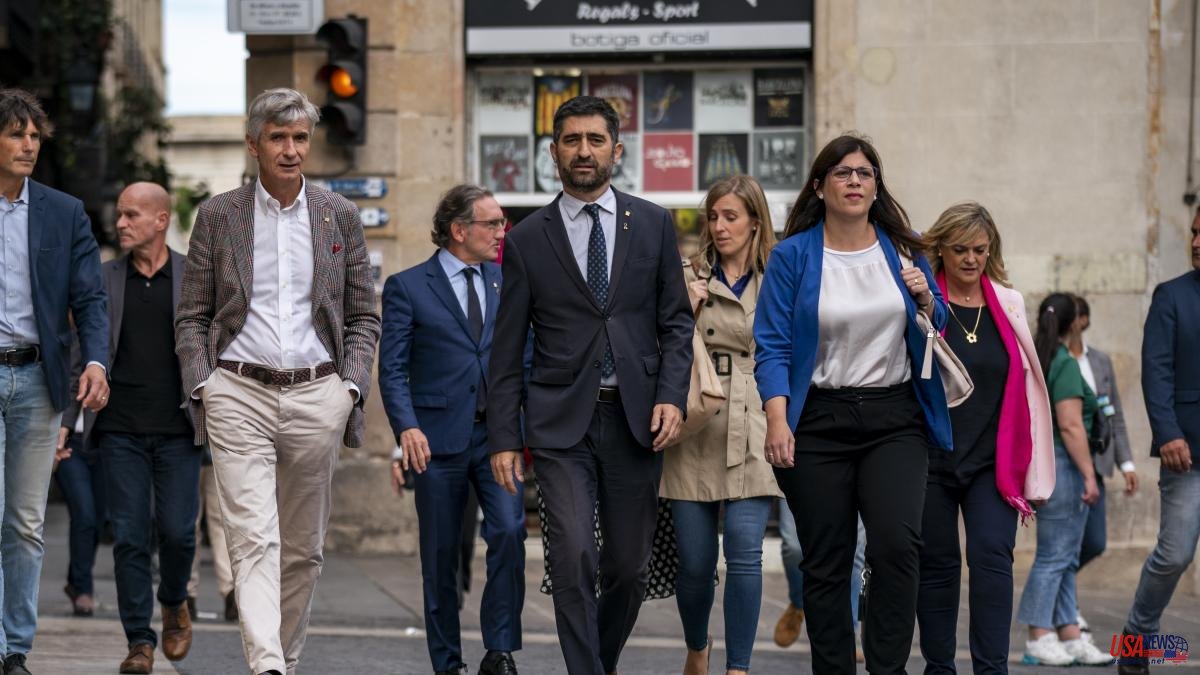 The president of the Generalitat, Pere Aragonès, wants to take the pulse of his cabinet and has proposed an ultimatum to the ministers of Junts per Catalunya at the meeting of the Consell Executiu that was held this Wednesday afternoon in Palau. In that appointment he asked the post-convergence leaders if they are the Government or the opposition, in addition to asking if they knew the content of yesterday's speech in the general policy debate. "Junts must make a decision after many months of indecision, either they are the Government or they are the opposition," sources from the Presidency point out.

For their part, the councilors of JxCat and the leadership of the party, represented by the general secretary, Jordi Turull, the president, Laura Borràs, one of the vice-presidents, Josep Rius, and the president of the parliamentary group, Albert Batet, have eaten together this noon to set a unanimous position before the extraordinary meeting of the Executive Council that Aragonès has called.

The post-convergent members of the Government have defended Batet's position before the president of the Generalitat, according to sources consulted. The head of the parliamentary group called on Tuesday for the head of the Catalan Executive to submit to a matter of trust if there is no "specification and guarantees" in compliance with the Govern agreement that was signed in May 2021. After the meeting of the Consell Executiu , Aragonès has summoned Turull and, once both have analyzed the situation, the President will appear to explain the point of the crisis between the two forces. At the same time, the JxCat executive will meet at the match headquarters and assess how the board looks.

At the Palau meeting this afternoon, on foot through Plaça Sant Jaume, the seven ministers of Junts have arrived together, en bloc, projecting an image of unity and cohesion at a time of maximum tension with their partner. In Junts they want to redirect the crisis by negotiating with Esquerra and for this they ask for guarantees that what was agreed will be fulfilled, while ERC for now has not moved an iota and they believe that it is Junts who should go back and retract yesterday's invective. In addition, in Calàbria Street they consider that Aragonès did respond to Batet's demands and was willing to address them.

In this way, both partners put the ball in the other's court in the week in which parliamentary activity resumes and the orientation of the new political course is marked, with the fifth anniversary of 1-O just around the corner.

Batet's intervention yesterday made Palau and the Republican caucus very angry, which believes that asking for a question of trust, something that will also put the CUP at the center of the debate in the next plenary session, means crossing the red lines of disloyalty between partners and that it is a torpedo that affects the entire Executive, not just the president, at a time of social and economic crisis.

Junts maintained a severe and strict vow of silence yesterday throughout the day and the formula used by his leader in Parliament was unknown except to a small core of the leadership. In the Government and among the deputies, many did not know what the president would say in the Catalan Chamber, according to some sources.

Batet's words, beyond anger, have caused the Catalan president today to suspend his agenda to address the crisis, first with his closest collaborators, and then with partners. The Vice President of the Government, Jordi Puigneró, has also canceled his agenda and has met with the party's leadership in the Parlament in the morning, before the joint lunch this afternoon, which the Minister Jaume Giró has missed for reasons of agenda, since it has had an act in Vall de Bianya, in La Garrotxa. But he has arrived at the meeting in Palau with his companions.

Although the option of throwing Junts del Govern into the nucleus of the president has been studied, finally the Republicans have summoned their partner to make a decision and leave themselves if they are not comfortable or satisfied with the current situation. JxCat, for its part, insists that its main option is not to leave, but rather that what was agreed last year be fulfilled and they emphasize that complying with the pact would give the Government more stability.

From Junts it was pointed out yesterday that the breaches they denounce occur in "nuclear" issues for them, and training sources reason that if the investiture pact had not included the strategic direction of procés, the coordination in Madrid or that the dialogue table with the central government focuses on self-determination and amnesty, in the current terms, perhaps the elections would have been repeated and the agreement that facilitated the investiture of Aragonès on the horn would not have been given.

Despite the verbal escalation of these last hours, coinciding with the general political debate, in JxCat they consider that "before breaking the Government there are other options", such as the question of trust that Esquerra does not want to hear about, and the Turull's training in this matter has not put deadlines in between, at least until now.

In any case, before any step is taken on the role of the postconvergents in the Executive, the militancy must make a pronouncement in a consultation that right now has no calendar, no question. It will be the executive who summons her when she sees fit.