Aragonès points out that in the case of the Borràs case, "everyone will make the best decision" to preserve the Parliament 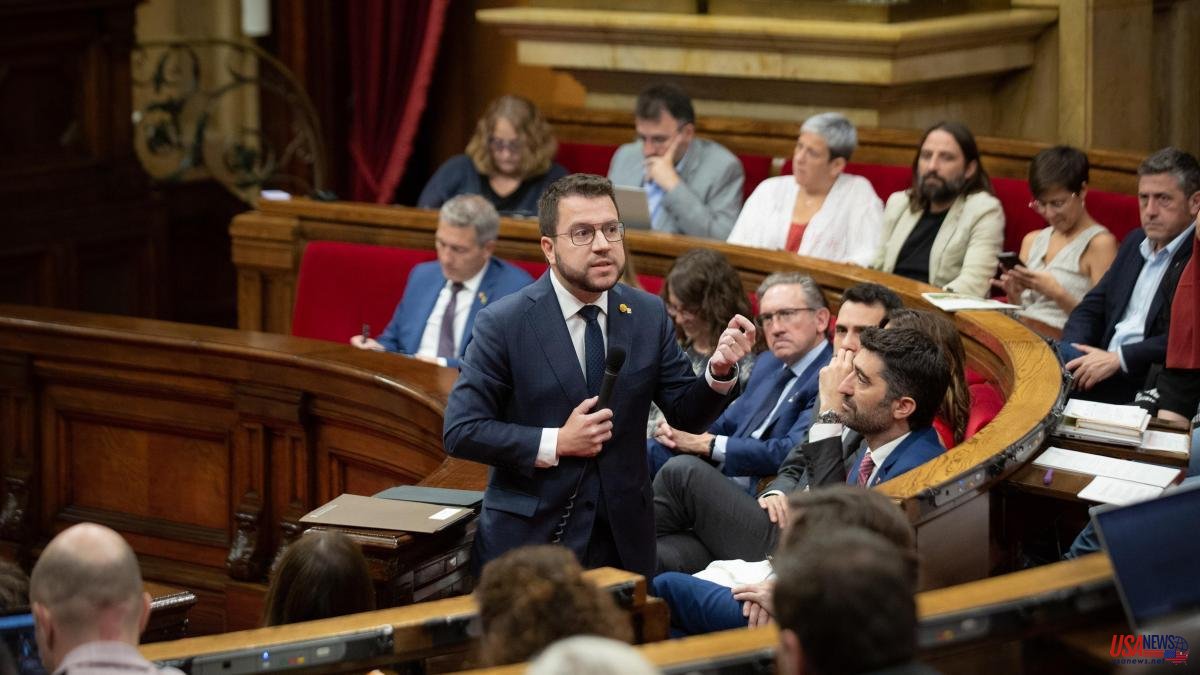 "It seems more like a control session to a president of the Parliament than to the president of the Generalitat." This consideration of Albert Batet, leader of the Junts per Catalunya group, is applicable to the interventions of Vox, Ciudadanos and the PP, which in today's plenary session of the Catalan Chamber have taken advantage of their turn to speak to demand that Pere Aragonès clarify , firstly, how he is going to act when Laura Borràs is brought to trial and, secondly, to act in the face of the Table's refusal to withdraw the delegated vote from former minister Lluís Puig, from JxCat. The response of the head of the Government was easy: “My capacity for intervention is the same as that of any of the 135 deputies in this Chamber. Because my vote is a vote as a deputy and the same as all the rest”. Separation of powers. Of course, Aragonès has made it clear that the decision of the Prosecutor's Office must still be known, but at the same time he has avoided ruling on the Borràs case and has limited himself to pointing out that when the time comes "everyone will make the best decision to preserve the service public” before the Borràs case.

And it is that while waiting for the oral trial to actually open, so far the positions in the pro-independence ranks have not converged. Borràs announced yesterday that he does not plan to resign despite the crimes of prevarication, fraud against the administration, falsifying a commercial document and misappropriation of public funds that are attributed to him while he directed the Institució de les Lletres Catalanes (ILC). But the ERC has already expressed several times that the best thing, in its opinion, is that the president "does not drag" Parliament and hides behind it for a particular cause that has nothing to do, in the opinion of the Republicans, with "the repression ” or 1-O. The CUP, for its part, assures that it is awaiting the decision of JxCat and ERC, arguing that it was these two groups that invested Borràs as president.

However, both Esquerra and the CUP wield the regulations of the Parliament, which in its point 25.4 stipulates that in the event that the accusation is for "crimes related to corruption", the Table of the Parliament, once an oral trial is opened "has to agree to the suspension of parliamentary rights and duties immediately.” Something that would not imply the withdrawal of Borràs's deputy act, but the suspension of her rights as such.

“He knows that as president I owe myself to this Parliament and I fully respect the division of powers”, Pere Aragonès responded to the leader of the PP in Catalonia, Alejandro Fernández, before stating that “when decisions have to be made, everyone will make the decision that it will be more convenient for the vocation of public service that we members of this Chamber have”.

Fernández has not been satisfied with the answer, despite assuring that he does not demand an apology for the accusations against Borràs and that he does not question the presumption of innocence. However, he has demanded responsibility from her, because he voted for her to be president of the Parliament, and has recorded two principles that must be safeguarded: the "prestige and dignity" of the Catalan Chamber and "respect" for the Parliament's regulations. Fernández has manifested himself without ambiguity to request the resignation of Borràs, but immediately afterwards he has demanded Aragonès "transparency" and "exemplarity" because "the ball is in his court".

As for the delegation of Lluís Puig's vote, it was Carlos Carrizosa, leader of Cs, who shouted to the sky. He has warned the independence movement that they will not be able to "twist the arm of the rule of law in Catalonia." "Illegally counting Puig's vote they will be tried and presumably disqualified." The plenary session was interrupted at the end of the control session for the president of the Generalitat after filing reconsiderations by the PSC, Vox, Cs and the PP for this delegated vote.