Aragonès offers to Sánchez to unlock the judicial renewal

The PSOE and Pedro Sánchez are already entering into conversations with the majority of the investiture to carry out the renewal of the Constitutional Court and the Judiciary through a bill, since it does not progress through the introduction of amendments in the reform of the Penal Code . 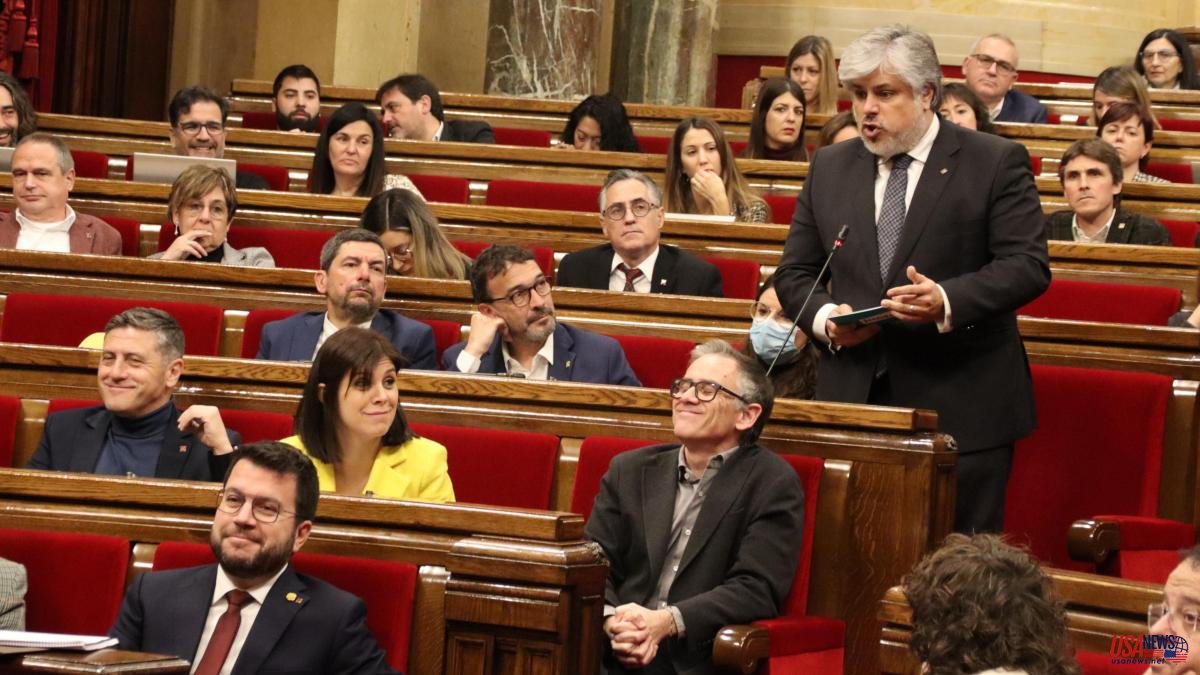 The PSOE and Pedro Sánchez are already entering into conversations with the majority of the investiture to carry out the renewal of the Constitutional Court and the Judiciary through a bill, since it does not progress through the introduction of amendments in the reform of the Penal Code . Despite the fact that everything indicates that the President of the Government is going to have enough support, Pere Aragonès wanted to remove all doubt and make it clear this morning that ERC is not going to stand out and that it will collaborate to overcome the blockade of the TC. "Unlike what some did, we will not ally ourselves with those who are attacking the decisions of Congress and the Senate and we will not look the other way," said the head of the Government. Of course, Aragonès has assured that he will persist in his demand for a referendum and has called on Junts and the CUP to accumulate forces to achieve it.

"We will not look the other way, but we will continue to be demanding and make progress in resolving the political conflict," the president said at the control session this morning in Parliament. A phrase that connects with the one that the leader of Esquerra in Madrid, Gabriel Rufián, has referred to Pedro Sánchez in Congress: "The difference between you and us is that we will not leave you hanging."

But both Aragonès and Rufián have not avoided attributing the mess over the renewal of the judicial bodies to the negotiation process at the dialogue table between the Spanish and Catalan governments. The President of the Generalitat has been the clearest: "What is happening at the institutional level in the Spanish State is not unrelated to the momentum of the negotiation process", because, in his opinion, it has been within the framework of a bill for the reform of the Penal Code - the result of the dialogue table - that "the entire judicial right has raised its robes above to try that the precepts introduced" to renew the TC and the CGPJ cannot advance.

Be that as it may, Aragonès has defended that the dialogue process between governments, which has led to the repeal of sedition and the reform of embezzlement, is one of the causes of the institutional clash that is taking place between the TC and the legislative chambers. "Signal that we are advancing", the president congratulated himself. In this sense, he believes that the blockade in the judiciary is an "opportunity" that the independence movement also has to "take advantage of." Likewise, he has asked Junts and the CUP to forge internal alliances because, the president considers, this is the only way to move forward. According to Aragonès, the meeting point must be, in any case, "the banner of dialogue", something to which neither Junts nor the CUP seem willing.

The Cuban Xavier Pellicer has ignored Aragonès's request and has once again amended the Government's strategy: "They have taken the wrong course." Likewise, Pellicer has indicated to the leader of the Catalan Executive that the negotiating table and the pacts with the PSOE in Congress are counterproductive for the independence movement. "We will achieve it from the mobilization, not from the demand to exchange cards", he stated. In this sense, for the CUP, the direction taken by the executive is precisely "demobilizing" the movement. “We can only advance if we have more strength”, Aragonès replied.

Likewise, Albert Batet, president of the JxCat parliamentary group, has called on the independence movement to take "action" before a State that it considers "failed." The difference with ERC is that Junts does not believe in dialogue. "We want to finish what we started on 1-O", the post-convergent has expressed very significantly. "The Spanish State is a failed democracy, with a corrupt monarchy and a judicial system that has become an inquisition," Batet said before telling Aragonès that in his almost two-year term "the whole of the independence movement has not met not once."

Also during the control session in the Parliament, Citizens and PP have complained to the president of the Government about the consequences of the process. For the orange formation, "the only thing that has been achieved is to colonize Spanish politics", while the popular ones consider that Catalonia is located "at the tail of everything". In his turn to reply, the also national coordinator of ERC has exhibited economic indicators to refute the intervention of the popular spokesman, Alejandro Fernández, and has reproached Carlos Carrizosa, from Cs, that his party "took advantage" of the situation in Catalonia to "generate tension” and obtain electoral revenue in the rest of Spain.