The situation is similar to that of May last year, when after 83 days of negotiations, Pere Aragonès declared an agreement with Junts for his investiture to be “impossible”. 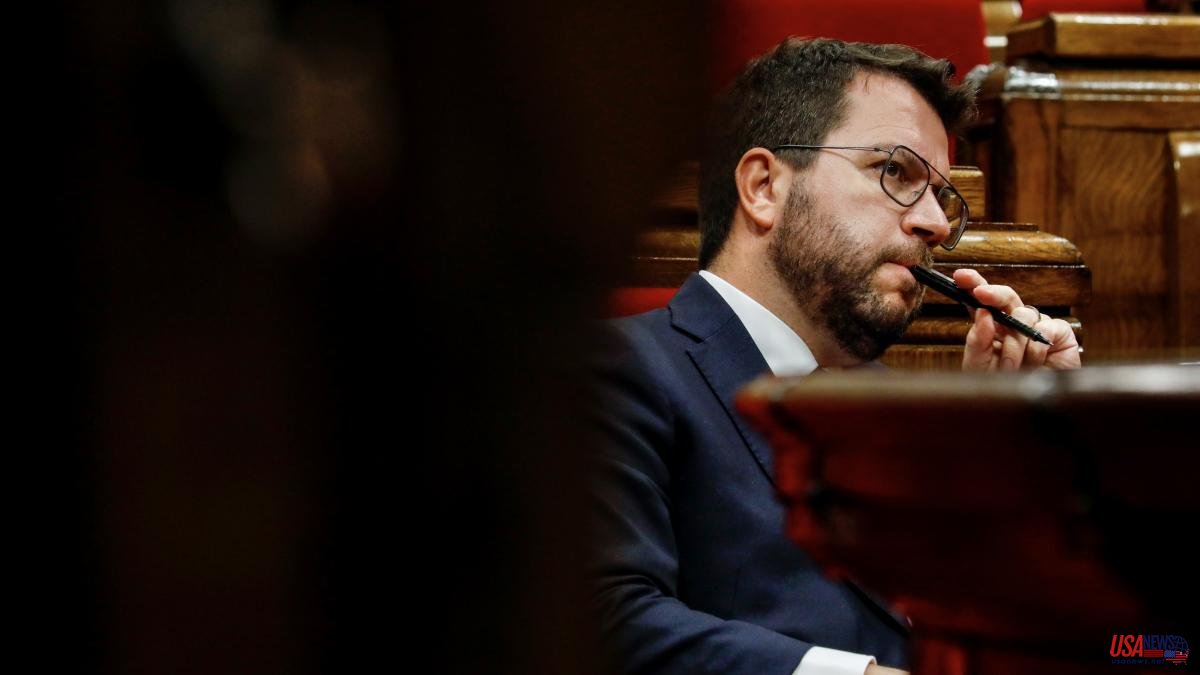 The situation is similar to that of May last year, when after 83 days of negotiations, Pere Aragonès declared an agreement with Junts for his investiture to be “impossible”. Today in Esquerra they maintain that they prefer to continue with the coalition government as it is, but given the uncertainty caused by the consultation with the Junts militancy to decide if it abandons the ship of the Catalan Executive, the president of the Generalitat is forced to prepare a plan to rule alone. If it is the case.

Aragonès urgently needs to work on the idea of ​​a new Government. There is some vertigo in ERC, but not fear: "We are prepared for whatever it takes; if we mount 1-O, we will endure the Govern", assures a senior party official. The consultation of the postconvergents ends on Friday at five in the afternoon. The provisional results will be announced shortly after, with which the head of the Catalan Cabinet will have a plan ready for sure, according to sources from the Catalan Executive, "just in case". The president has "thoughts on things", but from his surroundings they point out that a future scenario of a break with Junts could not be seriously contemplated until checking if there was progress last weekend. "Junts' proposals on Friday were rejected. Also the "resignations" on Sunday of those of Laura Borràs and Jordi Turull, sent briefly by Whatsapp around ten at night, shortly before the end of the deadline set by JxCat to arrive an agreement.

Republicans do not want elections or the president submitting to a matter of confidence. "We cannot go to an interim stage or to elections", since it would not be the best way to respond to an autumn of economic difficulties, with inflation rising by double digits, reasoned the ERC's deputy general secretary, Marta Vilalta. So if Junts stands up and leaves the Government, Esquerra and Aragonès will have to start up the machinery to restructure it. Not only in terms of names, but also in terms of possible changes in the powers of the different conselleries. Close to 300 positions between direct and indirect of Junts in the Generalitat or dependent on the Government would be likely to be replaced. If this is the case, the Republicans do not rule out that the president has Junts positions so that they retain relevant positions, as well as the incorporation of relevant people from civil society.

That ERC is prepared to govern alone was revealed by Vilalta yesterday at noon. He assured that the option of piloting the Catalan Executive without a co-pilot is planned. "It is clear that our responsibility, from the Government and from Esquerra, is to be prepared for any scenario, and therefore, also to be prepared for a supposed ERC Government alone," he stressed at a press conference, without ruling out other formulas. The commons knock at the door.

"This formula [Govern ERC-Junts] is the one we have, and we do not rule out that there may be others," stressed the Esquerra leader at a press conference from her party's headquarters. "In solitary? Could be. We would like the current Government to continue, but Junts' attitude has to change, she remarked. Vilalta, in fact, contemplates this scenario, because in his opinion JxCat has given ample evidence that "a notable part of Junts works to get out". Despite all the sticks in the wheels, he is ruling.

Esquerra is far from wishing him much luck. Republicans are bored with postconvergents. But they don't look at it from the sidelines either, because the Government and its stability depend on the result of the consultation, but also the future of Oriol Junqueras. If the militancy of JxCat decided to let it go, the Republicans would face a moment of significant uncertainty, probably at the helm of a Government alone with the least parliamentary support in the history of Catalonia: 33 deputies, it has ERC in the Parliament; in 68 is the absolute majority.

Be that as it may, the focus is now on Junts. He will ask his affiliates on Thursday and Friday about the continuity of his training in the Catalan Executive, headed by Pere Aragonès with a clear and simple question: "Do you want Junts to continue being part of the current Government of the Generalitat de Catalunya?"

The approach, in line with what is included in the political paper approved at the congress that was held in July, leaves no room for doubt or ambiguity and is positive, since it asks for continuity and not exit, although in the preamble Esquerra's breaches are denounced.

In the training executive, this issue divides one and the other, but with a left hand and Solomonic decisions, the differences have been bridged until the issue has been transferred to the associates. One of the mantras among the detractors of a referendum on the independence of Catalonia is that they divide, but the general secretary of JxCat, Jordi Turull, sees "no risk" of a break in the internal consultation, despite the fact that other actors of their space do contemplate that scenario depending on how everything goes. “My obsession is that Junts does not break. I don't see any risk”, highlighted yesterday the leader of the formation.

The party executive will remain neutral during the process and will not make a position, although all its members are free to express themselves in their spheres of influence and their environment, although there will not be an organized campaign to use. In fact, Turull assured that he, as general secretary, will not put himself in profile and that he will send the militancy what his position is, but he did not want to reveal in which direction he will vote. Although it is not conclusive, he hinted that he could defend the same position as the president of the formation, Laura Borràs, who, unlike him, has been openly in favor of the rupture.

For their part, mayors, councilors and various positions in the formation plan to publish a manifesto in favor of continuity in the Executive, which has also been defended by some ministers and the more institutional sector.

What was not clear yesterday is how Junts will leave the Government if its militants so decide, what deadlines there will be; or what the general secretary of the formation will do, in case of a result contrary to the one he defends. All this remained in the pipeline and will be revealed in the coming days.

Before presenting the query, Turull revealed yesterday that in the proposal sent to Aragonès on Friday to negotiate, in addition to requesting the reinstatement of Jordi Puigneró as Vice President of the Government, they also offered to withdraw the matter of the question of trust that Junts put on the table during the general policy debate, the germ that ended up triggering the crisis among the partners of the Catalan Executive.