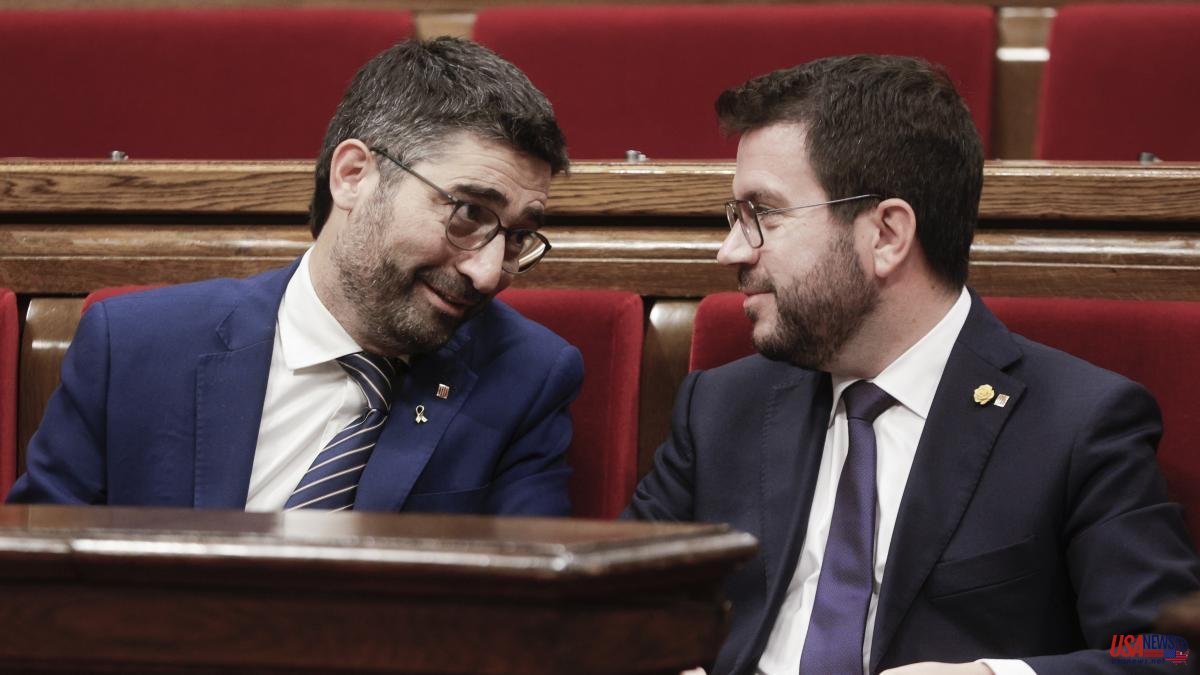 Pere Aragonès is upset. Junts per Catalunya threatened late yesterday to demand that the president of the Generalitat convene a matter of confidence if he does not comply with the investiture agreements. "Concretion and guarantees" for this, JxCat requested, and the rope has become so tight since Aragonès has suspended his scheduled agenda for today to make a decision, although the head of the Government is not willing to give rise to the stake he launched yesterday the leader of the Junts parliamentary group, Albert Batet, during the general policy debate. In any case, Aragonès considers that the approach of the postconvergents supposes de facto withdrawing confidence in the Government and the president. For this reason, the head of the Catalan Executive has summoned his ministers to Palau for an extraordinary meeting of the Consell Executiu this afternoon, which began after 5:00 p.m.

All the options are feasible and among them hovers the possibility that the president decides to break with Junts in the Government in the coming days. And more so after verifying that the "clarity agreement" that he proposed yesterday to lay the foundations for a hypothetical agreed referendum did not satisfy JxCat. Now, if the rupture occurs, Aragonès wants the post-convergents to take the step. "Those who have spoken of ultimatums or threaten with questions of trust are the ones who have to respond and decide," say Presidency sources.

The same sources point out that this afternoon's meeting responds to a situation that, in their opinion, has caused Junts. In addition, they assure that the head of the Catalan Cabinet gave a "favorable" response yesterday to the three demands of the postconvergents. They ensure that institutional respect is fundamental and that the Government is 100% dedicated to dealing with the economic and social crisis and to advancing on the national axis. The meeting will largely serve to take the pulse of the ministers of Junts.

Pere Aragonès himself, the Councilor of the Presidency, Laura Vilagrà, and Jordi Puigneró, in the ranks of JxCat and Vice President of the Government, have held several separate meetings throughout the morning, after suspending their public agendas. The contacts between parties will be after the meeting of the Executive Council and the post-convergent plan has been called this Wednesday morning in the Parliament to analyze the situation.

Waiting for the decision that the president of the Generalitat may take, in Esquerra a feeling of fatigue prevails with respect to its partners in the Government. As the party chaired by Laura Borràs has been tightening the rope, in parallel it has also increased the conviction among the Republicans that they should pilot the Catalan Executive alone. In ERC they are not willing "to solve their internal problems" and have maintained their course, which mainly involves a commitment to dialogue with the State to move towards independence and achieve an amnesty, despite JxCat's ultimatums. The words of Oriol Junqueras on September 20 are significant, when he assured that he will not change his strategy "not one millimeter." Aragonès himself showed yesterday his weariness and yesterday urged his partner in the Government to decide "quickly" whether or not he continues in the Catalan Executive. But the truth is that in JxCat they consider that "before breaking up there are other options" and Jordi Turull's training in this matter has not put deadlines in between.

In any case, before any step is taken, at least by Junts, the post-convergence militancy must make a pronouncement in a consultation that right now has no calendar or question. It will be the executive who summons her when she deems it appropriate.

JxCat pointed out yesterday that the breaches they denounce are in nuclear matters for them and training sources reason that if the strategic direction of procés, the coordination in Madrid or that the dialogue table with the central government focuses on self-determination and amnesty, in the current terms, perhaps the elections would have been repeated and there would have been no agreement.

That the distance between ERC and Junts is considerable is shown by the fact that in Parliament they have not presented any joint resolution proposal related to the procés – the parliamentary groups had time until this morning at 9:30 a.m. to do so – although they have time until tomorrow to try to transact some of our own proposals and try to redirect unity and in that aspect there is some optimism. Republicans and postconvergents, however, have agreed on 22 sectoral resolution proposals. All of them will be voted on Friday at noon in Parliament. And the previous work has gone well in the sectoral field, JxCat sources point out.

As for Junts, there is a difference of opinion. Actually, the same as before. After the threat of claiming a matter of trust from the president – ​​only Aragonès has the power to call it –, there are voices in the party that are committed to breaking with ERC. But in the Government and in the more pragmatic sector, although they share the diagnosis of the non-compliance of their partner and that this circumstance must be reversed, they do not see a break with good eyes. "To do what?" is the question they always ask. We are not in the same situation as in the tripartite era, these leaders point out, when there was a strong capillary network throughout the territory and Convergència was the party with the most votes and was displaced by the PSC, ERC and ICV entente. Now the most voted are the socialists.

In statements to Catalunya Ràdio, the leader of Junts in the Parlament, Batet, pointed out that if the president submits a matter of trust to the Catalan Chamber, it could be an "opportunity" to give "more stability" to the Government, as happened in in 2016 with Carles Puigdemont. From JxCat they assure that "very few people" from the party knew that the request for a matter of trust was going to be formulated.

The president of Junts, for her part, has affirmed in an interview with the Catalan News Agency (ACN) that there is "an erosion" of trust between partners and has questioned "why the question is not if Esquerra leaves the Government?" if it is the training that, according to him, is not fulfilling the commitments.

Be that as it may, in Junts they consider that in this general political debate, after putting the question of confidence on the table – the CUP asks for a question of confidence in a motion that will be voted on in the next plenary session, without knowing what was going to happen As Batet said yesterday, there has already been a turning point, just as they wanted, to change the dynamics and the current situation in the Government. Although the result of all this is still uncertain.

In any case, the push and pull of the last few weeks and a new escalation of tension may end up causing a scenario not desired by many. But it is not the scenario in which Junts moves. Everything in its time, they say. They believe that negotiating can redirect the situation, once again. For sample, a button. The PP asks for the question of trust in one of its debate resolutions, but Junts will not vote in favor and has not yet decided what it will do with the anti-capitalist motion.