Aragonès asks Junts to preserve the institutions of "their internal debates"

If it depends on the president of the Generalitat, the Government between ERC and Junts will continue to stand because it has been doing a good government job both internally and in the framework of political negotiation with the State. 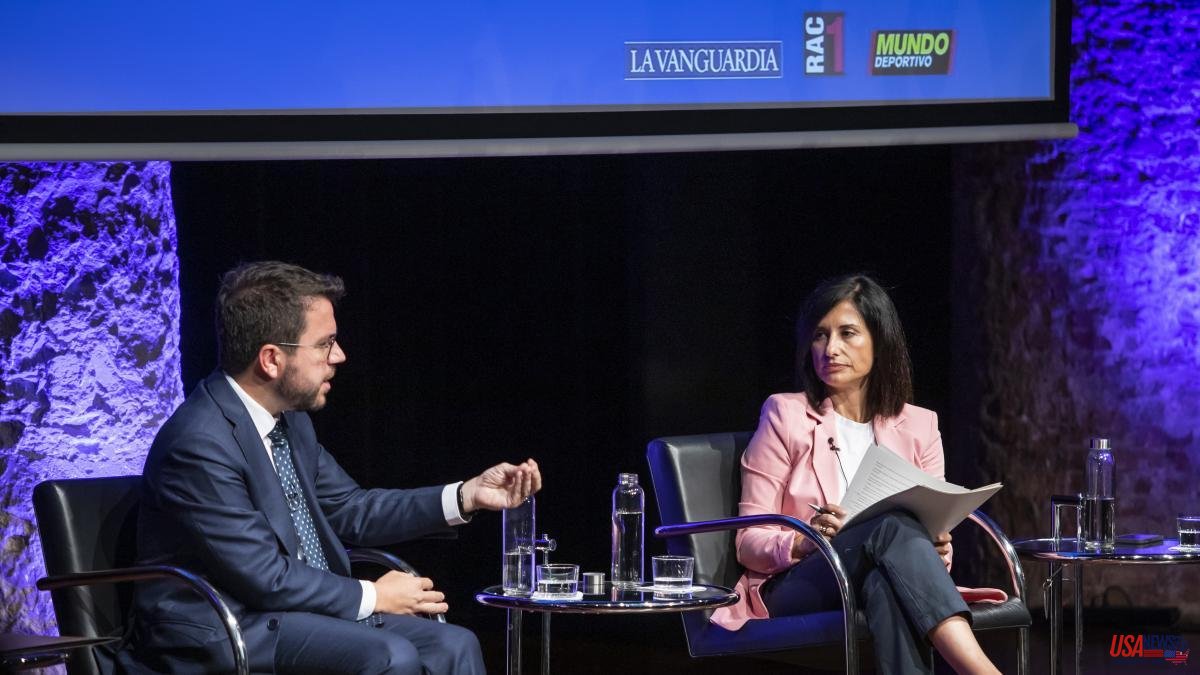 If it depends on the president of the Generalitat, the Government between ERC and Junts will continue to stand because it has been doing a good government job both internally and in the framework of political negotiation with the State. According to Pere Aragonès, the crisis that the members of his government are experiencing and which reached its climax at this Wednesday's summit in Pedralbes, should be redirected, but for this it is imperative to work "without ultimatums" and "preserving the institutions" of the " internal debates of a party": Junts.

Aragonès expressed himself in this way in a new edition of the Vanguard Forums cycle, held in the La Pedrera auditorium in Barcelona and sponsored by Indra and Correos. Under the title, 'Catalonia, country of progressives', the president gave a conference in which he put forward the pragmatism that the moment of economic crisis demands against proposals "that are formulated in 48 hours and that have no options to advance" , in reference to the approach of the Catalan National Assembly (ANC), which calls for the independence of Catalonia for the second half of 2023

The president considers that "at this time we have to be focused on solving the problems of the citizenry", so that "if it depends on me" the horizon is "to finish the legislature", in 2025. In fact, he sees reasons to continue with the government coalition, since the confidence in all the members of the Government "is intact, like the first day". The problem is not in the Government, but in Junts, he has come to say, that is why he has limited the crisis unleashed in recent hours to the "debate within a political formation", which "I hope they are resolved", he has wished.

"There are internal debates in all formations and it is good that they are clarified. But we must preserve the institutions" and "work positively without ultimatums, reinforcing the Government", he claimed.

Aragonès has reduced the dispute with his partner to the fight for the leadership of the independence cause, which he rejects. "We don't have to discuss who's in charge, but rather what we're doing," he pointed out. That's why he would like "the mobilizations to squeeze the other party" because "arguing about who's in charge if we don't know what or how will only produce more struggle" , has warned

On the contrary, the president has valued the priorities set by the government plan, such as "forcing the State to negotiate" and has valued having achieved in this way that the Government recognizes that there is a political conflict.

Without wishing to contribute "to the noise" of the last hours, the president has emphasized the good functioning of his Executive and its achievements, among which he has mentioned the approval of the 2022 budgets in a timely manner and the broad agreements to unlock some institutions that remained unrenovated. A government action that, in his opinion, also has a positive impact on the independence cause because it gives meaning to self-government institutions that other nations without a State do not have and find it more difficult to advance.

On the other hand, Aragonès has refuted the ANC's proposal to proclaim independence next year, among other things because "none of the political formations of the Government consider it real" that independence can be proclaimed then. "Out of responsibility, I will not feed a proposal that is formulated in 48 hours, that has no options to advance and that would produce more frustration if we give it a charter of nature", he has rejected.

In his opinion, setting specific dates "does not help us move forward", and "it is not because you are in a hurry that you arrive earlier". On the other hand, "political projects advance when they do not speak of themselves, but of the entire country", he has resolved. His plan is "the broadest path", the one that arouses the "greatest support internally" and internationally, with which he guaranteed that "Catalonia will vote and will be an independent State.

Several members of the Government of Junts also attended the conference, such as the vice-president Jordi Puigneró or the Minister of Justice Lourdes Ciuró, and the president of the post-convergence parliamentary group, Albert Batet. In addition, Aragonès was surrounded by leaders and councilors of his party, such as the Presidency, Laura Vilagrà; the one for Business, Roger Torrent, and the one for Agriculture, Teresa Jordà, and the president of the parliamentary group Josep Maria Jové.