He had barely been on the field for a moment when Luis Suárez left him a ball on the edge of the field. 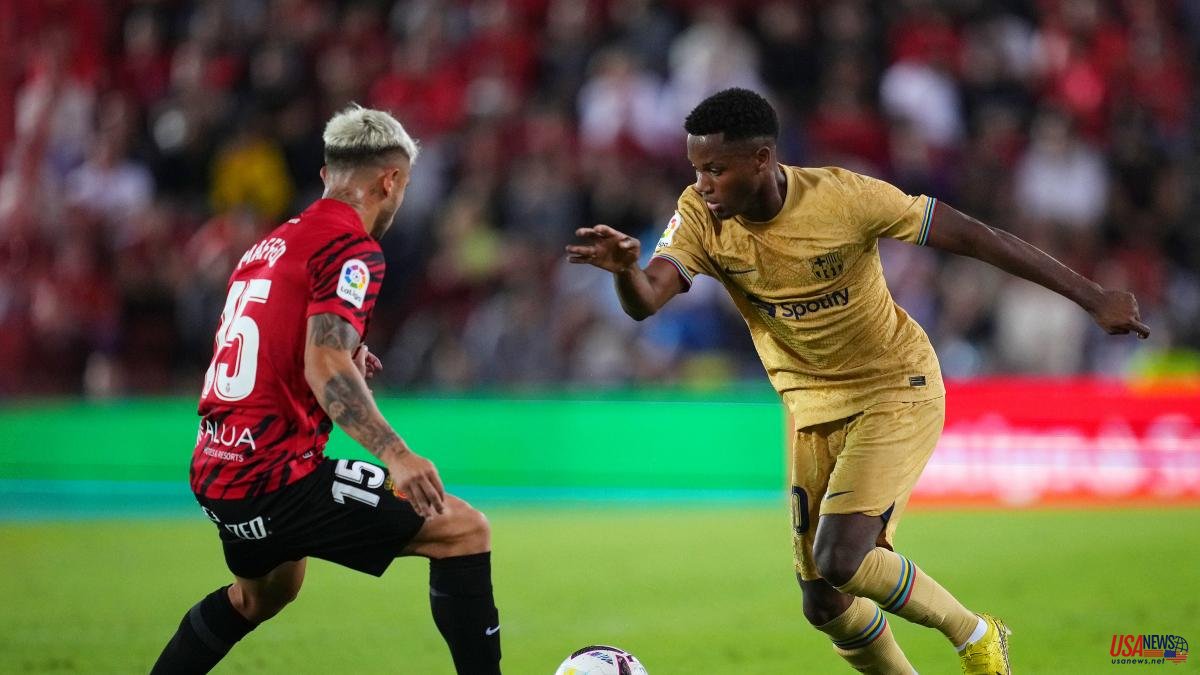 He had barely been on the field for a moment when Luis Suárez left him a ball on the edge of the field. The boy didn't think twice and beat Handanovic with a cross shot. It was the 86th minute at the Giuseppe Meazza and that creature responded by the name and surname of Ansu Fati. With the electricity that accompanied him, he had just given Barça the victory and became the youngest to score in the Champions League. December 10, 2019. Almost three years later, the striker returns to Milan to face Inter again in Europe's top competition. He still holds that record and is not yet 20 but has since changed his career. From the supersonic boy, he has become an attacker who does not finish starting, a dark point and who pursues his return to the highest level.

In Mallorca, on Saturday, Xavi gave him a new opportunity. His second start of the season and Fati was not satisfied. When a ball escaped him over the baseline, shortly before being substituted, he angrily slammed it into the fence in frustration. An image that reflected his mood. In the times of his advent he always wore a smile that revitalized a dying Barça, but today it is the team and Xavi who must help him.

He has shown a good understanding with Lewandowski, who acts as the father of all, and has scored two goals, in San Sebastián and Cádiz, but he still has a long way to go. He has participated in all the games as part of Xavi's plan to go slowly but surely. Because what he needs is competitive pace and, above all, confidence. Dare and let go. From Barça he insists that he is medically recovered after a journey of injuries. First one of the meniscus that had him standing for more than 300 days after relapse and then two muscle tears. After the last one, already with Xavi at the club and with Dr. Pruna back at the Camp Nou, it was suggested that he go to Finland to undergo surgery, as did Dembélé, Sergi Roberto and, last week, Araújo. He, panicking about going back into the operating room, preferred a conservative path, backed by his representative, Jorge Mendes, and by his father, Bori.

In Madrid, he put himself in the hands of the physiotherapist Jorge Juan, who had worked with Pau Gasol and Cristiano Ronaldo, and listened to the advice of the Portuguese federation doctor, José Carlos Noronha. Barça was understanding, but Ansu can't find a way to express himself one hundred percent. He has not played a full game and has only started ten times in the League in three seasons.

Too many interruptions in full growth. Fati needs to reinvent himself. Luis Enrique does not see him prepared for the World Cup and Xavi says that he has rebelled against his not being called up for the Spanish team. In the last two weeks he has been working specifically on top speed. It is one of the things that is missing, that gear change. The GPS data that monitors Barça's matches and training sessions says so, but he wouldn't be necessary. A simple glance proves it. In spite of everything, his idyll with the goal is intuited that remains intact and in addition to getting a pair he has directly participated in three others. Cold statistics say that he has contributed to a Barcelona goal every 43 minutes but what he has to recover is the spark that made him an angel. Today he is not expected to be in the eleven but he was not a starter in 2019 either. Who knows if he is experiencing a new beginning in Milan.