The Netherlands has always been renowned for its football, but it has not been a land that has produced great goalkeepers, with the possible exception of Edwin Van de Sar, with three World Cups behind him and a long international career with Ajax, Juventus and Manchester United. 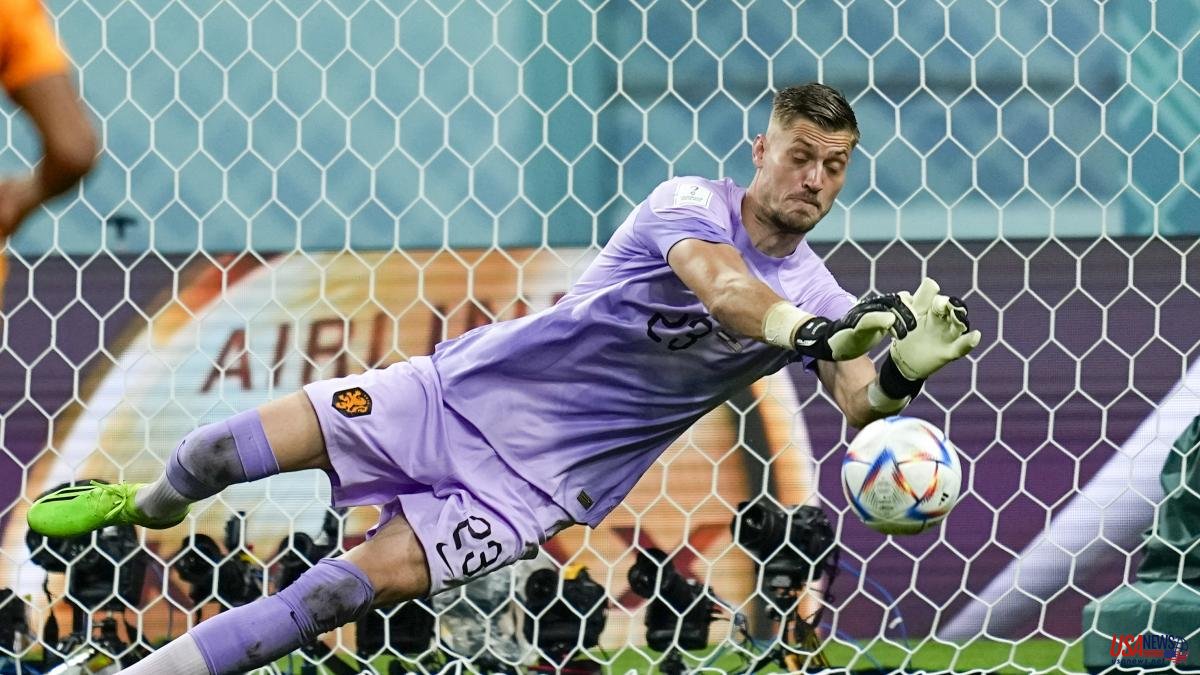 The Netherlands has always been renowned for its football, but it has not been a land that has produced great goalkeepers, with the possible exception of Edwin Van de Sar, with three World Cups behind him and a long international career with Ajax, Juventus and Manchester United. For this World Cup, Andries Noppert has been the surprise on Van Gaal's list. At 28 years old, with 2.03 centimeters he is the tallest in the tournament, the goalkeeper has very little experience as a professional after a career hampered by injuries.

Van Gaal left ex-Barcelona player Jasper Cillesen, now at Nijmegen, out of the squad and has brought in veteran Ajax goalkeeper Remko Pasveer, 39, as the second goalkeeper.

Noppert has arrived in Qatar as Heerenveen's goalkeeper and on his resume he can only boast of having previously gone through NAC Breda, Dordecht and Go Ahead Eagles, as well as a loan to Foggia of the Italian Serie B. In total, he has played 45 matches as a professional, 32 of them in the Eredivisei.

How could it be otherwise, Noppert's story is a story of tenacity and improvement. Starter in all three Oranje games in Qatar, the goalkeeper was about to leave football three years ago. He himself admits it in some statements in the media of his country in the concentration prior to the World Cup: "At 25 years old and several serious back injuries, I considered giving up football. My wife thought that becoming a police officer was the best option for me. ... But I don't. We argued a lot about it. I just said: I'll fight until the end. I'm glad I listened to myself," he said.

Noppert did not have it easy. In the Go Ahead Eagles he spent his first season blank (in the second division), but started the last fifteen of his second season, already in the Eredivisie. That earned him Heerenveen, where he has started in all fourteen games this season, crucial information for Van Gaal to recruit him for Qatar.

Noppert's time in Qatar until today's game had been solvent. In the group stage he only conceded one goal, that of Enner Valencia in the draw against Ecuador.

But against the United States the goalkeeper has taken decisive actions. After three minutes he kicked out a one-on-one shot with Pulisic that would have put his team behind on the scoreboard. At 41 he avoided the equalizer in a very hard shot from Weah from outside the area. Noppert was not very successful in the goal for the United States, at 75, a very unorthodox shot from Wright that caught him in the wrong position.

However, no one can deny that the goal does not tarnish Noppert's good World Cup. The Netherlands has a goalkeeper, although he does not play in a team among the greats of the continent and is a perfect stranger to most.