Andrei Kureichik: "If Ukraine wins, it will give hope to Belarus and the entire region"

There are more than a thousand recognized political prisoners in my country. 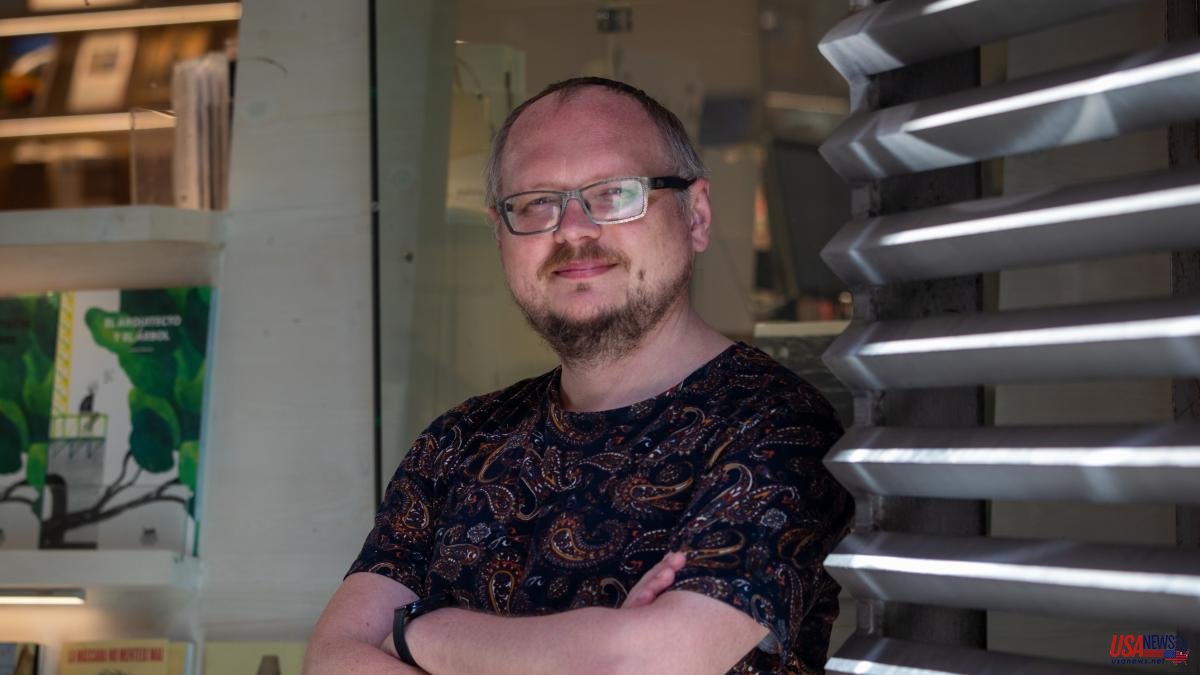 There are more than a thousand recognized political prisoners in my country. But there are many more. Let's not forget them”, begs Andrei Kureichik. Until 2020, the Belarusian screenwriter, playwright, director and publicist enjoyed success and recognition in his country and abroad. His works had been performed all over the world and institutions recognized him as one of the most prestigious creators in Belarus. "But it's not about money or prosperity," he explains. In 2020 he joined the opposition Coordination Council after the fraud of the presidential elections. He today lives in exile in Helsinki and has received death threats from the Lukashenko regime. Kureichik visited Barcelona invited by the CCCB on the occasion of Orwell Day.

He recently received death threats. How has the war in Ukraine affected her situation?

In 2020, after 27 years of dictatorship, the people took to the streets to fight for their rights and defend their vote, and the people of culture were at the forefront. Theater people, writers, Nobel laureates like Svetlana Alexievich and many others. Many were imprisoned and are still there, like Ales Pushkin. Most were expelled from the country, like me. I had to go to Ukraine. I then accepted the offer to become artist in residence at Artist at Risk and moved to Helsinki. A year ago, the democratic forces tried to meet and almost all received threats. I changed apartments with my son and I am trying to be very careful, to understand that Lukashenko will seek revenge by all means.

What has happened to your family?

They are still in the country. When I left, I thought I would be back in weeks or months. It seemed that the people would be able to bring down the regime, we did not know that Lukashenko had so much support from Putin or that Belarus would be part of this war. We had other hopes. So I took a backpack and went to Ukraine. When it became clear that it would not be possible to return, I began to plan how to get my family out. But Lukashenko hijacked that Ryanair plane, after which no flight from Belarus was allowed. Also, due to the pandemic, the border was closed. I was lucky because my son had the necessary documents to leave, but the rest of the family did not. It was impossible to fix it because the embassies were closed. I hope that this year we will have more luck, but due to the war everything has been complicated. The focus of attention is on Ukraine and it is much more difficult to be heard in the world. We are a half-occupied country. Lukashenko has become a colonel for Putin and our enemies are stronger. But as long as the people in Ukraine continue to stand up to them, there is hope. If they succeed, and we believe they will, this military machine will break and give hope to Belarus, Moldova and other countries in the region.

There are two Belarussians, that of the regime, which supports Putin, and that of the sabotage and volunteer battalions in Ukraine. Do they feel part of the same conflict?

The 2020 elections revealed that between 67 and 70% of the country did not support Lukashenko. The majority of Belarusians is against the war. There are activists trying to help Ukraine. There are those who have military experience and help in the army, others carry out cyberattacks, there are volunteers who raise money for drones, medical supplies... During the first weeks of the Russian aggression, many people sabotage the railways. Now, unfortunately, they are in jail

He is one of the most prestigious creators in his country, although he was never considered a political artist. What made you change?

I was quite successful. He was a screenwriter, film director, theater producer, writer... From the point of view of economic prosperity, everything was good. But others more prosperous than me ended up in jail. It is not about money or personal prosperity, it is a matter of strategic choice of country. Lukashenko was going to sell the country to Russia, to destroy Belarusian independence, its Europeanness. It was the same thing that happened in Ukraine in 2014, the idea was the same, although they were more successful. We feel European, much closer to Poland or Lithuania than to Putin's Russia.

The cultural elite is fleeing from both Russia and Belarus. What is the cost that their companies will pay for their absence?

Art is more than art. When you provide freedom of expression you become an enemy, because the system wants you to think like them, they want you to feel like them, and art always expands freedom. But if you make political art on top of that, you become the most dangerous enemy. And there is another problem: in Europe artists who have left Russia are not welcome. I don't know if it's good to punish anti-Putin Russia, they fight with the Ukrainians. We have to support them, them and the political prisoners. Because they are the leaders of the future and when they are released the situation will change in Russia and Belarus. Europe needs to do more to free opposition leaders. They could lead to revolution.