The balance of the first year of operation of the air connection between Andorra and Madrid has been very positive. 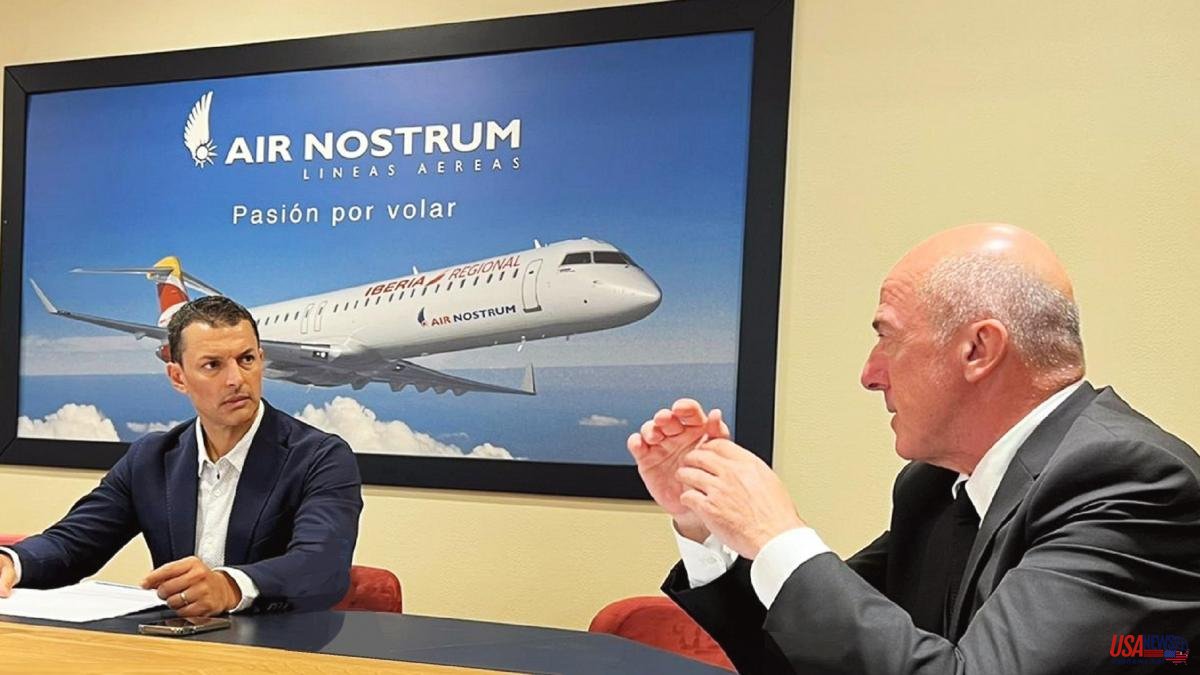 The balance of the first year of operation of the air connection between Andorra and Madrid has been very positive. The average occupancy of the flights has risen to 52%. This volume of occupancy, together with the improvements that are expected at the Andorra-La Seu airport and the growing demand from the business sector, suggests the need to "work for the idea of ​​also having a flight during the week", according to affirmed the Minister of the Presidency, Economy and Business of Andorra, Jordi Gallardo. Currently, flights take place on Fridays and Sundays.

The analysis of the first year of activity in the air connection, in charge of Air Nostrum, took place during the meeting in Valencia between Gallardo and the general director of the subsidiary airline of Iberia, Juan Corral. Both parties highlighted the positive aspects of the initiative, taking into account that it is the first regular connection from the Pyrenean airport.

"We are facing the launch of the company's most successful air route, with the complexity of not only implementing an air route, but also starting up an entire airport infrastructure," said the Andorran minister. For him, the 52% average occupancy rate in the first six months of flights “demonstrates Andorra's ability to attract Spanish tourism”. For this reason, and due to the business needs that have been detected, "introducing a third interweekly connection with Madrid seems the next natural step, apart from promoting other connections with new destinations", added Gallardo. Andorra has been analyzing the idea of ​​connecting La Seu airport with other European capitals such as Paris, Lisbon and London for some time.

Of all the months in which the connection has been in operation, February was the one that recorded the best line occupancy data, since it reached 60%. Ski tourism had its weight in this occupation. March, with 55%, was the next month with the highest number of passengers on flights. Most opted for round trips and made both trips in the same week.

Regarding the connections that can be carried out during summer time, the route allows connecting with 66 destinations. Of these, 17 are national, 36 medium-haul and 13 long-haul.

The only offer that has been presented for the development of the Andorran National Heliport on the Caubella land, the one led by the joint venture made up of Helinord and Heliand, is already in the public information phase. The Minister of the Presidency, Economy and Business, Jordi Gallardo, and the Secretary of State for Economy, Eric Bartolomé, have presented the calendar related to the contest.

The first phase has been completed and will now be submitted to public information. This second phase, which will last one month, includes the request for clarifications, observations or improvement proposals, both for the feasibility study of the infrastructure and for its preliminary project and for the environmental assessment. Once completed, the project will be modified, if necessary, and the proposal will be assessed again before the final award. Gallardo recalled that, once awarded, and before the concession contract is signed, the National Project of Interest (PIN) must be declared.

The project meets the minimum requirements established "and fits in with the objectives set by the Government of having a publicly owned infrastructure for current and future needs," according to Gallardo. The UTE proposal includes a change of location within the same plot that will allow the runway to be moved away from the area closest to the Pal-Arinsal station. "The proposal presents substantial improvements with respect to the specifications that will allow, in the event of a definitive award, finally having a necessary infrastructure that has been difficult to promote in the country for so many years," Gallardo said.

The project includes an expandable 100 × 20 meter main runway, an additional runway dedicated to emergency medical and rescue flights, three paved parking positions and a hangar of more than 800 square meters. The proposal prioritizes safety and adaptation to international standards and is adaptable to future means of transport not yet certified (eVTOL). There will also be a terminal and commercial building. The concession is for 30 years.