Andoni Ortuzar: "The Basque Country and Catalonia could go hand in hand in the next legislature"

The Basque Nationalist Party is one of the mainstays of the Spanish political moment. 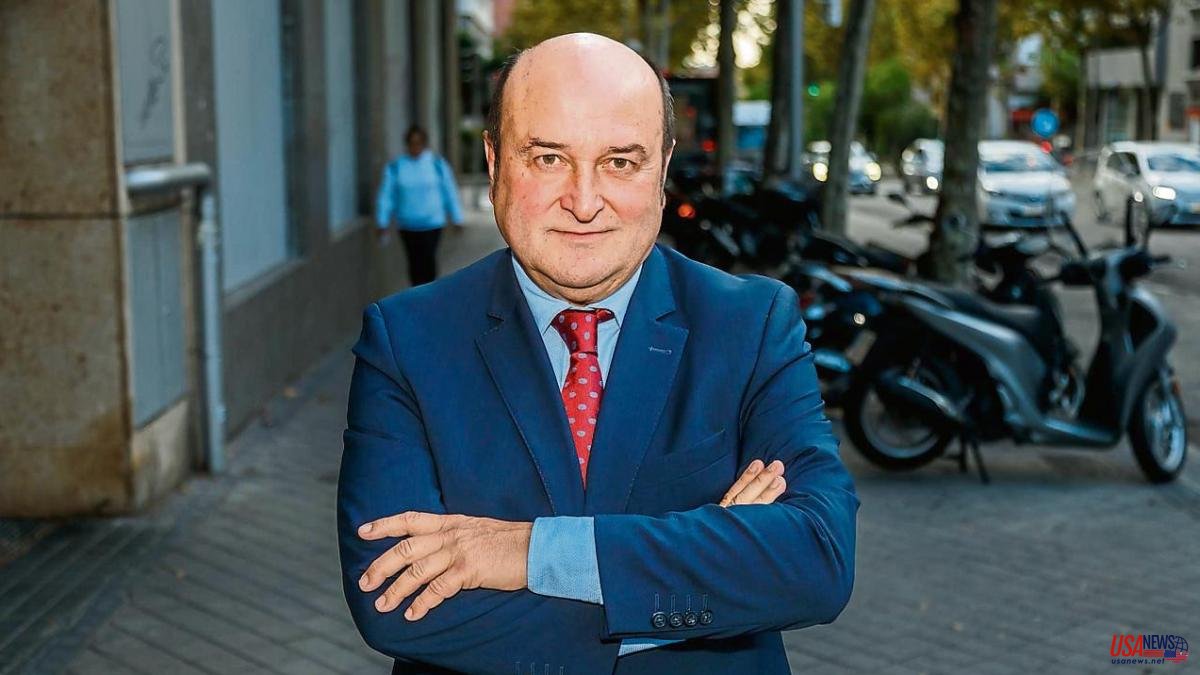 The Basque Nationalist Party is one of the mainstays of the Spanish political moment. Because of its location in the current parliamentary majority and because of the siren songs that are beginning to reach it from the other shore. La Vanguardia has spoken this week with the president of Euskadi Buru Batzar, Andoni Ortuzar (Abando, Bizkaia, 1962). The interview took place on Wednesday in Madrid and was completed yesterday in light of recent events.

The agonizing negotiations for the renewal of the General Council of the Judiciary have just been abruptly broken off. What do you think?

Spanish politics moves in a degree of total immaturity. He is not of the legal age that is needed to know how to manage conflicts and seek solutions to entrenched problems. The blame may be spread. This matter has been handled painfully. There is a judicialization of politics and a politicization of justice that have led us to this blockade. I don't know if an agreement can be reached in the remainder of the legislature. Both sides know that the PNV has never been part of the problem. If you need us, we will always be ready to listen to you.

Alberto Núñez Feijóo hides behind the PSOE initiative to review the crime of sedition, seeking an agreement with the Esquerra Republicana. On Tuesday, the Genoa PP said that both issues were going their separate ways. On Thursday, the two lanes crossed at Genoa. Will the PNV support this reform of the Penal Code?

Look, in Catalonia you have to close wounds. The procés has left many open wounds in Catalonia, within society and in the relationship between Catalonia and the Spanish powers. For a wound to close, it must be healed from the depths. A series of legislative changes would be good to make possible the return of people who are currently in exile, to avoid convictions or lift disqualifications from practicing politics. We welcome these requests, which are not only from ERC, but from the entire Catalan sovereignist world. We have to look to the future and those who govern in Madrid should not think: well, we closed the sedition thing and we forget everything else. No, you have to go to the bottom.

What you propose, a thorough reformulation of the question of Catalonia, can no longer be resolved in this legislature. And in the next one you will surely propose the reform of the Basque Statute. Can the folders of Catalonia and Euskadi be crossed in the next legislature?

We have constitutional and legal mechanisms different from those of Catalonia. I refer to the additional provision of the Constitution on historical rights. We would not mind converging with Catalonia on the issue of self-government, from the political dialogue. The State must respond to the Catalan question and the Basque question, I insist from the dialogue. The Basque Country and Catalonia could go hand in hand, under the motto of dialogue. Why not? The right time would be the next legislature, if the conditions are right for it.

The PNV has always followed Catalan politics closely. How do you see the peculiar moment in Catalonia?

Well, we see Catalan politics with great respect, but also from a distance. It's not that I want to hide, but I want to make both concepts clear: respect and distance. Having said this, I believe that Catalonia will have to go to a greater clarification of the electoral spaces. Not now, with municipal elections looming; later. Basques and Catalans like mushrooms. Now is the time for bolets and as you know, you have to know how to see the chanterelles among the litter. Catalonia surely needs to separate the substantive from the litter. Xabier Arzalluz [president of the Euskadi Buru Batzar between 1987 and 2004] used to say that there are two ways to climb the mountain: in a straight line and turning around. The straight line is supposed to be the fastest, but most mountaineers stop halfway. Going around is slower, but it allows you to reach the top in good shape. The PNV opts for this second path.

And what summit is the PNV pursuing?

Be less dependent. Build sovereignty on the basis of becoming less dependent, without losing sight of the fact that we live in a time of interdependence, as we are seeing now with the energy problem. Not even Germany is independent!

What will the reform of the Basque Statute consist of?

The Basque is the only Statute of autonomy that has not been modified in Spain. We would like to promote a reform that will repeat and even expand the level of consensus reached in 1979. A new suit adapted to current times. We have established four large areas of work. National recognition. Clarify and protect the political and economic power recognized by the Constitution, so that it cannot be deteriorated and eroded by organic laws. We must establish how conflicts related to the exercise of autonomy are resolved. The experience of these years has been disastrous. The Spanish Judiciary does not serve to resolve territorially based conflicts between Euskadi and the Spanish State. A new referee is needed, a new area, to which the Lehendakari Iñigo Urkullu has recently referred. And the fourth area refers to the decision-making capacity so that Basque society can decide its future at each historical moment, in an agreed, dialogued and respectful manner with the legal system. We are working on that. There is a paper in the Basque Parliament and we intend to reach the maximum possible consensus. We would like Bildu to join that consensus, we would like to have the Socialist Party and we would not like to lose United We Can, which today represents what the Communist Party was in 1979. Then we would have to go to negotiate in Madrid.

A good time could be during the first half of 2024, if the political conditions for it are met.

You have just agreed on something important in Madrid: the extension of the method for calculating the Basque quota. Could you explain the scope of that agreement?

We have agreed to consolidate the concert system. A pact that gives us stability and economic certainty. The current method of calculating the quota is extended for another five years. It is important for the Basque economy to have a stable horizon.

They have also just obtained the recognition of their own Basque pelota and surfing teams, without breaking Spain. The day that a Catalan roller hockey team played an international competition, in 2004, in Madrid it seemed that the world was going to collapse.

If Spain had to be broken by a Basque pelota team or by a Catalan hockey team, we would be talking about a fake state. In the United Kingdom there are five football and rugby teams and nothing happens.

I would like to go back to the beginning of the interview. How is the relationship between the PNV and the PP at the moment? You have met this week with Alberto Núñez Feijóo, one day before he broke off the negotiations on the CGPJ.

It was a meeting that we had pending. It was correct, cordial and we confirmed our differences. We were not the ones who hibernated relations after the 2018 motion of censure. We speak normally with all the parties in the parliamentary arch, we are an institutional party. We believe in institutions, in democracy and in civilized relations between political forces. But I'll tell you something else: I don't see the Basque Nationalist Party swerving at the moment. Very strange things would have to happen, very strange, for us to swerve to the right. The PNV is not preparing any swerve. In Madrid sometimes the imagination runs more than necessary.