And the two Spains cried Manolete...

For the first time since the end of the Civil War, the two Spains shared mourning on August 29, 1947 when the news spread: Manolete has died. 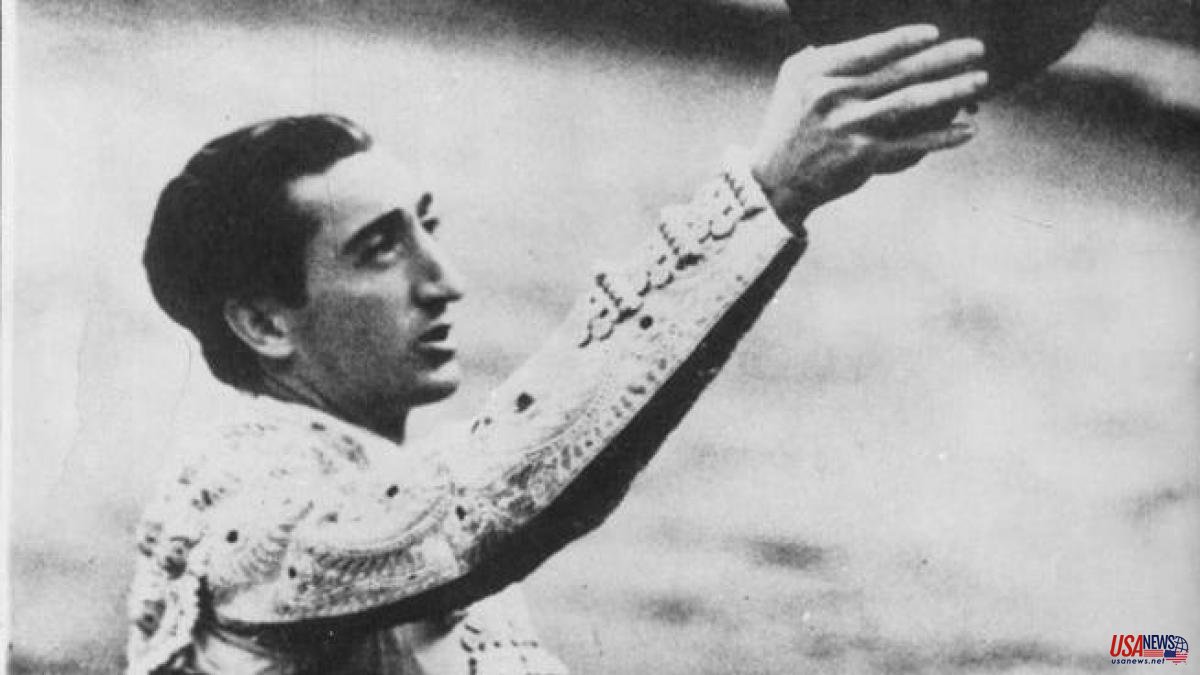 For the first time since the end of the Civil War, the two Spains shared mourning on August 29, 1947 when the news spread: Manolete has died.

He was 30 years old, with a large fortune and a blue Buick imported from Mexico. Also a mother as God commands, Doña Angustias, and a "cursed" lover, the actress Lupe Sino, who was denied access by the Praetorian Guard to the gloomy room of the Linares hospital where she lay dying after the serious goring the day before, 28 August, from Islero, a Miura of 495 kilos, bragado black, the most famous animal in the history of Spain.

And even today, the question remains: who killed Manolete? Islero, the public, medical inexperience, the conflict of a love contrary to the morals of the time?

For once, mourning and crying were not on sides. That man from Cordoba who hardly smiled, fatherless since he was five years old, with a serious face and static bullfighting, was the figure to forget a war or post-war miseries. The first idol of the masses that transcended the reds and Francoists.

A hoax attributed to Manuel Rodríguez Manolete a role in the massacre of Republicans in Badajoz. The war caught him in the Franco zone, that was all. And when he was able to make his debut in Mexico –in 1945- he had no qualms, on the contrary, about meeting with the exiles. He established a good relationship with the socialist Indalecio Prieto, to whom he dedicated a photograph -some sources speak of a fan- with the dedication: "From Spanish to Spanish." And at one of those lunches, the exiled professor Antonio Jaén Morente – who in his native Córdoba had just been named... “cursed son!” – concluded that “Manolete dignified us all”. He did not treat them as enemies but as fraternal victims of the same tragedy.

"I send myself," he once said, fed up with criticism and gossip, months before the fatal goring in Linares, a third-class place to which he arrived very tired, weak and eager for the end of a season in which the demand of a sector of the public rose to cruel heights. He managed to collect 250,000 pesetas per evening –a fortune– and agreed to deal with the demanding Miuras in Linares because Mr. Pedro Balañá was managing the bullring for the first year, an extension of his Barcelona empire, where he did the paseíllo most times (70 evenings, 25 in Madrid).

The unprovable legend insinuates an exhausted hero who seeks death and with it rise to myth. "He was fatalistically waiting for death, on his feet, selflessly," said the rejoneadora Conchita Cintrón, after seeing him fight in Lisbon.

All those present in Linares agree that he went in to kill the fifth in the afternoon with a reckless slowness that could only lead to a serious goring. That's how it went. Two trajectories and shattered veins. A deadly hug. And an atrocious agony in the hospital of the Marqueses de Linares. The mobilization is total. The surgeon from the Plaza de Madrid, Jiménez Guinea, will arrive at dawn with a plasma of which we will never know if, due to his possible poor condition, he hastened death, at five in the morning. Only then did Lupe Sino, who had run from the Lanjarón spa and waited for hours in the waiting room, be allowed access to the bed. There was talk of the fear of a possible marriage in rigor mortis –and inheriting the bullfighter's fortune– or the extreme unction received and preventing him from incurring in sin. The executors –Álvaro Domecq and attorney Camará– alleged that Manolete never asked about Antonia –that's what she called Lupe Sino, surnamed Bronchalo–, unlike her mother. “What an upset you are going to have”, they attribute to him before the last “Doctor, I don't see”.

Thirty years and an intense life, which the French director Abel Gance wanted to film in 1944 (there are minutes of the footage, which reinforce the enigmatic nature of Manolete). A hero of the people whom the public itself martyrs. “His art is sad, without joy”, certified Néstor Luján, great manoletista. Linares' great rival in the afternoon, the thriving Luis Miguel Dominguín, father of Miguel Bosé, explains that they shared a cigarette at the Cervantes hotel, where he announced his desire to retire at the end of the season: "You will be the most affected because you will inherit my enemies.”

Winston Churchill sent a telegram of condolences to Doña Angustias on October 10, 1947. The epistolary relationship goes back a long way. The rancher José María Escobar, an Anglophile, sent to the premier in 1946 the stuffed head of the Perdigón bull, stabbed by Manolete, since he had a white V-shaped spot on his forehead. The famous V for victory. On May 29, 1946, Churchill sends a telegram to the bullfighter thanking him for the gift and concluding: "Please accept my congratulations on the happy outcome of what must have been a demanding fight."

“Perhaps I have known four or five people in my life who were great men. One of them was Manolete, wrote Orson Welles. On one occasion (in the US) we went to a restaurant where no one had heard of bullfighting, much less Manolete. We walked in, he was just a few steps ahead, and no one noticed me even though I was a movie star at the time. Instead, everyone looked at him."