And finally, the world at your feet

Rarely has the world of football united with a single cry. 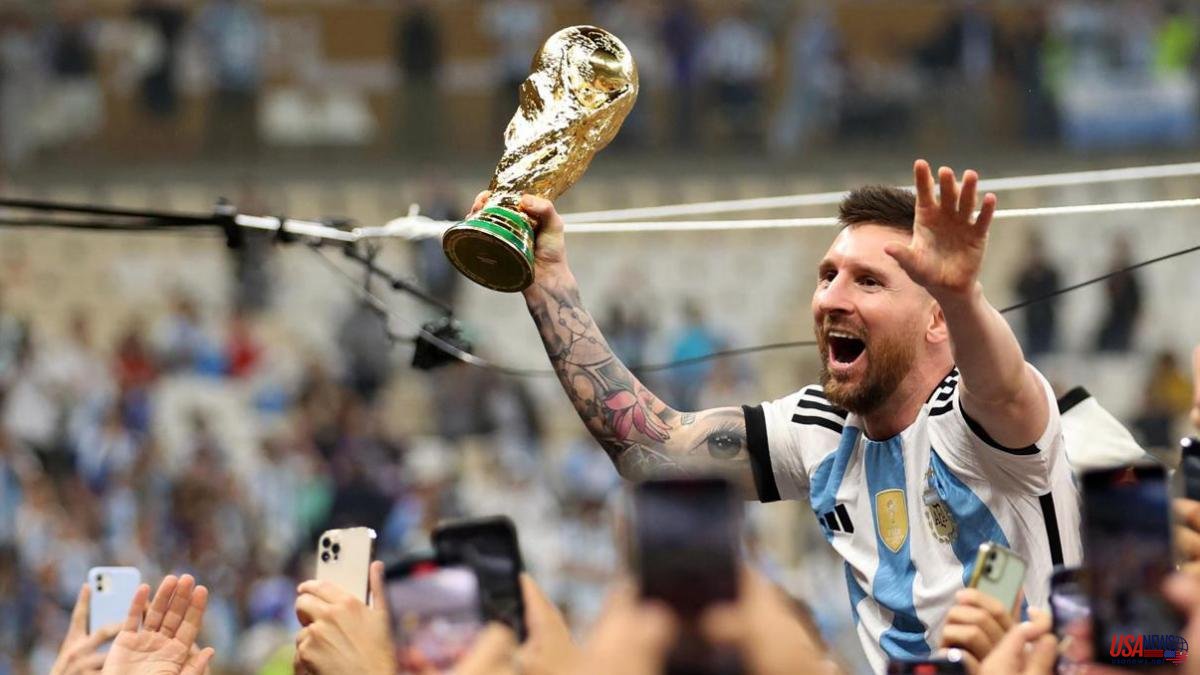 Rarely has the world of football united with a single cry. The planet was in a great clamor. It seemed that all the fans wanted the same thing. Argentina was the favorite in the hearts for the World Cup final in Qatar. Obviously, there were exceptions. The Gauls from the village of Asterix were the French led by Mbappé and they aspired to retain the title. But the popular desire was for the title to go to the albiceleste. And it was like that because Leo Messi played there. Actually, they all banked the number 10 and Argentine captain. There was no better ending to his extraordinary career. It was the prize he was missing, the only trophy that had resisted him in his 18 years as a professional, the stone with which he had already stumbled four times. Glory had been elusive to him in 2014 and lifting the Cup was leaving those who did not want to see that he was already on Olympus without arguments. It was his ticket to eternity.

Poetic justice, they call it.

But the truth is that the World Cup did not start well. It had not been the path of roses that some had expected. On November 22, at the same Lusail stadium where the final was played 26 days later, Argentina lost against Saudi Arabia, number 51 in the FIFA ranking. The 1-2 was a world shock. Early in the second half, Al Shehri and Al Dawsari turned around Messi's opening goal, from a penalty. There were more than 35 minutes to go, but the favorites didn't react and their infamous streak of 36 games without losing went to hell. After the Saudi comeback, the ghosts revived and few believed that Argentina would achieve it.

But suddenly, and against all odds, the pieces began to fit. Scaloni was brave and intervened. The young people were entering the eleven. First Mac Allister. After Enzo Fernandez. The last Julián Álvarez, who took out Lautaro and nobody moved him anymore. But above all, Messi appeared with unusual fury, as he has rarely been seen. He was the leader, pulled the strings, took responsibility and led the team masterfully. All this at the age of 35, ten more than Maradona at his zenith in the 1986 World Cup in Mexico, the one that mythologized him.

From his hand, Argentina was planted in the final. He opened the scoring against Mexico in the most tense game with a superb left-footed shot, he repeated it against Australia, he showed his most hidden face after scoring and after eliminating the Netherlands facing Van Gaal and Weghorst with his unique "What are you looking at, silly? Go there ”and he shone against Croatia by dancing to the impeccable and young Gvardiol in the third goal. But the best was yet to come.

It was not a great World Cup in terms of play as it was supposed to be played in November and December, with the players in full force and not as tired as in July, but perhaps one of the best finals in history was seen.

France, which had already had to overcome injuries, before or during the tournament, to Pogba, Kanté, Nkunku, Benzema and Lucas Hernández, and the threat of the camel virus, managed to equalize the 2-0 that Argentina had achieved in 70 minutes of clear mastery. In extra time, Messi scored again and forced Mbappé to score a hat-trick to force the penalties that would end up elevating the albiceleste and, above all, their captain. On ten, after winning hearts by breaking records (nobody has more matches in a World Cup -26- nor more minutes played -2,314-, no Argentine footballer has celebrated more goals in a World Cup -13-, no star has scored more times the first goal –8– and being the first to score in the group stage, round of 16, quarterfinals, semifinals and the final) he had the world at his feet. Also to the Argentines who irrationally demanded that title. Whether it was necessary or not, no one can use the name of Messi in vain anymore.