An injured Capitol Police officer on Jan. 6 recalls the chaos, carnage and confusion.

On Thursday night, the House panel heard from Caroline Edwards (U. 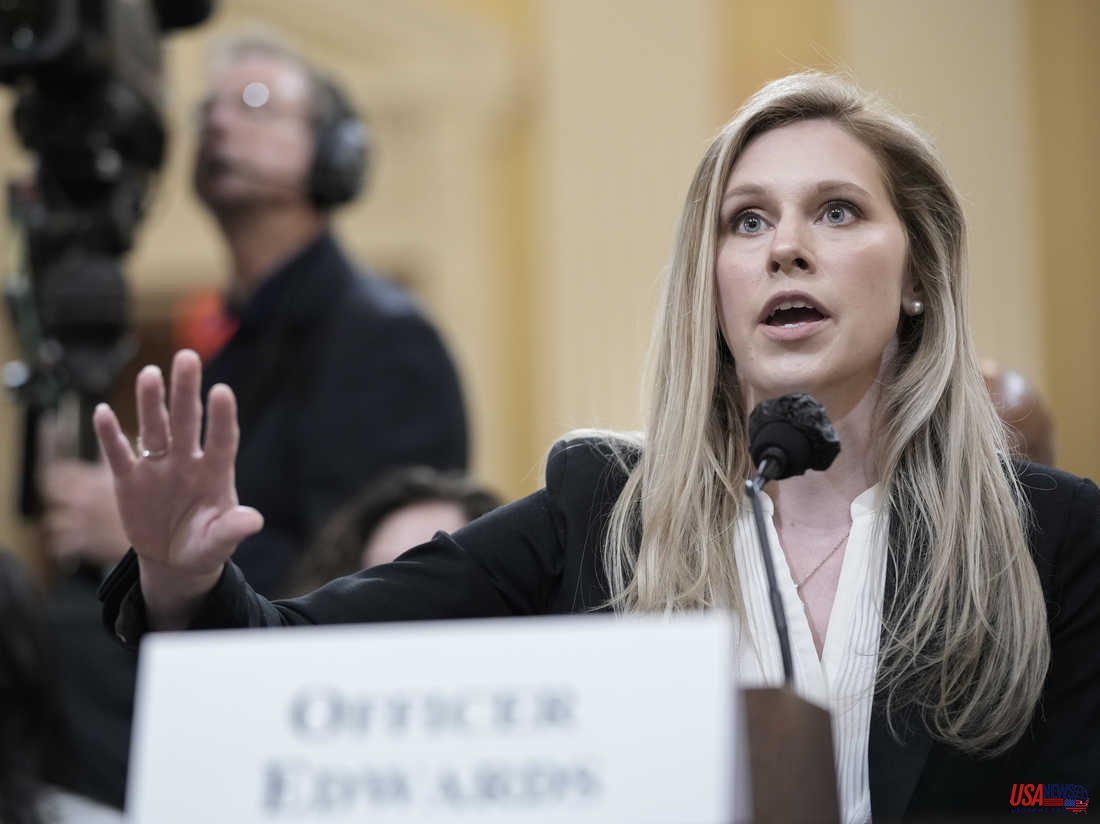 On Thursday night, the House panel heard from Caroline Edwards (U.S. Capitol Police Officer), who was described by the panel as the first officer of law enforcement to have been injured in the Jan. 6 Riot.

It also showed video of her being violently thrown to the ground by protesters who broke through a barrier at the Capitol. This was her first of many injuries that she suffered that day.

Edwards shared her story with law enforcement officers and family members of the victims.

Edwards stated that as the mob grew, her sergeant told Edwards "the understatement for the century: "Sarge, we're going to have to need a few people down here,""

To keep protesters away and give them time to respond, officers on the Capitol grounds took out bike racks.

She recalled feeling one push her backwards and putting her head on the top of her head as she and other protesters wrestled with bike racks. She got her foot stuck on the concrete steps behind her, and her chin touched the handrail. At that point she lost consciousness and fell down the stairs.

The following day, Sicknick was declared dead by D.C.'s medical inspector. Gladys Sicknick was with him at the hearing, and she could be seen hugging the other officers.

"All of a sudden, I see movement to my left and I turned to find Officer Sicknick holding his head in his hands. Edwards stated that he was "ghostly pale" and added that it was because pepper sprays make people turn red rather than white.

She said, "I looked back to see if he was hurt, what happened and that's when he got sprayed in my eyes,"

Edwards stated that another officer tried to take her away in order to decontaminate her, but they weren't allowed to because they were both sprayed with tear gas. A clip from that moment was also shown to the committee.

Edwards was seen hugging Sandra Garza, Sicknick's long-term partner, and saying "I'm sorry that you had to see that."

The panel had already shown a 10-minute-long video with new footage from Capitol that day. It included footage provided by a documentarian, who later testified.

Edwards opened her speech by describing her commitment to protecting elected officials and her patriotism. She recalls spending hours in freezing snow and baking sun to make it possible for lawmakers and shed blood, sweat, and tears to defend the building during the riot.

Edwards recalled her grandfather, a U.S. Marine who served in the Korean War. He lived his entire life with shrapnel in his body.

She said, "I am proud to be an American and will willingly sacrifice everything to ensure that the America my grandfather defended is there for many years to follow."

The committee stated that Edwards sustained a traumatic brain injury during the riot. She is now unable to return to the Capitol Police's First Responder Unit. She hopes to be back on duty in the latter part of this year.

Gus Papathanasiou is the chairman of the Capitol Officers' Union. He said that officers are monitoring the hearings in the hope they will encourage Congress to give the force more resources and support to cope with the "high-risk environment" it encounters every day.

He stated that the number of threats against Congress members has risen from approximately 5,200 in 2018 up to more than 9,600 last. A security review revealed that USCP needs to hire 884 additional officers.

He said that it's not about hiring more officers, but keeping existing officers. He also urged Congress to fix the "stark inequalities" in retirement benefits between federal law enforcement agencies and the USCP.

Papathanasiou stated that the force seeks to hold multiple parties responsible aEUR", including its intelligence chief, who is still in her position despite a no confidence vote. She also said, "Who perpetrated the attack, and those who conspired for it to happen."

He added, "We believe the Department of Justice is going to vigorously pursue all who have assaulted our officers or threatened the peaceful transfer of authority."