An incomprehensible Barça succumbs to controversy in Milan

Against the ropes in the Champions League. 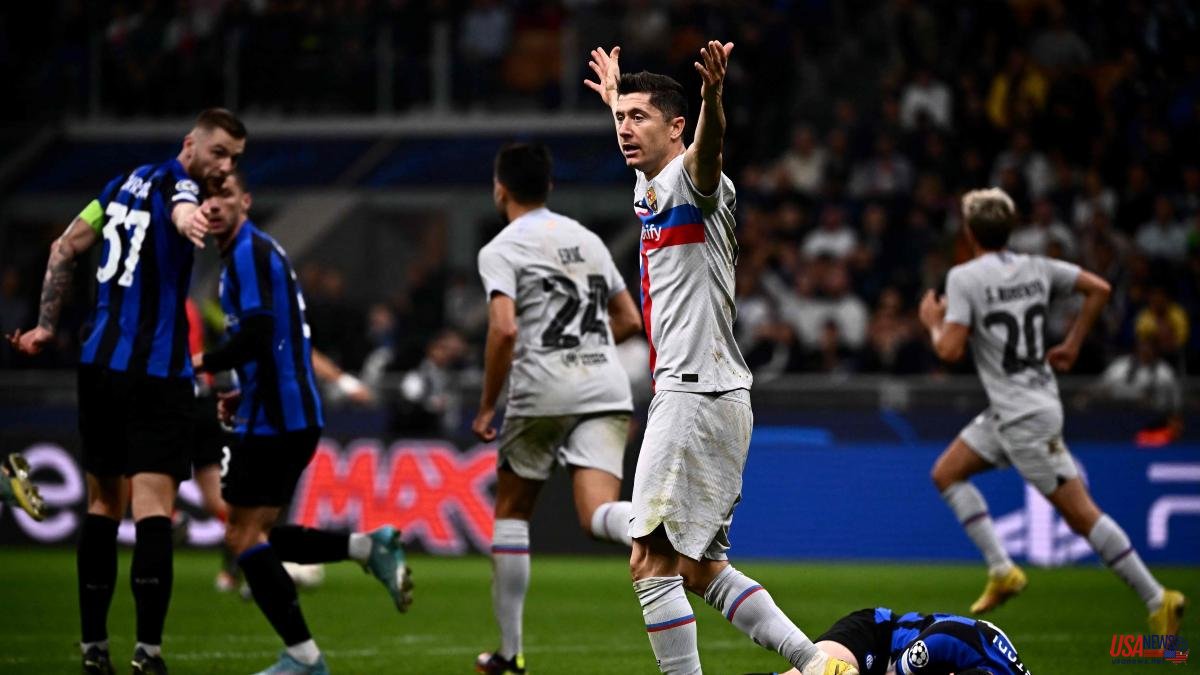 Against the ropes in the Champions League. An incomprehensible and disconcerting Barça completed a disastrous match in Milan, lost controversially and will have to go with lead feet next Wednesday at the Camp Nou. Another defeat against Inter cannot be allowed if they do not want to step foot in the Europa League again. Xavi asked for a team with personality, but what was seen at the Meazza was a blurred Barcelona, ​​with a disrupted system that was later rectified and that kneaded the ball ad nauseum for nothing. A goal from Calhanoglu in added time in the first half saw Inter move ahead of the Blaugrana in the group before paying them a visit. Everything turned out the other way around for the Barcelona fans, harmed by two refereeing decisions.

In the first they controversially annulled what would have been the tying goal. Yes, there was Ansu's hand before Pedri's shot, but they were involuntary. In the second the referee neither signaled a penalty nor went to the screen to see some hands from Dumfries. As incomprehensible as the Barça game.

The Blaugrana team no longer has a hierarchy in this competition, neither on the field nor against UEFA, and at this rate it will take time to recover it. In Munich he played well and fell. In Milan he did badly and also gave in.

Xavi arranged the eleven that was intuited but with an ingenious arrangement that did not work at all. With the ball, Barça only had three defenders (Sergi Roberto, Christensen and Eric Garcia), the wingers were occupied by Dembélé and Marcos Alonso and Pedri accompanied Busquets in a double pivot. The interiors remained for Gavi and Raphinha. That is to say an important agitation of the shaker by the trainer. The movement of pieces was very deep and it was necessary to see if they were greasy or squeaked. It was the latter.

The Blaugrana team used to finish most of the actions looking for Dembélé's one against many and the Frenchman did not make a good decision.

Meanwhile, Inter did what they always did. Wrap up behind and when he could throw counterattacks looking for the recovered Lautaro Martínez and Correa. From there rapid deployment, pursuit of the second moves and a lot of momentum, which was to the liking of Giuseppe Meazza, who roared. With this formula, Inter generated the first danger of the match, a shot from Calhanoglu that forced Ter Stegen to put the mitten. The Turk gave the warning of what would come after his feet. Because on the brink of the break, in added time, and against a contemplative Barça, Calhanoglu caught a ball on the edge of the box and took off a low and tight shot. The Meazza broke out and a Barcelona that was playing chaotic football lamented.

Because Inter's goal could have come earlier. His thrusts were selective but poisonous. Like one that ended with a hand from Eric Garcia inside the area. The referee went to review the shot on the screen and fortunately for Xavi's men, he noticed a previous offside by Lautaro Martínez.

But Barça already had the scare in the body. He hoarded the ball most of the time but it didn't even tickle Inter. Lewandowski, in his worst game, did not come into play, Marcos Alonso and Raphinha were lost in their new suits and Pedri was located far from the area.

Too hesitant and erratic, Barça had gotten into a mess, with the future in the competition compromised and with the need to fix the mess. Xavi corrected himself in the intermission, ordered a more orthodox 4-3-3 and placed Raphinha on the left wing. But the minutes fell and Barça's football was still monotonous. Nobody overflowed. Nobody shot. An inanimate domain. To top it off, Christensen was injured. Another center-back to the infirmary and pitch for Piqué, who can be seen playing at the Bernabeu. Xavi moved restlessly in the technical area and sent Dembélé and Raphinha to exchange sides. From the left, the Frenchman forced Onana to make his first worthwhile stop in a shot that ended in the post.

Barça needed a goal on a day when Lewandowski was being deactivated and the coach turned to Ansu Fati. Just leaving Pedri transformed the equalizer but did not go up to the scoreboard. Again the referee went to the VAR and annulled it by hand of Ansu. Certainly there was but it came from a rejection by the goalkeeper, they were involuntary and did not change the trajectory. In theory, this campaign was not going to be pointed out as an infraction. Xavi was like a basilisk but his team was still overturned and behind. The redeeming goal did not come and the referee did not call the Dumfries penalty. Barça continues to depend on itself, but the pressure reaches its neck.