An attack on one of the four granite panels in a rural Georgia monument, which some conservative Christians have called satanic and others have called "America's Stonehenge", resulted in the destruction of one of its four panels. 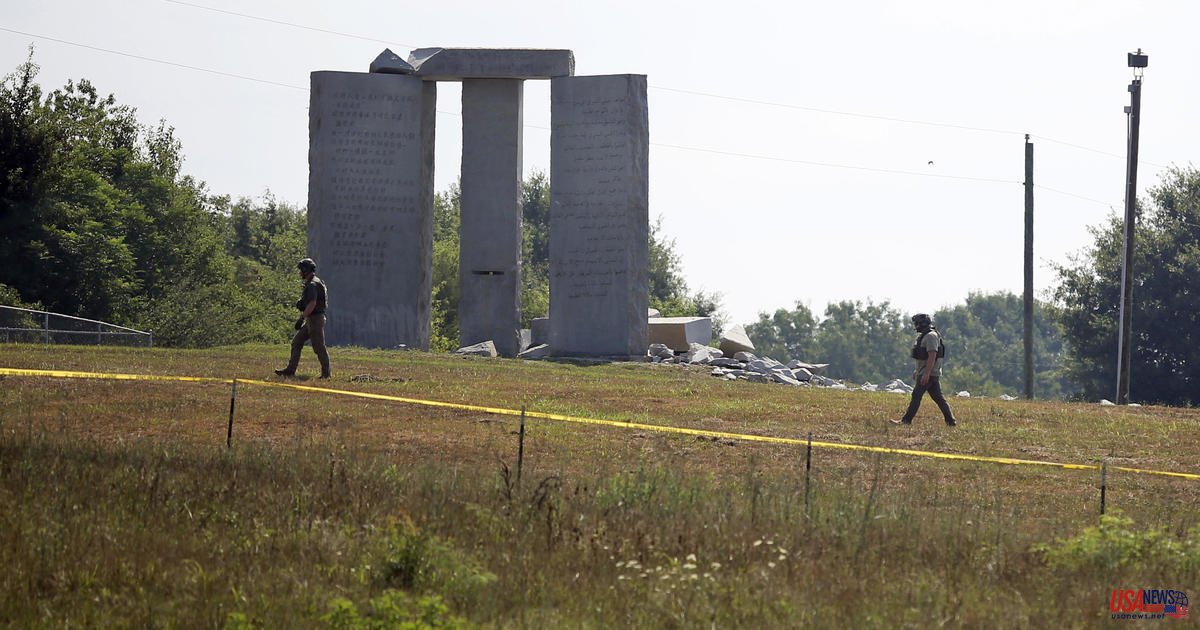 An attack on one of the four granite panels in a rural Georgia monument, which some conservative Christians have called satanic and others have called "America's Stonehenge", resulted in the destruction of one of its four panels.

According to the Georgia Bureau of Investigation, an explosive device caused damage to the Georgia Guidestones monument in Elberton. According to the Elbert County Emergency Management Agency, the explosion was captured on video cameras at 4 a.m. Photographs and aerial video show the panel that was destroyed on the ground.

On Wednesday evening, the bureau released surveillance footage showing the explosion and the silver sedan speeding off from the scene. Investigators want the public's help in identifying the perpetrators. There are no details about the suspects or possible motives. It is not known how many suspects were involved.

(2/3) These videos show the explosion, and the car that fled the scene just after it. No one was hurt. pic.twitter.com/8YNmEML9fW

Northern Judicial Circuit District attorney Parks White stated on Facebook that the agency had "many leads". According to him, the monument could be classified as a public structure and that explosives used to demolish a public building would result in a minimum of 20 year imprisonment without parole.

White stated, "Regardless of what your feelings are about the Guide Stones' origin, their meaning or the intent of the person who commissioned them, they are historical landmarks and this destructive act was an attack upon our community."

The mysterious roadside attraction was constructed from local granite in 1980 by an unknown individual or group, who used the pseudonym R.C. Christian.

These panels, 16 feet high, contain a 10-part message in 8 languages. It includes guidance on living in an "age" of reason. One section calls for the preservation of a world population below 500 million people, while the other calls for "guide reproduction wisely" -- increasing fitness and diversity.

It can also be used as an astronomical and sundial. They are often criticized for mentioning eugenics and population control, which has made them a target for far-right conspiracists.

Kubas stated that the monument gained notoriety with the advent of the internet. It became a tourist attraction on the roadside, drawing thousands each year.

The site was rediscovered after Kandiss Taylor, third-place Republican candidate for Georgia's gubernatorial primary on May 24, claimed that the guidestones were satanic. She made demolishing them part of her platform. In a late May segment, John Oliver, a comedian, featured Taylor and the guidestones. McCarthy stated that right-wing personalities, including Alex Jones, had spoken about them in the past but that they "kind of came back on the public's radar because of Taylor.

"God is God by Himself." Taylor posted on social media Wednesday that Taylor can do anything he wants. "That includes removing Satanic Guidestones."

McCarthy stated that the monument had been vandalized before, including when it was spray painted in 2008 and 2014. McCarthy said that the bombing was another example of conspiracy theories having a real-world effect.

McCarthy stated, "We've seen it with QAnon as well as multiple other conspiracy theories. These ideas can lead someone to try and take action to further these beliefs." They can also try to target institutions and people who are believed to be at the heart of false beliefs.

Kubas and other people see the stones as a guide for rebuilding society following an apocalypse.

Kubas stated, "It's up for your own interpretation of how you want them to be seen."

It is located approximately 7 miles north from Elberton, and 90 miles east from Atlanta, close to the South Carolina state border. Kubas stated that granite quarrying is a major local industry and employs approximately 2,000 people in the region.

Elberton police, Elberton sheriff's deputies and the Georgia Bureau of Investigation all are involved in investigating the incident. A bomb squad technician was called to investigate and the state highway near the scene was temporarily closed.

Kubas stated that the association had helped to remove vandalism in the past and will continue to work towards stabilizing the damage. Kubas said that local officials and community leaders might have to decide who pays for restoration, if any.

Kubas stated, "If it didn't appeal to you, you didn’t have to go see it and then read it." "But unfortunately, someone decided that they didn't want anyone reading it."