The Government, the Generalitat Valenciana and the Valencia City Council have signed an agreement this Thursday to finance the burying of the railway tracks that divide the southern neighborhoods of Valencia and to remodel the Joaquín Sorolla Station, given the foreseeable increase in travellers. 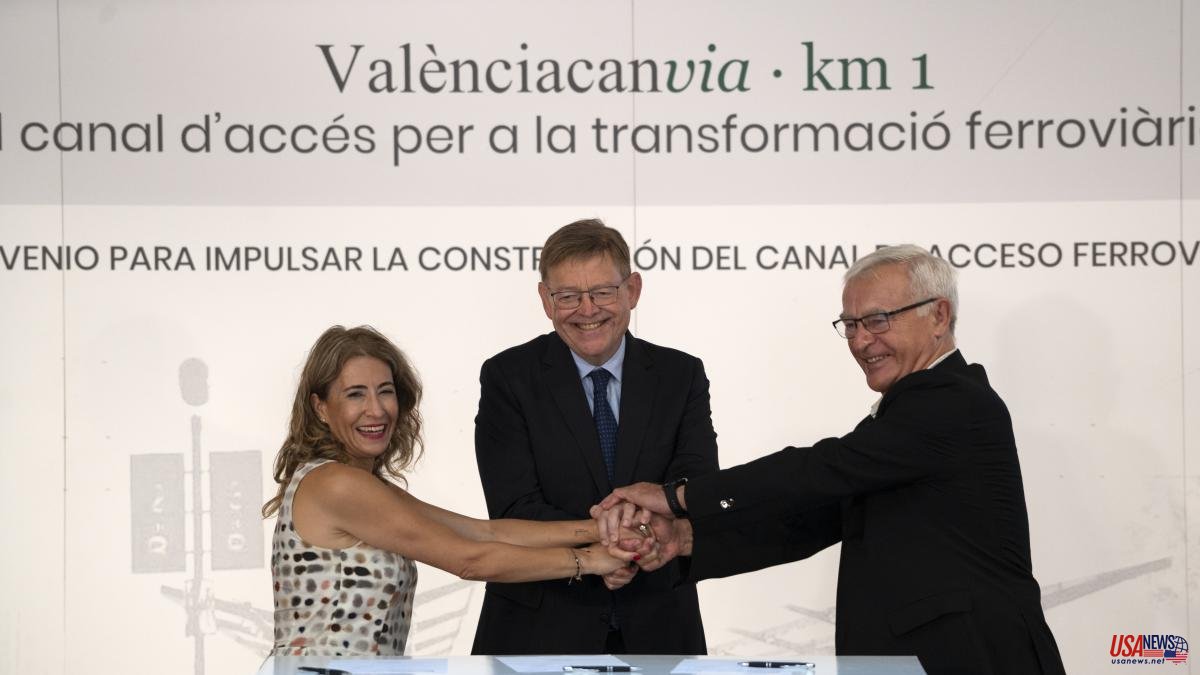 The Government, the Generalitat Valenciana and the Valencia City Council have signed an agreement this Thursday to finance the burying of the railway tracks that divide the southern neighborhoods of Valencia and to remodel the Joaquín Sorolla Station, given the foreseeable increase in travellers. Some actions that will involve an investment of 550 million -which will be covered by the three administrations- and that will be the most important work carried out in the city of Valencia since the 1970s. The works are expected to be completed in 2026.

Likewise, the Minister of Transport, Raquel Sánchez, highlighted that the works will represent a new impulse for the Mediterranean corridor. The representative of the Executive has recalled the "unequivocal commitment" of the Government with more than 1,700 million in the latest General State Budgets and works in all the autonomies.

For his part, the president of the Generalitat Valenciana, Ximo Puig, has emphasized that in the same way that a century and a half ago, Valencia demolished its medieval wall, "now we begin to derive the wall from the roads, a scar that separates the neighborhoods from the south".

The head of the Consell has shown his gratitude to the Government of Spain for responding to an old claim of the Valencian Community that despite the promises of 2003 had not been undertaken. "The difference is that the one who is speaking now is the BOE." Puig has assured that this new action "is going to change València and sew the neighborhoods of the south".

The mayor of Valencia, Joan Ribó, has been very happy, reiterating the importance of burying what is popularly known as scalextric to unite Extramurs and L'Eixample and be able to expand the Central Park. And it is that the works of the access channel in its phase 3 will involve the burial of the railway access channel to the Giorgeta viaduct.

However, Ribó did not want to forget the protest message and pointed out that this important action is nothing more than the beginning of other large infrastructures that have to be undertaken, such as the passing tunnel or the Central Station. "València cannot afford to miss any new train", indicated the first mayor who has asked the Ministry for "speed".

In a statement, the Ministry of Transport has explained that the agreement signed today is the basis for the development of eight actions, among which the new access channel and the remodeling of the Joaquín Sorolla station stand out. The works as a whole - complementary actions are contemplated such as security installations in the tunnels or their adaptation to the conventional width - have a value of 550 million euros.

Adif Alta Velocidad has already approved the bidding for contracts for 530 million euros. The railway manager will be in charge of 50% of the financing, while the Generalitat and the City Council of 25% each.

In addition, Adif AV will also fully finance the remaining 20 million euros, as a result of the increase in railway demand caused by the railway liberalization in Joaquín Sorolla.

Thus, this station needs comprehensive action given that in its connections with the north and south it has been estimated that more than twice as many travelers will circulate within five years: some 8.7 million passengers per year, compared to the current 3.8 .