America's Cup 2024: there are boats that fly 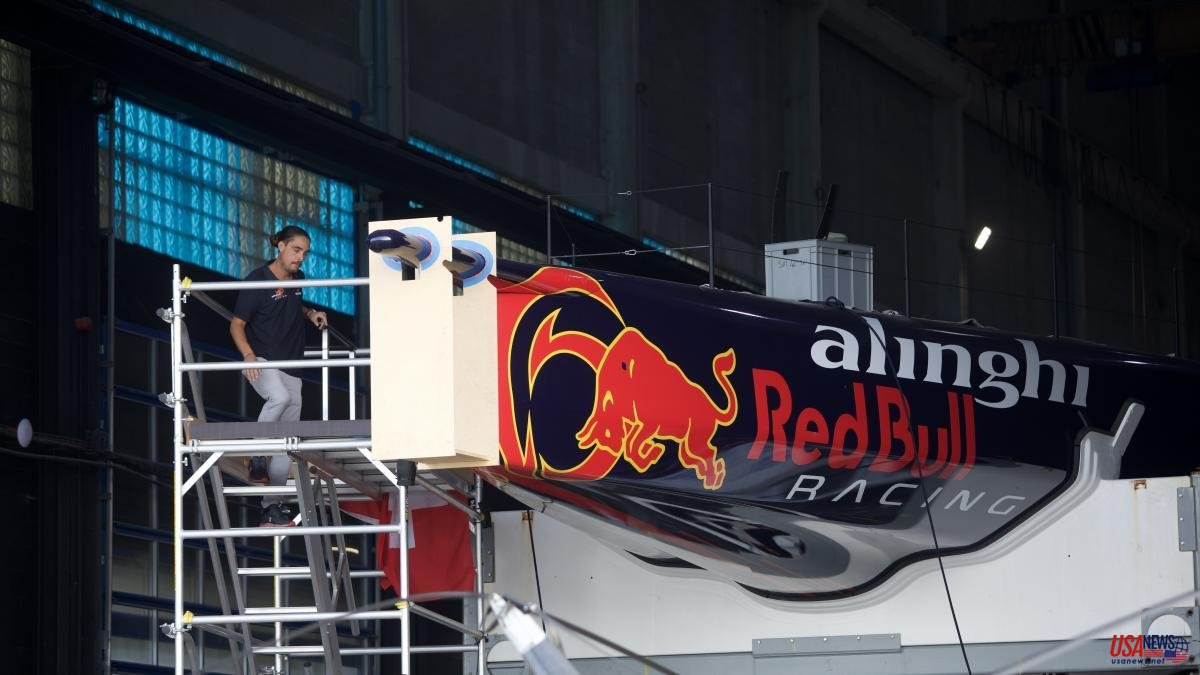 Point to a mannequin.

The mannequin rests in a corner of the Velissima restaurant, in Port Vell, where the people from Alinghi Red Bull have summoned La Vanguardia.

The mannequin is supposed to be dressed like the crew member of an America's Cup team. He wears a helmet, a bulletproof vest (yes, bulletproof), a knife to cut ropes if necessary, an oxygen cylinder and a radio transmitter.

Wait a minute, is this what a sailor looks like today?

“This is how a sailor dresses today,” insists Bühler. It is that at present, the America's Cup boats almost fly. They are like bulls that you must tame. And they speed up to 50 knots (about 80 km/h). And if you get confused, you can get shot. Imagine, falling into the sea at those speeds...

Before, ten or twelve years ago, the America's Cup crew members wore a different look. They wore caps and polo shirts and tanned skins, and in this guise they hoisted themselves onto their boats, whose speeds barely exceeded fifteen knots.

Matías Bühler has the appearance of a crew member of the present.

He is skinny and athletic and leisurely and he is Swiss, although his Spanish is Argentinized, since he was born on the outskirts of Buenos Aires.

Bühler, a member of the piloting area, tells me that he has been in Spain for thirteen years and that he has attended four Olympic Games, all of them ranging from Beijing 2008 to Tokyo 2020, one of them as a sailor (Rio 2016) and the rest, as a coach.

He also says that now he feels at the center of the world: he is part of Alinghi Red Bull, one of the five teams confirmed for the 2024 America's Cup, a title defended by Team New Zealand.

The America's Cup to be held in Barcelona.

–Most competing sailors dream of an opportunity like this. The Vendée Globe, the Ocean Race, the Olympic Games, the America's Cup... And I'm here –Bühler tells me.

And it is justified:

–This is the F-1 of sailing. And who joins a team focuses on driving. Searching for sponsorships or talking to federations is no longer on his daily agenda. In the Copa del América, the budgets are high and guaranteed.

(According to some, the America's Cup is the third most followed sporting event on the planet, after the Olympic Games and the Soccer World Cup)

The people from Alinghi Red Bull have already settled in Barcelona. Some of its members share apartments and pedal down from the center of Barcelona to Port Vell, whose waters they cross and test.

This Thursday afternoon, La Vanguardia has been able to get on an auxiliary ship of Alinghi Red Bull. We navigate the waters that will host the America's Cup, two years from now.

We are moving at 35 knots and the sea is choppy and the ship is shaking.

– And the competition boat? –We asked a communication manager.

–It's in the hangar, undergoing maintenance. We'll show it to you for a moment, but don't take pictures of me from this position or that...

Before we set out on the launch, he has taken a few photos of the titular ship. He never gets too close to the boat, he avoids compromising images.

Vessel data and characteristics are handled with caution. As in the F-1, engineers, pilots and mechanics sign confidentiality documents.

The America's Cup has put an end to espionage. In other times, divers took advantage of the night to dive into the shadows, when no one was looking, and take pictures of their rivals. That involved denunciations and even risks, so the organization had decided to take control.

When a boat goes sailing, it is usually escorted by a boat from the organizers. It is these, the organizers, who take data and images and share them among the contenders for the title.

Until then you can spy, no more: it is a regulated espionage.

– And what are you doing here? This is about boats! –I tell him.

–Well, in the team, most of the engineers are naval. But aeronautics also counts. Increasingly. Today, the boats almost fly. And it is necessary to analyze designs linked to aeronautics to stabilize the ships and their speeds.

And he tells me about cavitation, which is the hydrodynamic effect that occurs when steam cavities are created in the water, as when the ship rises and the sharp edge (the keel) barely touches the sea.

-If aeronautics gains so much strength in navigation, where is the America's Cup going? – he is asked. In ten years, will we see ships sailing at 100 knots...?

-Well, that's where we engineers are: we have to find out how far we can keep them stabilized.

But where does the traction to navigate come from?

The traction is provided by the power group, the power generators, four crew members who row or pedal, as each team decides. At Alinghi Red Bull there is a track cyclist who had been an Olympian. The British Ineos are looking for recruits in their UCI Pro Tour squad.