While a series of crises loomed over proceedings at the United Nations General Assembly this year, Zuzana Caputova, Slovakia's President, reminded the audience that "we cannot save the planet if you leave out the vulnerable -- women, girls, and minorities." 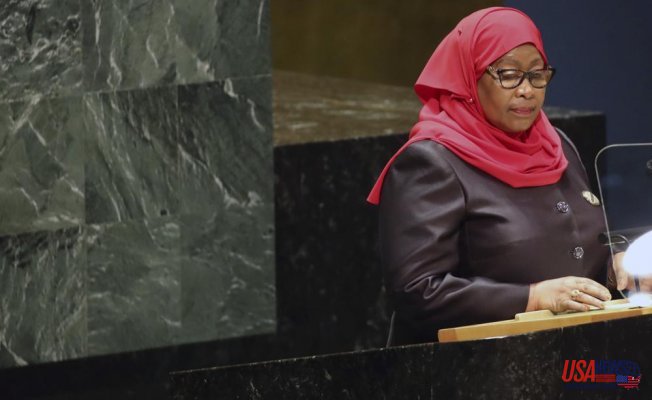 Gender parity at the most important forum for leaders in the world seems still far away. On Friday, eight women will speak at the U.N. General Assembly. This is more than twice the number of women who spoke on the summit's first three days -- five.

Friday's rostrum will be taken by three vice presidents, five prime ministers (including Sheikh Hasina of Bangladesh and Jacinda Arden from New Zealand) or their addresses in a prerecorded audio.

On Thursday, Hassan was all that was present at the General Assembly.

Although the number of women who spoke over the four first days was less than 10%, this is an improvement on last year when only nine women spoke during the session. There are three morefemale heads or government officials than at this point in 2020.

Kersti Kaljulaid, Estonia's President, stated Wednesday that "There can not be democracy, security, or development without one-half the humankind." This statement also highlighted women's vulnerability within society.

During a week that has been plagued by ever-looming threats of conflict, climate change and coronavirus, the theme of vulnerability was at the forefront. The majority of speeches have been characterized as pleas at the precipice and have scuttled the summit's goal of "building resilience through hope".

The General Assembly was not the only one to make dire predictions. High-ranking officials called for a more aggressive responseto the security implications of climate changes and made global warming a central part of U.N. peacekeeping operations. They pointed out the dangers of global warming, including conflicts in Africa's Sahel and Syria, and urged that more action be taken to address them.

Numerous leaders have spoken already, and many have even left New York. The session will be closed Monday afternoon by some of the most awaited countries: North Korea, Myanmar, and Afghanistan. These are all familiar names but have been in the news lately.

Friday promises fireworks and a lineup of speakers from countries that are roiled in internal and external conflict.

The proceedings will be opened by the president of Cyprus, an ethnically divided country. He will soon be followed by the leader of Lebanon, which is also in turmoil. In the morning plenary, the addresses of Mahmoud Abbas, the Palestinian president, and the prime minister from Armenia will be given.

Their victory has given me tremendous hope. It's a shot to the arm, at a moment when we aren't even allowed to talk openly," a former Kashmiri rebel told The Associated Press last week about the ascension of the Taliban in Afghanistan.

India and Pakistan, which go Saturday, are both historically eager users of the "right to reply" function, which permits diplomats to launch polemics in defense of their countries in response speech from hostile nations. After the speeches of the leaders, Friday night is when this window opens.